June – the month of the longest day. The highest number of sunshine hours available per day, the plants revel in the warmth and (inevitably!) the rain. Summer plants are putting on lots of growth ready to burst in to flower. Late spring flowering plants are gathering as much food as they can to store for next year’s flowers before they disappear again for the summer. 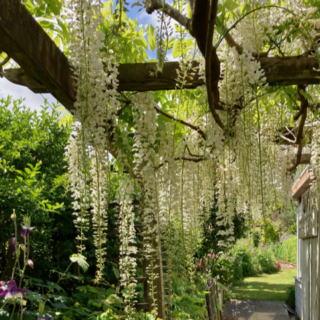 Summer is the time to prune stone fruits – cherries, plums, apricots etc, preferably from late June and into July. If they are pruned in cold, damp conditions they can be susceptible to silverleaf, a fungal disease.

Choose a dry day. Cut the lead shoot on each branch back by half. Cut any side shoots back to a couple of leaves. Making sure the centre of the tree is open to allow air to circulate freely will reduce fungal diseases, and will also allow more sunlight to reach the developing fruit. Thin out plum fruit now as well.

Give heathers a haircut too, to keep them in a good shape and stop them becoming straggly and woody.

Trim your topiary – pay close attention to box and look out for signs of boxtree moth caterpillars (webbing on the leaves, nibbled leaves and defoliated stems) and box blight (leaf spots, bare patches and dead stems). Then give the hedge or bush a good feed and a thick mulch (but don’t let it touch the trunks). Evergreen hedges can be cut now as well, but always look very thoroughly through the hedge for any bird’s nests. If you see any, the hedge will have to wait.

Regularly deadhead and feed roses to get them to flower for longer. If you have repeat flowerers then they should keep going all summer. Some, however, will only flower for a little while, such as the fabulous rambler ‘Rambling Rector’. I planted this once in a town garden that was 7m long. My neighbours were not impressed! But after a couple of years the display of flowers was amazing. 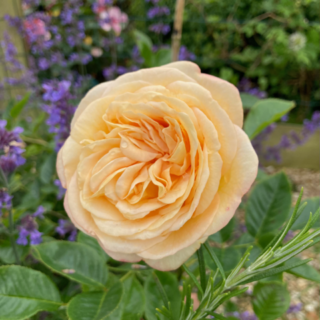 Prepare your pots – fill them with a gritty mixture of compost and something to keep the structure open such as perlite or horticultural grit and water them. Some believe that placing cuttings around the edge of a terracotta pot works the best, possibly because the terracotta is slightly porous and allows oxygen through. But I have found plastic pots work just fine, and reusing them again and again is helpful.

Take a sharp knife or sharpened secateurs and give them a wipe with something to disinfect them, such as surgical spirit. For softwood cuttings, take about 10-15cm of the end of the new growth, make sure it does not have a flower bud on it. Pop it straight in to a plastic bag to minimize water loss.

Strip off most of the lower leaves leaving only two or three at the top, depending on how large the leaves are. If the leaves are very big, cut them in half. Leaves will lose water and the cutting has minimal ability to pull water up from the soil.

Bury the cuttings at least three quarters in to the soil, you can put several in each pot. Don’t firm the soil too much or oxygen will not be able to reach the nodes on the cutting where roots will grow from. Cover and seal in a plastic bag, particularly for very delicate cuttings.

For semi-ripe cuttings, follow the same procedure but take cuttings from the woodier parts of the stem. You can also pull off a side shoot from its parent stem by putting your thumb nail against where the shoot meets the stem and gently pulling downwards. The shoot should come off with a little section of the bark from the parent stem on the end, the ‘heel’. Sometimes these can root better.

Personally I don’t use a hormone rooting powder but this might help your cuttings succeed.

Wait until you can see fine roots at the bottom of the pot before potting on your cuttings in to individual pots. Grow them on in a frost-free place this year before planting out next year. 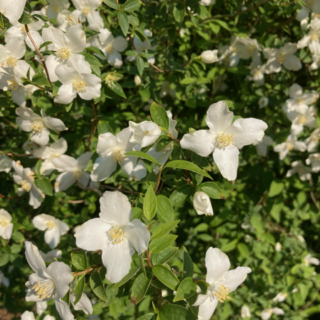 There might be a little gap in the herbaceous garden between spring flowers and summer ones, often alliums and hardy geraniums can fill this gap and keep the borders looking colourful.

If you haven’t been around and tidied up spring flowering plants such as forget-me-nots just yet, now is the time to do it. Deadhead any tulips left in the ground so they can concentrate in pushing food down to the bulb for next year, and not creating seeds. Clear away any dying bulb foliage.

If you have any gaps in your borders and don’t want to spend a fortune buying pot grown plants to put in them, sow seeds of annuals, some will flower in 6 weeks from sowing and keep going in to the autumn. Choose from cornflowers, poppies, love-in-a-mist, calendula, nasturtiums or sunflowers and more.

Deadhead foxgloves and aquilegias if you don’t want too many seedlings next year! Some of the new varieties of foxgloves, such as the Illumination series, will not produce seed though. 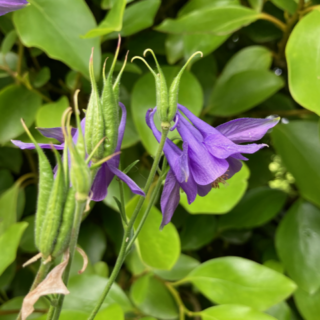 Make sure you have enough plant supports in the borders as the summer flowers grow taller. We can still have some rough and stormy weather during June, and this will quite easily flatten the herbaceous border!

Feed all pots regularly. Bedding, perennials, roses, fruit, trees, anything in a pot will need food at least once a fortnight during the summer. 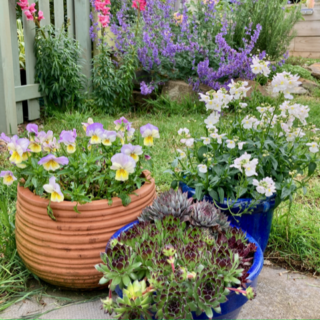 Check your first new potatoes if the first flowers have opened, they could be ready to turn into lovely summery potato salads!

All tender vegetables can go outside by now, we are pretty much guaranteed not to get a frost on the Roseland! It has been rather chilly of late though overnight, about a week ago there was indeed a frost in the Midlands. Plant sweetcorn in squares rather than rows so the plants can pollinate each other.

Remember to keep cutting any cut-and-come-again salad crops or they will try to flower. You can sow more throughout the summer.

If peas and beans are ready, start picking those too as it will help keep them producing for longer. If any pods start to mature, the plants will slow down as they ‘think’ they have produced the seeds that they need to.

Check early sowings of crops such as carrots or beetroot which might even be big enough to harvest. Mine took such a long time to germinate this year though I don’t think we’ll be harvesting them for quite a while yet. I probably should have watered them during the dry spell! 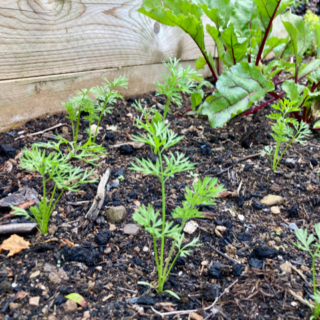 Papaver Garden Design and Tuition (link to go on this text)