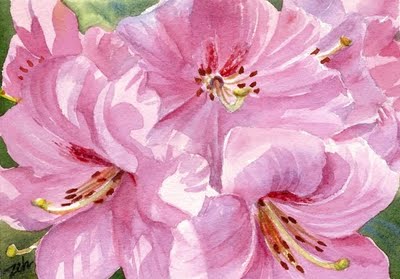 I try not to get too excited about the weather. It is what it is and I would rather worry about things I can do something about. However it will be apparent to regular readers that it does fascinate me and I thoroughly enjoy the little weather station I have here that records wind speed, temperature, humidity and most importantly wind direction. So I expect you have guessed that talking about the seasons and weather generally I am approaching the topic of our most unusual winter.

Last year was extreme with the ice and snow and perhaps more unusual because of the prolonged cold period. This year has been unseasonably warm and wet and has brought daffodils and camellias out early. I have a beautiful pale pink azalea which flowers in mid- May which is in full bloom now and sits next to a Mrs Popple fuchsia which is still in full flower from last season. Those two must be looking at each other wondering who has got it right or wrong! 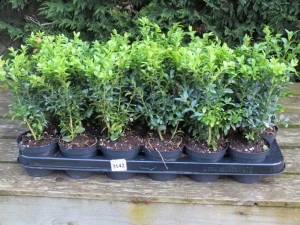 Of course we all know that, early though spring may be, February can be the worst month of the year and if we do get a good cold spell those early buds will be knocked back hard and everything may end up late for spring and summer growth. Spare a thought to for the bare root hedging growers. I am waiting for 250 box plants to complete a garden for a customer. We ordered the box hedging in November to take advantage of the bare root season when hedging is lifted whilst it is dormant and is therefore much cheaper as it hasn’t had to be tended in pots.

The order was expected before Christmas but the growers still haven’t lifted it because it is still not dormant. Nothing has stopped growing because of the mild winter. This does not bode well for roses either. My pal in St Mawes has a beautiful climbing rose up the side of her house which is in good bloom now. To get the best of summer flowering, roses need 5-6 weeks ideally of cold weather, complete dormancy, to gather their strength and bloom well for the summer. But as David Hockney says, when the weather man says the weather is bad you have to ask the question ‘bad for whom?’ If you are a daffodil grower or a sheep with lambs you may answer the question differently. 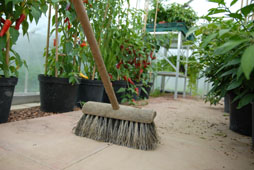 The slightly colder snap in mid -January brought out the sunshine and so cold greenhouses are getting the benefit of light and heat. However, now is a jolly good time to clean out those greenhouses and make sure they are clean and tidy for the coming season. Despite the autumn clean out I still find nasties lurking, particularly slugs and snails under the pots and their rims that have come in for a rent free winter warm up.  There is a lot to do in February  to prepare for the coming months and I don’t know about you but I am weeding regularly as the growth on the nasty little annual weeds and the perennials is still shooting up. So jobs to do this month:

–          Plant broad beans in pots in the greenhouse or straight into the soil if it isn’t too cold, mine were planted in January and are well up already. They are hardy plants and pretty much unaffected by temperature.

–          Revive stored dahlias if you lifted them. I never lift mine, they have a 50/50 chance in my garden over winter. But if you have stored them in the shed its worth putting them on shallow compost, bring them into the light and give a little water to start them off. 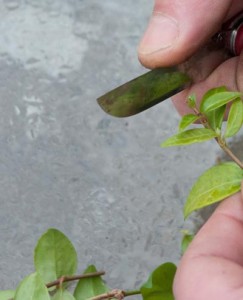 –          Hardy garden perennials will start to shoot and you can take basal cuttings from Achillea, chrysanths, lupins and delphiniums to name a few. Just scrape away the soil from around the plant in the garden to expose the new shoots, cut with a sharp knife as near to the crown of the plant as possible and pop in a pot with a plastic bag over to retain humidity whilst they root.

–          Start off tender bulbs like begonias and gloxinia. Just half cover with compost in a tray and when they shoot pot them up.

–          Prune late flowering shrubs now and up until the end of March. These are shrubs that will flower later in the season on this year’s wood and include buddleias, caryopteris, ceanothus (actually mine is in flower now but I will still trim it up), hardy fuchsias, hydrangea paniculata. Mahonias that have become leggy and woody can also be cut down very hard now to re generate.

–          I prune bush roses hard now rather than waiting for March. Remove dead, diseased and dying branches, weak shoots and crossing branches and shorten all stems by at least half, aiming for a goblet shaped bush.

–          Plant tomato seeds now under cover of course and sweet and hot peppers too.

Get going as soon as you can and certainly if the weather is conducive. Spring is just around the corner – honestly!