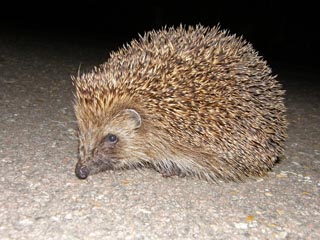 I was coming out of Veryan the other night and had to stop for a hedgehog to cross the road. Having registered my delight on returning home, my husband tells me the little chap lives at Margery’s, what a sensible fellow! Now in the ten years I have been here I have never seen a hedgehog and we know they are endangered and that the various stewardship farming schemes should encourage them. So, imagine my surprise when less than a week later we find a hedgehog wandering across our car park in broad daylight.

Afraid that he may be squished or investigated by one of the cats we put him carefully in one of the fields and he burrowed away into the hedgerow. Later that day my tom cat arrived with a much scratched nose, perhaps he had tried earlier to bring the hedgehog home and thought better of it for obvious reasons! Since then I have seen three or four hedgehogs in our field and lane and I hope this is a sign of a multiplying population of these lovely little chaps who eat slugs and snails and love the field margins we are now all leaving. Pleas ensure you check bonfire piles that have been accumulating for November, they love to hide in them. 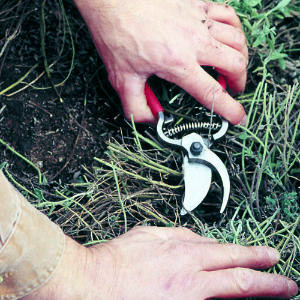 So, November is here and there is plenty to do in the garden. I started my autumn clear up in the herbaceous borders whilst the weather was still warm in mid-October. Just cutting down the old stems of spent perennials, hoeing off and removing the weeds and having a general tidy up. I was particularly careful because I was just amazed by the abundance of ladybirds most were still active and flying but I have no wish to disturb them unnecessarily and I counted their spots to make sure we had no alien seven spot invaders. (As I re-read the article I wonder how many say perhaps I should get out more if I am starting to count spots on lady birds!!)

All the debris from the borders was put on the compost heap. Those heaps which are now full will be covered with cardboard to keep in the heat and keep out some of the rain whilst empty bins will keep being filled to keep the rotation. I don’t put really pernicious perennial weeds in the heap as they can often sit there waiting to come up again next year but all annual weeds go in and all the plant stems, some of which I cut into smaller pieces to help the rotting process. If a heap is properly balanced with layers of grass clippings, vegetative matter, a little newspaper, veg peelings etc. then no accelerant should be necessary. 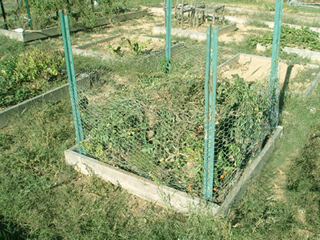 If you have loads of leaves then a separate bin made from chicken wire is a must. Just pile the leaves in and let them rot down. Beech and oak leaves are best, but all leaves will rot down but just not as quickly as other matter so keep them separate from other compost. Alternatively dig a trench where your runner beans are to go next year and keep filling it with organic matter throughout the winter.

If you have raised vegetable beds there is no need to dig them over. In fact you may seriously disturb the eco system that is being created. Just pile organic matter on the top and let the winter weather do the rest. Well-rotted manure is ok but I prefer to mix that with my compost whilst still in the bins. If the horses have eaten nettles this will help them rot down rather than re-establishing in my veg bed. Further do not use horse manure on beds where you want to grow root vegetables. The nutrients in manure will just encourage huge leaf growth rather than root growth and don’t put fresh manure around shrubs, it will burn. Horse manure that isn’t properly rotted is more trouble than it is worth!! 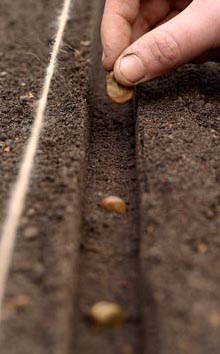 If you do not have raised beds then I regret a little digging over now is worth it. Just leave big clods of turned soil and let the frost break them up. Did I just say frost! Well there are all sorts of dire predictions for this winter but I am keeping my hopes up for a proper Cornish winter not one of those imported from up country like the last three years!

If the weather is mild then you can sow broad beans now. Frankly I have never understood why. It seems more sensible to me to sow seed in pots in January and plant out later but it can be done now if you want to. Actually that reminds me of an article I wrote once about sweet peas and sowing them now too. A certain stall holder of Veryan said it was rubbish, sow them in spring. I went one better and sowed them in May this year and I picked the last on 10 October. So if time is short in the spring sow broad beans and sweet peas now, if not, I think it’s worth waiting.

A couple of my regular readers have asked me to go back to putting in a comprehensive list of things to do each month. They are keen gardeners but say that they know how to do it but when to do it is the issue. So here goes:
· If you are buying seeds by mail order then it’s time to put that order in now. Most people leave it until the Christmas hols and then they are delayed in the rush.
· Clean up those herbaceous borders as above.
· Prune shrubs to shape now where necessary as long as they flower after next June. If they flower before June, camellia, forsythia etc., leave them alone, you will cut the flowers off!!
· Plant tulip bulbs now. Planting earlier and you risk the dreaded virus tulip fire. They need good drainage and need to bake in the sun in summer after the leaves have gone.
· Plant lilies between now and April whenever the soil is workable
· Buy bare root roses, bare root hedging and fruit trees and plant now. Bare root is cheaper and all you are asking a plant to do in autumn is put roots down. In spring you are asking it for roots, shoots, leaves and flowers – exhausting!
· Split and plant herbaceous perennials.
· If you missed spreading lawn seed then turf is best laid now unless the ground is frozen.
· All winter veg will taste better if you pick after a frost. The starch turns to sugar and there is a huge flavour difference. This applies to shop bought veg too!
· Insulate your greenhouse after you have cleaned it thoroughly to stop all the pests overwintering therein.

That should keep you going until December!