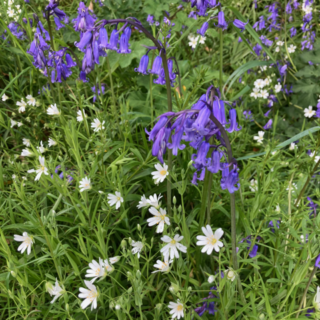 I think May has to be the prettiest month. Whereas October can produce glorious colours, there is nothing like the blanket of spring flowers that appear in May. The hedges and verges are filled with whites, blues and pinks of stitchwort, wild garlic, bluebells and red campion alongside the fresh green of new grass and unfurling ferns. The earliest fledglings appear in our garden, usually a slightly scruffy robin by the house, and young blackbirds further away.

The news that peat will be banned in all compost sold to the public by May 2024 (but not to professionals until 2028) has got companies working harder to find suitable alternatives. There are several varieties available already, some better than others, and the ones I have tried dry out twice as quickly as peat compost. But there are ways we can work around this.

Yes the peat-free composts will increase water use, so it’s a good idea to prepare now by setting up water butts on available downpipes from any roofs – the house, sheds etc. so you have plenty of water to use. It also helps to mix in a little soil and some home-made compost which has been made from materials such as cut grass as this seems to help with water retention.

Place pots in a tray so when they are watered, any water that flows straight through is captured. This is especially helpful when the pots have dried out as they can be left to soak up the water. Keep an eye on your veg in pots and in peat-free growbags as they will need more even water than normal.

There is an abundance of blossom in May. So many shrubs and trees in flower, the effect is stunning. From highly scented rhododendrons to crab apples so thick with blossom that when the wind blows it is like a snowstorm beneath them.

This morning I visited a client’s garden with an array of azaleas – simple species plants, to big blowsy varieties (although some rhododendrons are even more blowsy!). That these tough-leaved plants can produce such highly coloured, amazing flowers is incredible. 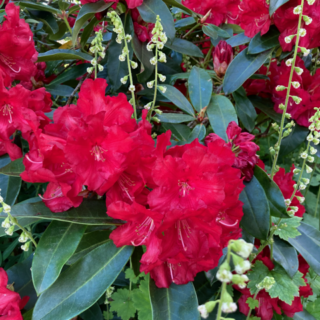 I also saw, well smelt it first, a terrific lilac in full flower in Tregony as I walked past. 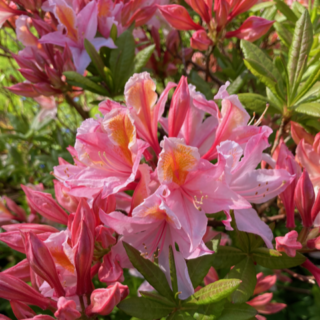 have flowered. Abelia can be pruned in May, mine could certainly do with a haircut this year! Cut out any old, thick stems right at the base so the plant is less congested and trim back the outer growth to the shape and size you would like it to be.

Evergreens such as Lonicera nitida and laurels can be trimmed now. Choose a dry day so the plant can seal up any damage and prevent the entry of any pathogens. Lonicera nitida will need trimming several times in the summer if it is used as a pruned hedge or topiary, or it will get very whiskery!

Ribes (flowering currant) should be pruned now too, to keep it vigorous and make sure there are plenty of flowers next year. Immediately after flowering, cut out one third of the stems at the base, starting with the oldest ones.

Salix (pussy willows), deciduous magnolias and Chaenomeles (Japanese quince), can be pruned now only if necessary. As can Fatsia japonica for strong new growth and good flowers next winter, and any camellias that have finished flowering a need a tidy up.

Be careful not to prune trees such as acers as they will bleed and potentially weaken the tree. Additionally the sap could attract pathogens.

May is the month to take softwood cuttings of shrubs, although cuttings can be taken over the next three months or so. As the new growth hardens they become semi-ripe cuttings instead, which I will describe next month.

Herbaceous borders should be really ramping up now. Later flowering plants will be growing strongly and spring 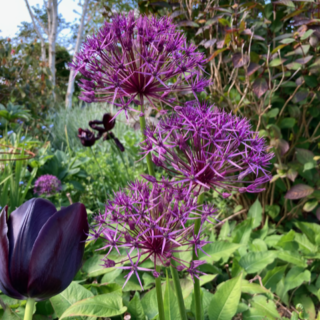 flowers should be in full bloom. May is the month of the allium (here in Cornwall anyway, it might be a bit later further north!) and they make such great border plants as well as coming in so many different sizes and colours (in the scale of purple/white). Allium pic

Harden off any new plants you have grown from cuttings or seeds before planting them in the border or pots, and remember to water all new plants really well in their first summer. Don’t forget any trees and shrubs that

Dahlias and other more tender plants can be planted out, if they haven’t already.

During May is the time for the ‘Chelsea chop’, if you practice it. This helps prevent later flowering perennials from growing tall and falling over, and the stems that have been trimmed will also flower later, extending the flowering period of the plant. Loosely trim back about a third of the extending stems by about a third. You can trim perhaps the front side of the plant, or around the edges, or select random stems throughout.

Plants such as large hylotelephiums (sedums), asters, heleniums, phlox (although I’ve generally found that phlox doesn’t generally flop and it flowers for a long time anyway), echinacea, perennial sunflowers and rudbeckia can benefit from the Chelsea chop. 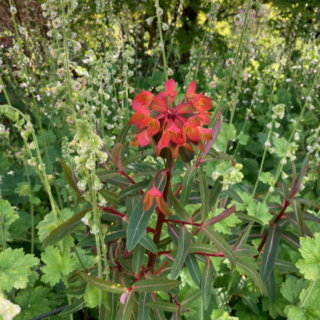 Another reason I’ve found for later perennials flopping over is too much food – perhaps too rich a mulch applied over winter. Don’t use garden compost with manure in it, only green material, or buy in composted bark. This will improve the soil and moisture retention without adding too many nutrients.

Time now to harden off carefully tended seedlings and plant out into your well-prepared, well mulched vegetable patch. Water them in really well, especially if the weather continues dry as the forecast suggests for the first half of May.

Whether your tomatoes are indoors or outside, remember to pinch off side shoots to prevent the plant sprawling and not producing as much fruit.

If you have any fruit growing in containers, start feeding regularly from flowering with something like tomato food, and make sure they are watered well over the growing season too so you get a really good crop.

Take softwood cuttings of woody herbs such as thyme (this is my usual candidate for expiring over the winter!), rosemary, hyssop and sage to grow on as reserves for any that might disappear next winter. 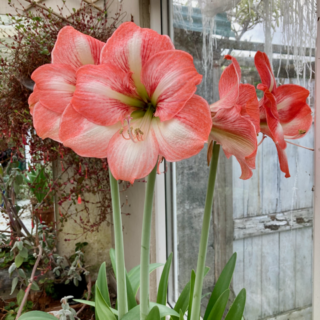 If you get the chance, do get up early to enjoy the dawn chorus at this time of year. I was up at 5am last weekend on a fabulous sunny morning and the birds were amazing. Enjoy May!

Papaver Garden Design and Tuition (link to go on this text)