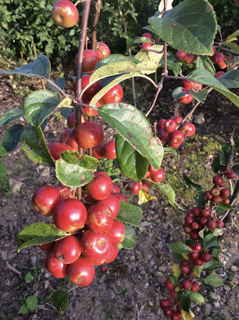 Despite the little burst of warmth we have all experienced this last week, we are most definitely into autumn now, however you want to define it. The mornings are wonderfully dewy, the sun much lower in the sky and temperatures of sunny days balmy rather than scorching. We confess, we love the ‘transitional’ seasons of spring and autumn, most of all. They just have that sense of expectation that somehow summer and winter don’t have, and for gardeners, the path of expectation seems somehow more appealing than the destination sometimes. You may disagree, and that is great if you do, because that means all our gardens will look different.

There is still plenty of beauty in the garden, albeit less in the shape of large blousy blooms and more in the joyous fruits and berries of the season. Helen set up a big new bed this year based solely around fruits (mainly crab apples and rowans in a variety of colours), berries (based around roses which produce special hips rather than magnificent blooms, and callicarpa) and autumn leaf colour. Despite it being its first year, she is thrilled with the result and has just potted up the first dozen jars of crab apple jelly, all from one small tree. Coupled with the asters, dahlias, salvia and Japanese anemones still out in force, and a rather lovely rose (Mme Isaac Pereire), there is a feel that the garden is still giving plenty, despite it being October. 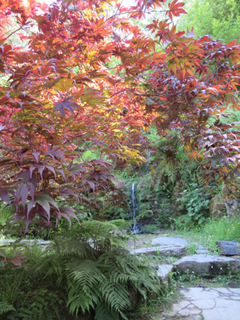 We may have mentioned this before, but we think it warrants a reminder that there is now the opportunity to plant some hardy annuals in readiness for next year. Hardy annuals, as their name suggests, will withstand a bit of winter chilliness, and even frost as long as it’s not rock hard for weeks. We have planted cornflowers and larkspur, and sweet Williams. The cornflowers waited a whole 2 days before sprouting, and the sweet Williams not much longer. The larkspurs are also up, but took a week or so.

Two weeks later, they are 3-4” high. They will slow right down soon, but we reckon we can put them out now ready for next year. Just watch out for slugs – on which note, has anyone else noticed just how HUGE and orange they are this year? Anyway, part of the reason for telling you that is that if you think are too late to plant seeds, most likely you are not – give it a go. Grass seed and wildflower seed also germinates well at this time of year, so again, go for it.

And if you have somewhere bright and undercover, don’t forget that many herbs (we are thinking especially of basil, coriander, dill, all of which we have set off again in the last couple of weeks) keep germinating at this time of year, so you can have nice fresh herbs all winter long. If that’s something you won’t have time for, or can’t be bothered with, try freezing some you have left from your crop or buy, in olive oil in ice cube trays. That way, they are as good as fresh, and are probably in the medium you most likely to use them anyway. 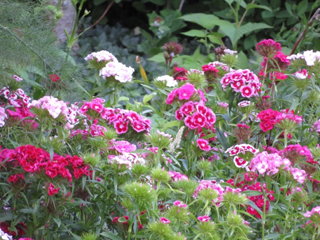 There are also plenty of salad crops that germinate well – some of the cut-and-come-again types still work well, and the winter leaves such as mizuna, rocket, lamb’s lettuce and other slight exotics provide a peppery punch this time of year. We read recently that the most common supermarket item we buy and ending up ditching before use (probably as a soggy, almost liquid mess) is bagged salad.

Not only is it wasteful, it is expensive. But If you grow your own on a small scale, you probably have as much as you need, and it keeps growing rather than liquefying at the bottom of your salad drawer, if you don’t happen to fancy it that day. Our rule is that there always has to be something green in every meal, so a handful of leaves chucked into a risotto, paella, casserole or omelette rarely offends, and makes sure the family doesn’t just eat the beige stuff. Unless it’s cake. Cake shouldn’t be green. Or blue for that matter. That’s just wrong.

Provided the ground isn’t too soggy for us to tread on, it’s a great time to be dividing late spring- and summer-flowering perennials, either to create new plants for your garden, or to rejuvenate a patch that isn’t flowering so well because it hasn’t been divided for a year or five……Leave the late summer flowerers for now – they are still doing their thing, and the best time to tackle them is in early spring, when our (mostly few) Cornish frosts have passed. 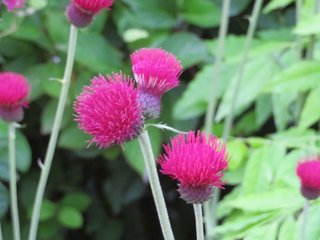 When you are dividing, always be brutal and cut back all the top growth, however ugly it may make your plant appear. It will thank you for it, as it can concentrate on root growth in the warm October soil, and not have to bother with the top end. Give everything a good feed as you replant, and it’ll get off to a flying start next spring.

It is also a really good time to plant or take hardwood cuttings from roses – not only in the weather, but because many retailers are trying to clear their stock for the year, so there are bargains to be had (we can think of one or two places – ahem….).

Taking cuttings couldn’t be easier, but requires a little patience. Cut a healthy looking section of stem between 6 and 12 inches long – cut straight at the bottom, just below a leaf bud, and angled at the top, just above a leaf bud. The angle helps rain drip off, and reminds you which is the top. Plunge the cutting about 6 inches into a well enriched flower bed or pot, firm in well and then walk away until next year – it is unlikely to show much sign of taking before then. And resist the temptation to tug on it to see if it has some roots – that really won’t help! You might want to take several cuttings to increase your risk of success, seeing as it is so easy. 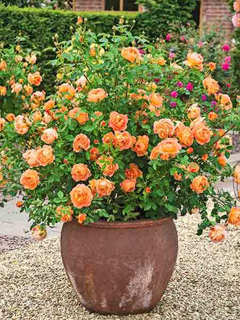 Planting potted roses is equally rewarding at this time of year, particularly if you’ve picked up a bargain – just make sure there is plenty of goodness in the hole (well-rotted as appropriate) and water in well, even though it may be damp outside. Any new plant needs watering in to help the soil settle around its roots, regardless.

Also, it’s coming up to harvest festival time all across the Roseland and further afield, so don’t forget to take 5 minutes and admire the work of your local flower arrangers, whether that be in the schools, churches or village halls, and enjoy the fruits of the year in the broadest sense. We are lucky to live in a country and county with such distinct seasons and long-held traditions, and now is the prime time to celebrate that.