“A good laugh and a long sleep are the best cures in the doctor’s book.” -Irish Proverb 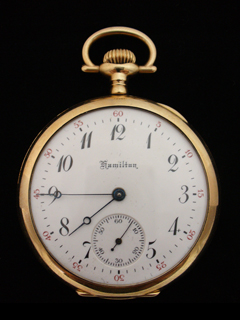 The changing of the clocks – did you feel an effect? Pic1 Last week I had a really bad night’s sleep; usually I sleep for a solid 8 hours. But with only two and a half hours sleep and even that was broken once, by ten o’clock I felt dangerously ineffectual. I was shocked at how limited I was both mentally and in speed of reaction; and can now deeply empathise with anyone who incurs sleeplessness regularly. So I thought it was worth researching more about its effects on the body and some natural ways to get back into a healthy daily rhythm.

Our body works most effectively when our Circadian rhythms follow a 24-hour cycle, responding primarily to light and darkness in our environment. These rhythms researched extensively within the medical profession influence sleep-wake cycles, hormone release, body temperature and other important bodily functions. They have been linked to insomnia as you would expect but also associated with obesity, diabetes, depression and seasonal affective disorder.

It is easy to understand how obesity is linked to those sleeping for six hours or less after my depleted sleep last week. You feel a lack in energy and so go for a sugar boost as you perceive it may help the body to function better. But this isn’t just a psychological thought process there is a change in hormones that trigger this need, more ghrelin (hunger stimulating hormone) a decrease in leptin (energy balance and food intake) and a decrease in insulin sensitivity making insulin less effective in managing blood glucose levels.

Circadian rhythms are determined by our body’s master clock that is located just above the optic nerve. It controls the production of melatonin, a hormone that makes you sleepy. It receives information about incoming light and when there is less light—like at night—the master clock sends a message to the brain to make more melatonin so we get drowsy. 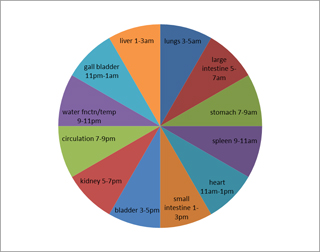 The Chinese have recognised a 24 hour movement of energy within the body since their development of meridians and acupuncture. They divided the 24 hour clock into 2 hour slots when there is a surge of energy to a specific organ as the chart shows but then that same organ’s flow of energy is depleted at the opposite time slot. This reiterates the well-known quote from Adelle Davis (1904 – 1974) who achieved a Master of Science degree in biochemistry ‘Eat breakfast like a king, lunch like a prince, and dinner like a pauper.’

As the Chinese Body clock shows the stomach gets its energy boost between 7-9am in the morning and as Inge Dougans recommends on developing her approach to Reflexology using the Chinese Meridian theory; at the opposite period of day or night the organ should be sedated, or at least not put under stress.

Recommendations by NHS include seven to nine hours a night even when you get older. Although they understand that it becomes more difficult to maintain, NHS reports you actually need the same amount to heal and replenish new cells to prevent degenerative diseases. Many things influence the amount of sleep you get your lifestyle, diet, environment and one piece of research believe it may also be genetic! One article looks into effects of insufficient sleep on circadian rhythm and shows altered gene expression associated with sleep homeostasis, metabolism and oxidative stress that affects the body’s ability to detoxify and repair damage.

A flock of sheep that leisurely pass by
One after one; the sound of rain, and bees
Murmuring; the fall of rivers, winds and seas,
Smooth fields, white sheets of water, and pure sky –
I’ve thought of all by turns, and still I lie
Sleepless…”

So how can we get the required amount of hours? Researchers from Louisiana State University had seven older adults with insomnia drink eight ounces of Montmorency tart cherry juice twice a day for two weeks, followed by two weeks of no juice, and then two more weeks of drinking a placebo beverage. Compared to the placebo, drinking the cherry juice resulted in an average of 84 more minutes of sleep time each night. Not a big study but sounds delicious! 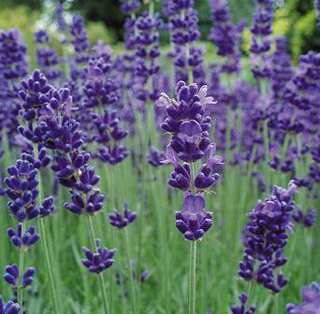 We have spoken about how light effects the secretions of Melatonin, so try if you can to eliminate light from your bedroom when you sleep. Other experts have seen that a reduction in temperature can also stimulate Melatonin which is why having a hot bath before you get into your bedtime routine would then create a reduction in the body’s temperature straight after. Essential oils have different properties with some helping to induce relaxation. Lavender is a favourite for many but if it doesn’t appeal to you, (for one of my students it had the opposite effect and made her buzzy!) then try chamomile or ylang ylang reputedly each one activates the alpha waves in the brain to help induce relaxation.

Alternatively, I have been using an aromatherapy blend that includes Grapefruit essential oil for several years with great effect. Research shows this oil has an effect of circadian rhythms helping those suffering with jet lag and seasonal affective disorder. By using it in the morning it will help to energise you. One client I treated who was a little exhausted after her New Year’s Eve celebration felt extremely refreshed after her massage using this blend, it is also an effective detoxifier. Please let me know if you would like to try it!

It appears that every man’s insomnia is as different from his neighbour’s as are their daytime hopes and aspirations.” -F. Scott Fitzgerald.

Wishing you all good health and happiness,