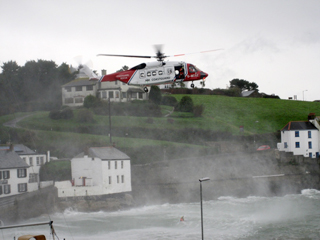 A holidaymaker in Porthmellon has drowned whilst trying to rescue one of his dogs from the sea. He was walking his dogs this morning at around 11:00am.

Devon and Cornwall Police called the incident a “tragic accident”.

The man’s stepdaughter tried to help and the man, who was airlifted from the sea by a coastguard helicopter crew (pictured here by local Gary Mitchell), but to no avail. She was herself rescued from the water by a member of the public.

They added, “The RNLI Lifeboat from Fowey and Mevagissey Coastguard Rescue Team were also in attendance.”

It is unclear what has happened to the dog.

This airlift was the first rescue by the private firm Bristow, who took over the air and sea rescue services from RNAS Culdrose on Friday.