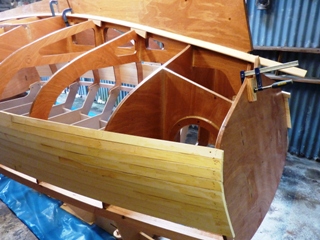 I wouldn’t make a good Queen. In fact I can’t think of anyone less suited to be a Royal. I may be the same age as Kate Middleton and share her hair colour and name, but there are very good reasons why a year later I am spending my days building a boat and not getting ready to celebrate my grandmother-in-law’s sixty years on the throne. For a start, there is the clumsiness. Spilling cups of coffee, tripping up stairs, breaking things. Of a dozen or so wine glasses we had on Planet on our trip one made it home, and of the remaining casualties there are probably only two that can be attributed to rogue waves or bad weather. Then there’s the impatience. Queuing, sitting in traffic, waiting for shops to open. Not my forte. And the total lack of ability to be silent and poised. Or either of those things in fact. 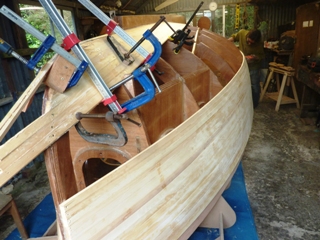 I have to confess to these qualities coming to light in the last few weeks spent planking our boat. Fitting the first few planks was fun and the novelty and excitement of shaping our boat lasted well into the second week. Then we started fitting the more awkward planks and novelty was replaced by a certain amount of frustration as the curves got tighter to fit and the learning curve got steeper. Finally, having got the hang of working with the cedar, we settled into a good routine of planking to find that enjoyable and exciting as it still is, it is also repetitive and at times tediously slow waiting for glue and epoxy to go off and clamps to become moveable.

Somehow throughout all this Simon manages to remain predominantly free of glue or epoxy about his person – with the understandable exception of his hair – while I finish each day entirely covered in adhesive, having narrowly avoided nailing myself to the frames at least three times. As for dignified silence, if anyone’s happened to stroll past the workshop and heard a few choice items of invective drift out of the workshop as a plank has split or not fitted as hoped, they probably came from me. 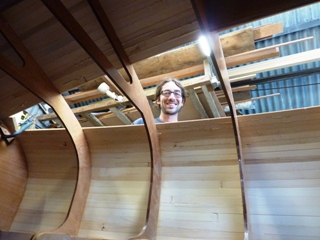 But those things considered, planking is going very well. We’ve been managing to fit an average of about four full planks a day and we’re hoping to finish in time for Jubilee weekend. We started planking nearest the topsides (i.e. the workshop floor as it is now) until we reached a height just below the centre, at which point we began planking from the keel towards the sheer. Having done this on both sides, we’re now working inwards from above and below, herringboning each plank in until they all meet in the middle. The gap is closing and we’re hopeful we should meet our deadline in the next few days! The boat’s gone from looking a bit like a boat to unmistakeably so and it’s getting increasingly easy to imagine us sailing in her, which is incredibly heartening and exciting. With the lovely weather we’ve had in the last week we’ve been itching to be on the water and talking about how much we’re looking forward to being out on our finished boat in a few months’ time. And so while I cannot claim to be overwhelmingly of royalist sympathies or suitability, here’s to the Queen for sixty years of waiting patiently, gracefully and without (all oaths aside) swearing. Enjoy the celebrations!