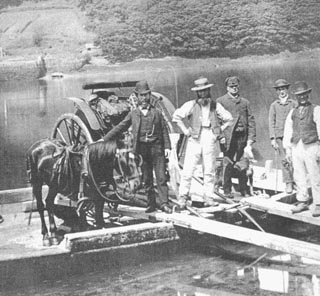 We on the Roseland take the King Harry Ferry for granted these days. It’s a picturesque way to pop into Truro or Falmouth, with many locals crossing each day to go to work. The crossing is certainly an ancient one and was already established when King Henry V1 came this way in the mid 1400s.

A Chapel dedicated to ‘Our Lady and King Henry V1,’ was built on the Roseland side of the river to commemorate their visit to Roseland. Through the years the mode of transport has changed from rowing boat to barge, or platform ferry to chain drive, and has carried everything from poultry to cattle and horses to coaches and wagons and even the troops of Oliver Cromwell and King Charles 1 in the English civil war.

In 1649 John Taylor wrote ‘that day I passed a ferry called King Harry’s Passage, but why it is named few men know. There I lodged at the ferryman’s house.’

For centuries the only way to cross the passage was by a large boat rowed by the ferrymen. Cattle were made to swim the across when being taken to market at Truro. If they were not sold they would find themselves swimming back to the Roseland late in the evening. It was evident for many years that a better form of transport was needed but it was a long time coming. The matter was brought to a head by the then Rector of Gerrans who was heavily involved in organising the local celebrations for Queen Victoria’s Golden Jubilee.

In January 1887 the West Briton reported that, ‘During the last 30 years the question has often been discussed privately and publicly whether there could not be a better means of crossing the River Fal at King Harry Ferry than has hitherto existed – a simple ferry boat, rowed across by one or two men. With strong south-easterly winds the passage is frequently impassable, and travellers who have come eight or ten miles hoping to cross the ferry, have been obliged to retrace their steps and go around by Truro and Tregony- a distance of 20 miles further than they anticipated. A high level bridge has been suggested by some and a steam ferry by others, but up to the present time no change whatever has been made. Mr. C. Davies Gilbert of Trelissick is the ferry owner. The Rev. J. A. Leakey, rector of Gerrans, writes as follows: 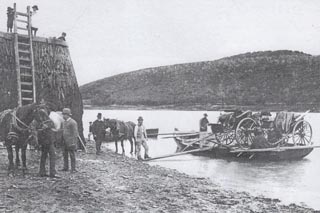 “An enthusiastic meeting, held at Gerrans, decided on a public celebration here of the Royal Jubilee, and formed committees for raising the funds and to collect the women’s offering. Our local proposal is to restore our ancient and beautiful bowling green with ornamental trees etc and to hold a festival on it. But beyond this a strong feeling was expressed, to which, it is hoped, you will give publicity, that the finest Jubilee memorial for this, the Roseland District, would be the giving us a better and speedier route over King Harry Ferry, if not possibly by a bridge, by, at least, a good steam ferry.

“Such a scheme, projected by subscription, would find ready support, and entail the gratitude of the whole neighbourhood for our great landowners. That ancient ferry bears the name of one of England’s famous kings, and records, it is said, his Royal progress through the vale of roses. It is a beautiful and picturesque spot-a lovely sketch in the summer for your itinerant artist, but for those who have often to reach the city of Truro and the western markets it cannot be called ‘a program’ worthy of Victoria’s reign, or these days of rapid life; but it is too often a very slow and shivering reach of objects, as the crow flies painfully near us. Therefore, sir, could the ferry of Harry become the Bridge of Victoria. The year of the Jubilee and the Cathedral opening would be to Roseland one most memorable.”

And so support was gathering for a bridge across King Harry Passage. This would have changed the remoteness of the Roseland with the stroke of a pen had it been agreed.

A month later the paper went on to say, 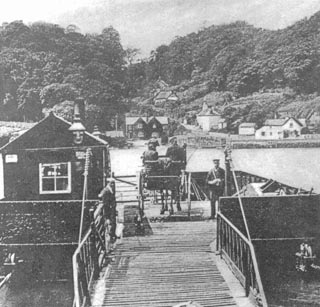 “It will be seen by communications in our page six that a meeting is to be held at Truro shortly to see whether anything can be done towards substituting a better means of communications between the Roseland district and Truro, Falmouth ect., for the present antiquated ferry-boat.

Mr. C. Davies Gilbert is the ferry owner, but does not derive a very large revenue there from. If anything is to be done this season it ought to be done at once, as we understand Mr. Gilbert will leave England for America in the first week in April, and will be absent for several months. No time, therefore, should be lost in asking that the gentlemen meet the persons interested in the matter. It will be remembered that many years ago the late Mr. West of St. Blazey, proposed to erect at the ferry a high level bridge, which he estimated would cost about £2,000, including £500 to be laid out on the approach thereto; but this fell through in consequences of the difficulties with interposed. A steam ferry, however, such as that across the Tamar at Torpoint and Saltash, should be attainable under proper management; a very large expenditure would not be justified by the traffic which at present takes place. There would, no doubt, be a very large increase in traffic if better accommodation were afforded.”

In April a meeting was held in the Town Hall at Truro and now it seems that a steam ferry seemed more probable than the Victoria bridge, ’for the purpose of considering the propriety of establishing a steam ferry at King Harry Passage. ‘Col Tremayne, who presided said when he was first asked to take the chair he had little hope of the scheme being carried out successfully; but since then information had been placed before him by the Rev. J. A. Leakey of Gerrans, which had altered his opinion on the matter. “In the opinion of this meeting the readiest mode of carrying out this object will be, subject to the consent of the owner of the present ferry, to form a company that shall raise the necessary funds in such shares as will extend the interest of the ferry as widely as possible.” A large committee was appointed to carry out the resolution.’

And so the idea of a bridge spanning the river was abandoned, and in due course a steam ferry arrived, which must have been a great improvement on the old rowing boat. It was in fact another 2 years at the end of 1889 before the service is recorded. The new steam ferry ran every quarter of an hour at a charge of 1s 6d (71\2 p). It was reported that, “a great advantage is that passengers and conveyances can be taken over at anytime of tide and in any weather, the former ordinary horse-boat being unable to cross the river when a strong breeze was blowing from the south.”

Although we now have a modern and very efficient chain ferry, which takes us across in a matter of minutes, one thing has not changed since King Henry V1 came this way, the breathtaking views of King Harry’s Passage.