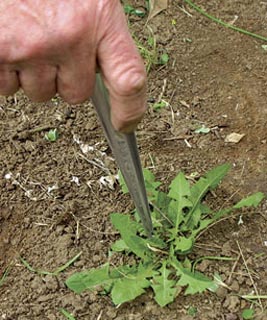 If we do not have more rain soon and in proper but gentle quantity for days on end then our gardens are going to suffer badly. No doubt we will get a deluge at some stage but as I write there is little if anything on the horizon. This of course is where the well mulched gardens and veg plots fair well. The mulch stores water for lengthy periods and my vegetables are managing ok as there is plenty of water still below the mulch. Although the top of the soil looks dry there is plenty of moisture down below.

I am afraid therefore that one of the best ways to conserve what little water there we have is to weed. Every weed in your garden is taking up water and depriving the plants around it. If you have stored water in butts and still have plenty then it’s a good source for more mature plants but be careful not to use it on young plants and use sparingly in the greenhouse as it is often fairly stagnant and harbours all sorts of disease.

Any hand watering is best done in the evening so that the water goes to the roots, doesn’t evaporate instantly and actually does some good. Watering in hot sunshine is a waste of time. Thoroughly soak the plants as a light sprinkling will do more harm than good. Roots look for the water and if it is only on the surface the roots will come up and dry out or burn. If you can water and then put a layer of newspaper over the top weighted with soil you will retain much more moisture. 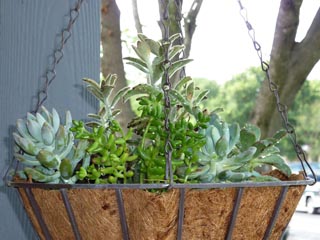 If you have to go on holiday during the summer months it’s the age old problem of who does the watering again. Those who plan their holidays carefully either don’t have pots and hanging baskets or they fill them with succulents. If you have house plants to worry about, put them in the bath on top of a towel or blanket and put one end of the towel in a bucket of water. Your plants will have enough to last a fortnight as long as the sun is excluded.

This year I have had one of the best displays yet of oriental poppies. They are big blowsy girls and I prefer the brilliant red although the errant pink ones have been pretty too. They and several other early perennials start to look tatty as they go over and the foliage that was so bright in spring flops and looks tired. Don’t be afraid to cut them right down. The new leaves will emerge fresh and green and you may even be treated to a second flush of flowers, particularly as the first flowers were a good two weeks early this year. Cut the foliage right to the base. If you have been quick enough to catch some seed and its ripe then sow it now for more plants next year. Further, if you have the inclination to think about next year, now is the time to plant polyanthus seed and pansy seed for next year. 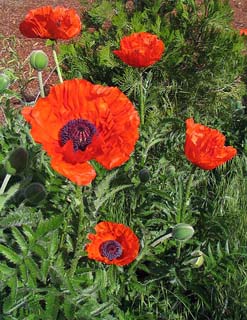 Many of the spring flowering shrubs are over so remember to prune now, taking out about a third of the plant and not cutting into too much of the new wood which will bear next year’s flowers. However, strong shrubs such as weigela can get out of hand and if you prune it hard you may sacrifice some of next year’s flowers but have a better looking and tidier plant long term. There are always exceptions to rules and great care should be taken pruning any of the broom family which will not regenerate from old wood. Just trim the new wood lightly and don’t expect the brooms to last forever. They are short lived and rarely look good after 5 years when they need to be replaced.

You may recall that a couple of years ago I planted a new herbaceous border. I was told by a friend that I would regret the work involved, but I have to say it was one of the best moves I have made in this garden. Yes there is a lot of work in the autumn, cutting down and tidying up but that’s good exercise and I rather like seeing the border emerge in spring and being rid of it all for winter. As long as I keep on top of the weeds in early spring very few more appear as all the plants come up and smother them. 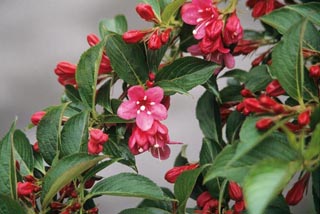 I had quite sensible colour plan but I have lost a lot of that as I continue to cram in new plants that I acquire. The border has therefore ended up as a mass of riotous colour and I love it. Each year the plants double up or more and this autumn I will not only be hacking back and tidying up but splitting many of the plants that are now three times their original size. There are salvias, phytostegia, phlox, veronicas, monarda, poppies, helenium, aquilegia, lupins, geum and campanulas and this year I have planted the small sun flowers, cosmos and amaranthus. They are annuals but just add to the mix and despite the last harsh winter the cosmos seed dropped in the ground last summer has germinated. The front of the border is bounded by perennial geraniums in white and various shades of blue that last for ages and again give a second flush of flowers if cut down as they fade. 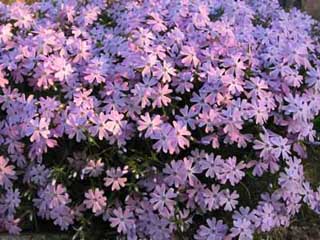 I planted all the seed from a packet of sunflowers. The packet said there were 75 seeds but actually there were 95 and only two failed to germinate, so I have 93 sunflowers planted and those that haven’t gone in the herbaceous border are planted round the edge of the veg patch to attract the bees. Any type of sunflower is a marvellous addition to the summer garden and they are one of the longest lasting flowers when cut for a vase, needing no other additions as they speak plainly for themselves.

Other jobs that you might consider this month include:
Continue to train in climbing roses
Guard against carrot fly that attacks parsley, parsnips and celery too. Plant with onions or chives or cover with fleece particularly afte 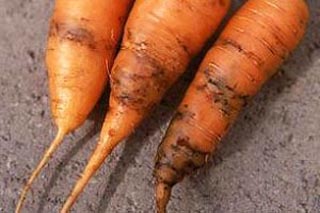 r thinning which creates the smell which attracts the fly.
Plant cauliflowers in rich soil, they are the greediest of veg.
Train soft fruit if against a wall
Water camellias and magnolias, they are making flowers now for next year
Remove side shoots from tomatoes and cucumbers and water regularly at the same time every day.
Check dahlias for earwigs, slugs and snails
I am tempted to say find time to get the deck chair out but I hope your umbrella is more use than a garden chair!