Jutta was born between Düsseldorf, which she describes as “a town nobody outside Germany knows” and Cologne, “a town people from Düsseldorf hate – not only because it’s more famous”.

She has been working as a full-time writer since 2006 and ‘Morgue Drawer Four’ is her first book to be translated into English, so I asked her if she thought there are any major differences between readers/writers in different countries. “Yes, I do. There is a certain kind of humour which in Germany we call ‘British humour’: it is black … just like my books are. In France, for example, the humour is different. I don’t think that my books would work there.”

She tells me that her “target audience is anyone who likes laughing. Everyone who likes a good detective story. People of all ages, of all nationalities…simply: everyone! Making people laugh has always been important to me.”

Jutta describes herself as a “very quick writer with an enormous amount of discipline. After drawing up a rough outline, it takes about 6-8 months to write a book. I write at home, usually at my desk. I could carry around my laptop, but I almost never do. I don’t listen to music or have any strange rituals before or while writing – I just sit down and work. That doesn’t sound very spectacular – and it isn’t.”

I asked if she needed a trigger to start writing. “Yes. I can’t just sit around, search my mind and invent a story. Or even if I could, it would not be as good as the ideas that pop into my mind without me trying to force them. When I feel that a book is ready, I show it to my husband. I ask him to comment and he does. It’s sometimes hard to listen, but we’ve been married for 21 years now, so I guess it works.”

“I found the idea for my “morgue drawer” series while visiting the morgue in Cologne. A coroner showed a group of writers around and told us about his daily work. I suddenly thought: what if one of the bodies isn’t as dead as it’s supposed to be? That was the germ of an idea – a soul (or ghost or whatever you call it) hanging out in the morgue and talking to the coroner. I immediately decided that the soul would be someone with an enormous ego and little brain.”

I asked if Jutta had any advice/insights for people who want to write. “Write! But make sure you still have a job you can live on. To become a professional writer who can live on writing depends on a lot of different factors, not least good luck. I never thought about being a writer until I became one by chance! I always wanted to go into international business and that’s what I did. After living in the Cognac area of France, I returned to Germany where I served an apprenticeship as an export manager with a leading steel and machining technology company. By 1996 I needed a change so I set up my own business as a freelance translator and teacher for Business English and French and worked for companies like Xerox and ThyssenKrupp steel. Whilst running that business, an idea entered my mind. The idea of a detective story. So I decided to write it. It was a surprising success, so I went on writing. It took five more years (and five more books) until I gave up my business and became a professional full-time writer.”

So what is she planning next? “I’m writing a new novel and I’ve just sent a treatment for the fifth book of the morgue drawer series to the editor.” 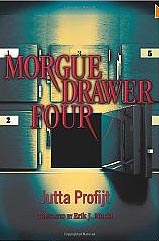 Although Jutta has never been to Cornwall, she loves walking and has walked about 3000 km on long distance footpaths in Germany, Belgium, Luxembourg, France, Italy, Spain and Britain. She says “there is a long distance footpath in Cornwall on my list, so maybe I’ll come and walk in on you one day.” I have already warned her we will have a packed programme for her when she arrives – another interview for Roseland online, a session during the Roseland festival… I am sure we can keep her occupied, even without the joys of the South West coastal path.

Finally I asked Jutta what reading means to her. “It means: travelling the world without paying for a ticket. Living in the past and being back in civilization for dinner. It means: suffering and crying with people who have terrible experiences and being comforted by the ones I love. It means: feeling close to people in countries I have never been to and will never meet. It means: looking at life from a totally different angle, getting in touch although there are many miles between us. It means: exploring life in all its aspects. It is the largest return-on-investment you can possibly have. Buy a book printed on paper or on screen and get the whole real world plus some fantastic ones in addition. Go ahead and start the adventure: READ!”