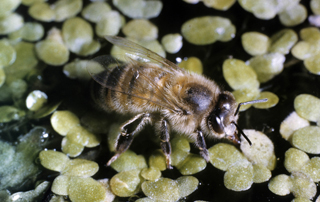 The temperatures over the last week have become a little warmer than earlier and the bees have been taking full advantage of this. They are flying out on the less windy days and are bringing in pollen and water to enable them to feed their young brood. The queen has started to lay in earnest after her long winter in tick-over mode, so, with the brood-nest expanding, the bees have got their work cut out trying to keep pace.

It is not made any easier by the fact that the older bees are dying off at a faster rate than they are being replaced by the hatching of new brood, so it is a very stressful time for them with the few(er) older ones having to work so much harder than when there is a full complement of foragers available. If the warm, wind-less weather continues, the brood nest will be growing in size at a faster and faster rate, so that come the end of March/beginning of April matters will have rectified themselves and the majority of bees in the hive will be newly hatched, young ones, capable of sustaining the colony and the stress point will have passed. 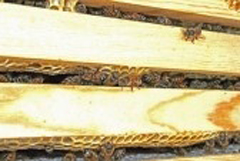 It is a worrying time for us beekeepers as there is nothing we can do to help, other than ensure that, if the hive is low on naturally gathered honey, a feed of fondant or candy is placed within reach of the bees as an emergency feed. Having started this feeding regime in January, I have checked a couple of times since and have had to renew the fondant in one or two hives, owing to the size of the over-wintered colony.

With the others, I will be renewing the feed once the bees have finished what I have given them. However, if the warm(er) weather continues, I might move them on to a liquid feed of sugar and water. If this is made dilute enough, it can fox the bees into thinking that there is a nectar flow taking place, which will induce the queen to lay more eggs. This results in a much stronger colony in the short term than if they had been left to themselves, which in turn will allow the bees to take advantage of a “Spring flow”, which seems to be more frequently occurring these days. With “climate change” or whatever the reason is, this “Spring flow” has almost compensated for the lack of “main flow” in July, when the rain seems to start round about the second week. 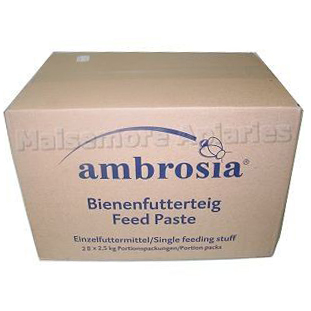 However, if a liquid feed is given too early, whilst the bees are in cluster because of cold weather, it can cause some of them to break away from the cluster to get to the feed, and there is a real danger of them becoming chilled and dying through loss of their body heat. Quite a conundrum for us, so playing safe with fondant or candy is sometimes the best bet.

Apart from cleaning and sterilising equipment ready for use in the coming season, another activity which occupies me and other beekeepers is the Annual Honey Show. We Roseland Beekeepers had our show last week ahead of the AGM but there were not as many entries as usual, for some reason. The original idea behind Honey Shows was from the Victorian era, when beekeepers had the opportunity of parading their wares and having them judged by independent, qualified honey judges.

It is no different today. Honey falls into one of four categories – light, medium, dark (in terms of colour) and set (or granulated). Our group also has a “Flavour only” category and it was here that most entries were to be found again this year, as honey judging not only assesses the honey but also the jar and lid in which it is presented! If you don’t come up to scratch with either of these, then your entry is rejected – even before the honey has been tasted! That is why those who were exhibiting for the first time played safe until they had a feel for what was expected. As usual, the novices were up against an old lag (yes, me!) but the novices prevailed! I didn’t get a single first prize!!

However, two second prizes and one third prize were no disgrace. Whilst obviously feeling proud of the fact that my honey wins prizes, I have to admit it has absolutely nothing to do with me! It is the bees who make the honey and the taste or quality of such is dependent upon the forage to which the bees have access. We are lucky here in Cornwall that we have such an abundance of plants and trees and a generally warmer clime than elsewhere, which makes our honey so special.

Whilst last year was not one of my better years as far as honey gathering was concerned (though I still extracted something under three hundred pounds weight of honey by the end of the season). As for next year’s Honey Show, I obviously must try harder!