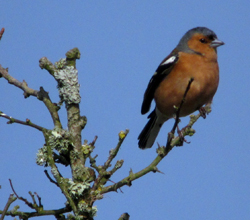 Spring has definitely arrived at last. Despite the cold snap early in the month of February, which put a temporary stop to some of the territorial singing that had started among some of the smaller passerine birds, the breeding season was certainly back on track once temperatures rose again. On that rare date, February 29th, possibly the warmest day of the month in the Roseland, all the senses were in no doubt about Spring’s arrival.

Birdsong has been intensifying everywhere in bushes and treetops. In gardens and surrounding farmland you cannot miss the intense, cascading voluntary of the chaffinch (Fringilla coelebs), the twitter and siren zheeeeeeee! of the greenfinch (Carduelis chloris); then the tinkling crystal cadences of the Dunnock (Prunella modularis) close by is immediately proceded by a symphony of Robin, Thrush and Blackbird and the other songs of other familiar species. The birdsong chorus hails the milder, lengthening days and the re-emergence of resources necessary to drive the regeneration of the species.

In a recent article last year for the feature “Life through a Lens”, I discussed the importance of birdsong, its many competetive functions, the energy required to keep producing it and the significance that singing gives to the presence of valuable resources in the immediate ecosystem. At this time of year, although insect and other invertebrate prey are emerging, food resources for adult birds are poorly available. Nearly all the farm fields required for production have been ploughed ready for drilling or are already sewn with emergent winter crops. Hedgerows too are being flailed early before nest building gets underway but this removes some of the bursting tender leaf buds enjoyed by several bird species. It is therefore important to keep putting out food for wild birds in the garden, particularly energy-rich types such as fats enhanced with additional nutritional material. There is now a wide body of scientific evidence that female birds are able to pass on important nutritional benefits to their developing young, that were gained before the eggs were even laid. 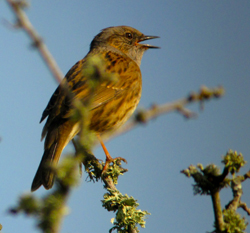 Whilst out surveying for the cirl buntings at Comerrans, I disturbed a brown hare (Lepus europaeus) lying up in its form. Regrettably I do not have a photo for you but I hope to go back to the location and attempt to get one. Brown hares are nocturnal and feed at night time. As they spend the daytime resting very still, it is possible to walk by them very closely and not notice them unless one’s proximity becomes too much of a threat, wherupon they run fast in a straight line away from the threat. The breeding season of hares is between February and September, although spring is the most likely time for viewing females boxing away the amorous males.

In 2010, Natural England estimated that there were about half a million brown hares in England. The brown hare is a Biodiversity Action Plan (BAP) species for Cornwall, because its numbers have declined considerably here, owing to increased intensive of farming subsequent negative impact that this has had on ecosystem biodiversity and balance. On the other hand the brown hare is very under-recorded, as also is the hedgehog. Both species can be difficult to survey for, so if you are to see them then please record your sighting at the Wildlife Trust’s Environmental Records Centre for Cornwall and the Isles of Scilly (ERCCIS). 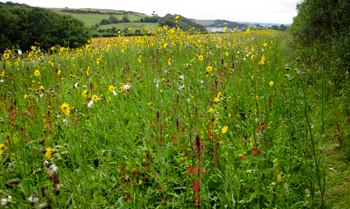 Our farmers are valuable guardians of much of the landscape. Conservation measures put in place for flagship farmland bird species such as cirl buntings and skylarks will also benefit other species such as the brown hare. By taking part in government-funded conservation schemes such as Environmental Stewardship, farmers benefit from encouragement and financial assistance in setting some of their land aside for wildlife, or by farming it in ways that can improve biodiversity whilst remaining productive. In the long term, improving biodiversity will support enrichment of all species, and benefit us too.

Here are some things you can do to help nature in the Roseland in March:

Consider planting or restocking areas of the garden with plants attractive to pollinating insects. Of particular use are those plants with many inflorescences per head or stalk, which reduces the energy required by an animal to travel to available nectar sources. A classic shrub example in this respect is Buddleija Davidii; similarly Pyracantha, which produces colourful berries highly attractive to birds; umbeliferous plants such as cow-parsley (Anthriscus sylvestris), daisies, such as the oxeye, and spike-headed plants such as foxglove and penstemmon are all good for long flowering displays as well as providing insect food. Bees are particularly fond of herbaceous plants such as thyme, rosmary, sage and their various horticultural cultivars). 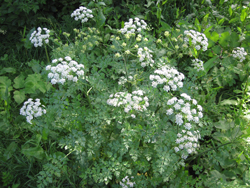 Clean bird feeders regularly and help prevent diseases such as trichomoniasis spreading, and which had a significant impact on the greenfinch population. Washing easily cleanable feeders in very hot, soapy water is effective at removing disease pathogens, whilst making them safe for birds to feed from afterwards.
Have you got all of your nest boxes up yet? It’s still not too late for some species – smaller passerines such as tits are still in the process of establishing breeding territories – and many species will produce two or more broods in a season, but often they need a fresh site each time. Sparrows live in highly social communities, so groups of boxes together and multi-chambered boxes will benefit them.

BTO Nest Box Challenge:
To get the most out of putting up your nest boxes, take part in Nest Box Challenge and help them to monitor the breeding success of birds in Britain’s green spaces. To take part, simply register your nest box online and then submit regular updates on whether it is used, what birds are using it and the progress of any nests. http://www.bto.org/volunteer-surveys/nbc