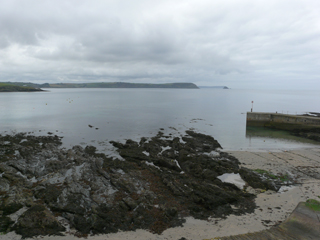 Having lived on the Roseland for four years, I have become familiar with the shifting pattern of occurrence that is to be seen in its varied birdlife throughout the year. This seasonal variation is what makes watching birds so interesting; providing ornithological punctuation to the calendar, whether it is the first glimpse of a swallow in March, that heralds the beginning of spring, or the plaintive call of a redwing passing overhead and unseen on a chilly October night, signalling the onset of winter.

Of all seasons to watch birds on the peninsula, winter is my favourite, as this is the time when the Roseland receives its greatest variety. For each of these winter months over one hundred species can be seen on the Roseland. Indeed, if you put your mind to it, it would be possible, with the right weather conditions and some insightful knowledge (as well as a bit of luck!) to see this number in a single day.

The reason for this avian abundance is due to the immigration of a whole host of different species of waders, wildfowl and seabirds – all species that have their breeding grounds located much further to the north and east and for which the south-western tip of Britain provides all their wintering requirements. 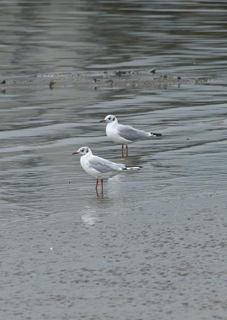 For one family of birds the bays and inlets of the Roseland prove to be particularly important wintering locations. A primitive group, they have become perfectly adapted to their virtually exclusive, aquatic lifestyles. They are the divers (or loons if you are reading this from the other side of the Atlantic). All five members are characterised by their sleek, cormorant-like outlines, dagger-like beaks and generally monochrome plumages.

In winter they dress down – dark above and white below is uniform across the tribe and so require care and reasonable views to correctly identify each one. However, what they lack in colour, they more than make up for in other ways. This is most notably shown when they are adorned in summer garb – a time when their identities are unlikely to be in doubt. Plumages comprised of intricate pattern and fine detail – as though painstakingly etched by the most skilled of artists – combine to create a bird of exquisite beauty. Their various wailing cries emitted on their breeding grounds, are similarly distinctive and highly evocative of their vast, remote landscapes that they inhabit at that time of year.

Found solely in the northern hemisphere, they are birds of high latitudes; their breeding range extending without interval across the Arctic wilderness of Canada, Alaska, Russia and northern Europe. Once breeding is complete they move from freshwater to the open sea, to embark on a southward movement that can take European birds as far south as the Mediterranean. 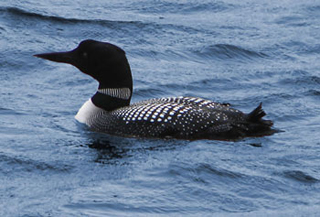 With legs set at the far end of their long body, these birds are the least equipped for a life on land. Indeed, it is only when they nest that they are forced to venture, rather clumsily, out of water to occupy a shallow scrape at the side of a lake, which serves as a nest for their clutch of typically two eggs. Even then their time out of water is kept to a minimum. Once eggs hatch, the parent bird wastes little time in abandoning land in preference for the relative security of their preferred watery habitat.

The downy chicks can swim from a day old, with some preferring to seek refuge upon their parents’ back given half a chance. Returned to water they are transformed in to highly-efficient hunters of their chief prey – fish. Their long evolutionary history has equipped them well for this task. Their bones are particularly dense which help them to remain submerged. Unlike some other species of seabird, like auks and shearwaters, that use their wings to ‘fly’ under water, divers rely on propulsion from their legs and feet, using their wings only rarely to help with rapid twists and turns.

To reduce resistance their strong legs have evolved to be thin and flat like a lollypop stick, and their webbed feet, from serving as broad paddles on the down stroke, fold up to little more than the width of a single toe on the return stroke. Coupled with their slender, streamlined necks and bodies and an amazing ability to withstand pressures to depths of up to 60 metres for the largest members of the group, enables these birds to pursue a varied range of prey items. 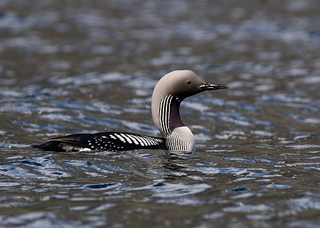 The two species most regularly found along the coast of the Roseland are the great northern and the black-throated diver. Although the red-throated is by far the most numerous British-breeding diver, it is only rarely encountered from the peninsula. With just five records in Cornwall, the white-billed diver is a real rarity. It is the largest of the group and breeds around the edge of the Arctic Ocean.

It is only within the last few years that the fifth member – the Pacific diver – has been formally recognised as a full species. Up until this time it had been regarded as the western race of the black-throated. So similar is it to this diver, that safe identification is only possible at relatively close range – a constraint that no doubt undermines its true status in this country. Following the first record in the UK in 2007, it has gone on to be identified on several more occasions, including a series of records from west Cornwall over successive winters, that may involve the same returning bird. Its occurrence in 2009 established Mount’s Bay and the RSPB reserve at Hayle Estuary as the only locations in the UK where all five of this family have been recorded!

The larger of the regular two, the great northern, is a familiar winter visitor to coastal waters around much of the UK, with approximately 2500 estimated to visit. Breeding no closer than Iceland, the first ones typically appear in Gerrans Bay in October. In good years several dozen can accumulate in the bay and a visit to Pendower or Portscatho will more often than not reveal them. Occasionally, the odd one will fish just offshore, where crabs appear to be the favoured prey.

A scan with binoculars or, better still, a telescope will detect more distant individuals or small groups. Sharing the same general shape and pattern as the black-throated, close observation allows it to be identified by its larger, heavier-looking form, less-rounded head (with often a more pronounced bump on the forehead) and, perhaps most useful of all, the pattern and tone of the division between its white throat and dark side of the neck. For great northern this divide is more diffusely defined and indented compared to a far more contrastingly clear-cut straight divide, from white throat to virtually black side of the neck for black-throated. Peak numbers in the bay are usually recorded in January and by April most will have gone north, leaving non-breeders that can remain as late as May, or even, exceptionally, in to early June. By this time they have been transformed by their spring moult in to their stunning, summer finery.

With a UK wintering population of around 560 individuals, the black-throated is far less numerous than the great northern at this time of year. However, up to a quarter of this total can be found along the Cornish coast between the Helford and St Austell. (It is partly for this reason that this stretch of coastline has been identified as internationally important as an Important Bird Area by the RSPB in the 1990s).

Unlike the great northern, it breeds in the UK, with over 200 pairs in mainland Scotland and the Hebrides. Compared to its bigger, bulkier cousin, the black-throated has more contrastingly dark and light plumage, with a prominent tell-tale white patch visible above the water line, along its rear flank. Another good clue to help identify it can be gleaned from its differing behaviour when it arrives for winter down here on the Roseland. Though more usually encountered singularly or in pairs elsewhere, it is often seen in rafting parties in Gerrans Bay, which can number thirty or more individuals that will all dive as one when on the hunt for fish. Like the great northern it too will remain till spring, though the last records are usually no later than late April.

So, whenever you are out and about walking the coast path on the east side of the peninsula in winter, remember to stop and look out to sea for a few minutes every so often, as that bird that at first glance you took to be a cormorant or shag, may in fact be another type of fish eater, whose origins are much further north.