So much to tell you this month! There’s been glueing, planing and sanding and more epoxy than you can shake a stick at…which is exactly what you do with epoxy, but more of that later. So much epoxy in fact that as we were sitting down to watch some erudite programme or other last week, Simon turned to me as one character shouted to another across Albert Square and said “Did he say ‘Epoxy’?!’ As connoisseurs of the finer things in life will know, the name was ‘Roxy.’

The first job was to coat the frame ends and joints with an initial layer of epoxy, before bonding the joints together with a fillet of thickened epoxy blend. Once the epoxy on the joints had cured, we applied two complete coats over the entire framework of the boat. Epoxy is a thermosetting resin that is used as both a coating and adhesive to a variety of ends. In boatbuilding, it has the effect of both strengthening the surface it is applied to and making it moisture resistant. Therefore, by epoxy coating the plywood frames of our boat, and subsequently

the entire hull, we will be making her more durable and waterproof. Furthermore, building our boat in this way will avoid many of the typical issues of upkeep presented by traditional wooden boats. She will not need to ‘take up’ (absorb water so that the timber expands and closes gaps between planks) after an extended period on dry land to avoid leaks, which will also serve to make her significantly lighter than a traditionally planked boat of a similar size. It makes sense to us to make our boat as low maintenance and light as possible, plus a heavier boat is far harder to manoeuvre without an engine!

In between coats of epoxy, we’ve been taking time to enjoy the Easter break and to get on with other jobs needing to be done before starting planking. Fitting the sheer clamps was one of these. The sheer clamps are strips of Douglas Fir that run along the length of the boat, forming a structural junction between the top of the frames and the deck. So far, most of the jobs on the build have been straightforward. Some have required more thought, skill or experience than others, but most have been relatively simple to accomplish with a bit of patience and concentration. This is great; Si’s plan for the design has always been exactly this, and so far we are really pleased that our boat could be built by anyone with a reasonable amount of common sense and determination. Fitting the sheer clamps was the first task we have taken on where we felt we were stepping into the world of more skilled boatbuilding, and one we could not have completed so happily without the invaluable help and guidance of Bob Edwards, who has more experience of carpentry and boatbuilding than anyone we know and who very kindly took the time to show us the best way to go about bending and fitting the timber to the stem and frames. We’re very lucky and grateful to have him so close by. We’re also very lucky to have had such a lot of support from other friends in the village and nearby. The Easter holidays saw lots of very welcome visitors to our workshop, offering materials, tools and helping hands or just the opportunity to stop what we were doing and drink coffee in good company. They say it takes a village to raise a child, but the same could be (very happily) said of our boat. Thank you all very much!

So we’ve been compiling a list of a few modifications to the sheer clamp design to facilitate construction and fitting and to a few other design details we’ve come across so far, so that Simon can address these in his design for any future boats. Overall though it’s going really well and we’re pleased, and it seems to me that incidental frustrations or difficulties are all part of building a boat or making anything for the first time. And I’d far rather tackle this process again than put together the average Ikea wardrobe. 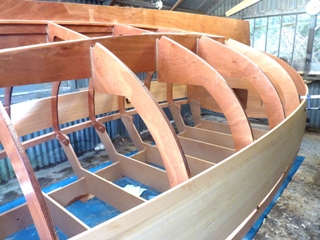 And lastly to planking. Most conversations we’ve had with people in the past few weeks have started – quite understandably – with ‘How’s the boat? Have you started planking yet?!’ To which, having found a multitude of jobs to be done before the first plank could be fitted, the answer has been ‘No’, quite possibly accompanied by a large sigh. To anyone who has been on the receiving end of this, I apologise. But after a productive few days this week, the answer now is a resounding, beaming ‘Yes’. So if you’d all like to ask us again….