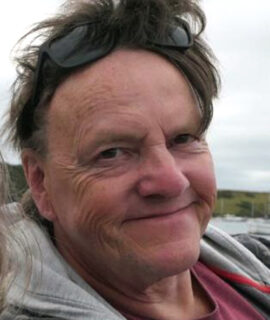 An engineer by profession, Phil Keymer has spent most of his career in local government transport management and consultancy.  He’s enjoyed a parallel occupation in IT systems engineering and support.

He and his wife Jenny live in the Churchtown Road house her mother, Peggy Pascoe, was born in.  Initially from Wales and spending the greater part of his working life in the Big Smoke, he’s been living on the Roseland in Gerrans for the past 18 years, initially commuting whilst Jenny looked after her father Ian Maxwell from 2004, and then permanently for the last twelve years.  Jenny’s ancestors can be traced back to the Sawles and Pascoes in the 1500s, but would go back to the earliest settlements of Gerrans and Portscatho.

Jenny and Phil have supported the local organisations, particularly St Gerrans Church, the Heritage Centre, and Gerrans and Porthscatho Old Cornwall Society, as well as the other local events.  Phil supports local websites, and provides help and assistance for many of the computers of the village residents.

He is looking forward to working with all those volunteers who help make Roseland Online a great community website, and carrying forward the remarkable achievement that Mark had in its creation.