As well as caring for habitats and wildlife across the Roseland we are also responsible for looking after a lot of historical places such as Nare Head nuclear bunker, Black Head hill fort and rifle range, Dodman scheduled ancient monument and St Anthony Head battery.

Over the summer months, we are very happy to be back running our St Anthony Head tours again after a break due to Covid-19.

This is a fantastic opportunity to learn about the history of the occupation of the headland during WW1 and WW11. For years after the WW11 the remains were buried under rubble, covered over to try and forget the monstrosities of war. The Trust began to unearth the battery and gun emplacements in 2012 and it is now possible to go inside the battery, see the working shell hoists in action and get a sense of what life would have been like on the front line. 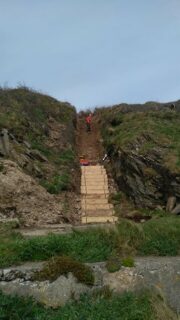 Other points of interest include the battery observation post, search light, paraffin store and old trenches running across the headland.

In recent years our volunteers undertook the monumental task of finding the steps down to a search light position near the lighthouse. There was a lot of initial guess work, clearing scrub and digging down in the hope of finding something that resembled a step! Eventually one was found, and then again, a lot of clearing and digging to find which direction they were heading. It was a fantastic few months of exploration and we eventually found our way down within a short distance of the search light platform. The most disappointing thing was that the last, steep flight of steps, had all but disappeared. Whether they had been intentionally removed post-war or just quickly made so didn’t last, we’ll never know. We spent some gruelling days lugging the generator up and down the slope and putting in new steps to allow access to the platform. It was extremely rewarding and well worth the effort. 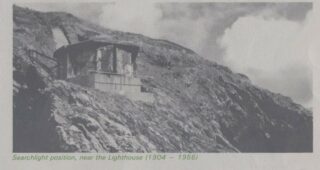 We have plans to unearth the generator room and another flight of steps leading to a mobile heavy artillery unit (MHAU) at Zone Point.