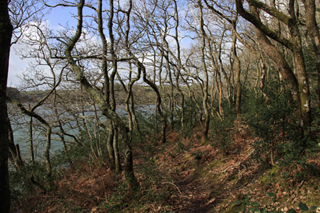 The Roseland peninsula does not cover many square miles, but it is quite possible to live a whole life here without familiarity with it all: cliff paths overlooking inaccessible beaches, the inland network of footpaths and lanes, remote farmsteads and other dwellings hidden among creeks and wooded valleys. So exploring some of the more secretive, unpeopled places is often an experience in discovery.

At Chapel Wood near Tolverne, there is a track that runs through ancient oak woodland, leading towards the Roseland landing of the King Harry Ferry. The underlying geology here restricts the growth of the oaks, which have a skinny and often contorted development. Moreover, there are very few, if any, non-native plant species found here, making it ecologically important. The habitat is ideal for woodland bird species such as Great tit and Blue tit, providing all the resources needed to sustain an adult and breeding population. 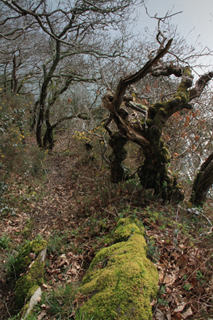 Beneath the oak tree canopy is an understorey of holly and hazel interspersed with honeysuckle, with a woodland floor carpeted in ferns, mosses and liverworts, and plants of the family Ericaceae, indicative of the very acidic, nutrient-poor soil. One of these, Bilberry, can be found growing in several patches.

Bilberry (Vaccinium myrtillus) is a dwarf shrub, closely related to the American Blueberry (Vaccinium corymbosum) in the same genus, which contains some 450 species. Bilberry is also known as blaeberry, whortleberry, whinberry or wimberry. The cherry-red bell-shaped flowers are an important food resource for butterflies and moths. The blue-black edible fruits are much like blueberries and said to be of stronger flavour.

Bilberries have been prized for their medicinal properties for centuries, and modern science has revealed that bilberry extract can indeed deliver health benefits. Bilberries contain anthocyanosides, powerful antioxidants found to be effective in the treatment and prevention of certain degenerative eye conditions. 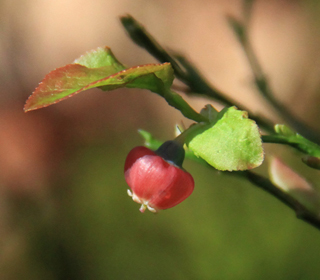 The presence of bilberry and other Ericaceae among the oaks at Chapel Wood is of further significance to science, because of all these species susceptibilty to the fungal plant pathogen Phytophthora kernoviae. Their presence can be used as a biological indicator of the spread or containment of this potentially devastating threat to our local biodiversity. One to watch.

Much of the hazel along the woodland path, and along the road down to Tolverne, has been coppiced. There was a considerable amount of uneaten hazelnuts lying about, along with many empty shells of eaten ones. 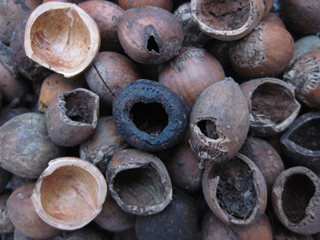 You can get an idea of who ate what by the way the shell was broken into. Many of the nuts had clearly been eaten by either squirrels or Great spotted woodpeckers, that simply crack the shells apart in their strong mandibles. Others had been nibbled by rodents. It is quite possible that this special woodland site may be home to Dormice, and finding their discarded hazelnuts can confirm this.

A wide range of mammals and birds leave behavioural evidence of their presence, through discards and droppings. Here’s a great online guide by Steve Harris of DiscoverWildlife.com, where you can learn about these behaviours, and whose path you may have crossed when out walking in the countryside.

The Cirl bunting reintroduction project is now into its spring/summer reproductive season, with around 10 pairs already recorded on territory. We are hoping for a good reproductive season this year, as last year saw a positive recovery from the 2012 low. However, the project has had its funding cut, which will have a signifcant effect on recording effort. Attempts are being made to find alternative funding for this internationally important work, but none has been sourced by the time of writing. If anyone out there knows of suitable benefactors keen to contribute, please contact the project leader Kath Jeffs at the RSPB South West Regional Office (kath.jeffs@rspb.org.uk).

The RSPB have published the results of the nationwide Big Garden Birdwatch that took place at the end of January 2014, with individual county results available. While many red-listed species appear still to be in decline, House sparrow numbers in Cornwall seem to have steadied, and they remain the number one species seen in Cornish gardens. 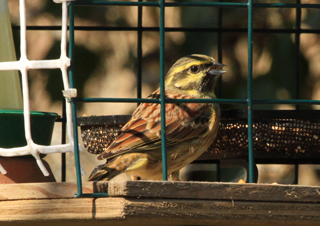 Recent research,  emphasizes the need for good hygiene around garden bird feeding stations, both for the birds and for us humans. There is new epidemiological evidence available that garden birds are a source of Salmonellosis in humans, where good hygiene has not been properly observed. Always wash hands thoroughly after handling bird feeding equipment, even if you wear gloves too. Keep feeding stations clean with bird-friendly disinfectant.

Despite the arrival  of spring, it’s still important to keep putting out food for garden birds, especially as the last of the weedy stubble fields are now being ploughed in for spring crop-sowing.