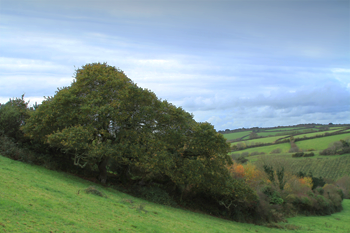 Oak trees like extended seasons, it seems. Among the last of the deciduous species to drop their leaves this autumn, they have been more affected by late warm days than the decreasing day length in the timing of their leaf fall.

Many tree species are long-lived. They have thus evolved to cope with a broad range of climates over centuries. This adaptation has allowed them to spread far and wide geographically as well as altitudinally, making the best of the season, however it progresses, at the most local level. Studies have shown that while some species are sensitive to photoperiod and average temperature, others are not affected by photoperiod at all, and temperature is the main controller of leaf drop, allowing trees to maximise their nutrient synthesis and uptake. Oaks tend to fall into this last group, and thus you may have noticed how Roseland oaks, mainly Quercus robur, have been among the last to go dormant, accompanied by Goat willow (Salix caprea) and Alder (Alnus glutinosa). 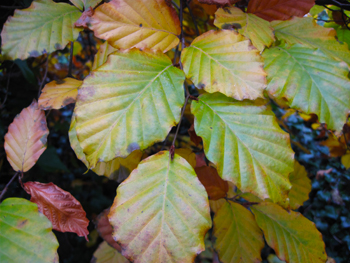 The colourful displays of autumnal woodland have been somewhat late and even lacking this year, due the extended warm season. Autumnal leaf colour changes and the effect of climate are explained in this fascinating sheet downloadable from the Woodland Trust, here.

Trees enter freeze-resistant dormancy to avoid cellular damage, especially to their delicate spring leaf buds. If our winters become increasingly mild, there is a possibility that some tree species may wake too early from dormancy, swelling leaf buds that are then at risk of damage from unpredictable spring frosts. Many animal spring life cycles depend on this bud-burst bounty for early nutrition: the winter moth, for example, whose caterpillars feed on oak leaf buds, which are themselves predated by Blue and Great tits for their nestlings. Recent scientific study has attempted to establish if climate change could lead to an increase in damage to trees in this way, but results are so far inconclusive.

Is Autumn getting later? Let the Woodland Trust know!

A little bit of citizen science can help to provide a lot of data, leading to better scientific understanding of the effects of climate change on nature. This is where you can help! The Woodland Trust run a constant survey to evaluate the effects of climate change, by recording for their Nature’s Calendar project. The public can post records of the signs of the seasons where they live. Simple information, such as when you last cut your lawn before winter (or if you haven’t stopped at all), or noting the emergence of animals in spring or the first fruits of autumn all matter. As they clearly state:

You don’t have to be an expert to take part, and there is lots of help with identifying things for recording.
http://www.naturescalendar.org.uk/survey/

Species to look out for in the Roseland this autumn

The autumn is a time for significant increase in the bird population, as many species arrive here to overwinter from further north, likwe this Meadow pipit (Anthus pratensis). They are attracted to the stubble fields, along with many other species, and where they forage for food among the weeds and crop stalks. The Meadow pipit is a species of conservation concern, as numbers in the UK have declined since the mid-1970s, resulting in this species being amber listed. 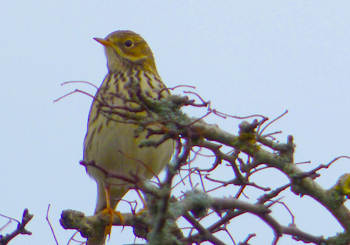 In the hedgerows, listen out carefully for Goldcrest (Regulus regulus) and Firecrest (Regulus ignicapillus) calls. These tiny birds (smaller than wrens) will have migrated from some distance away: Firecrests from Northern UK, while the Goldcrests come across the North Sea from Scandinavia. How they manage such an arduous journey is truly miraculous!

Around the clifftops and even Portscatho Harbour, look out for some of our resident Ravens (Corvus corax). Vocal, and full of character, they love to forage along the beach, among rocks and boulders and even round human objects left lying about. A pair of Ravens are still roosting near Ravens Hole, accompanied occasionally by the two leg-ringed Choughs (Pyrrhocorax pyrrhocorax) that chose to settle here last year.

On the inshore waters, Great northern (Gavia immer), Black throated (Gavia arctica) and Red Throated (Gavia stellata) divers are starting to appear all round the peninsula.

Back in Early November, a pod of Risso’s Dolphins (Grampus griseus) were seen out in the Carrick Roads; here’s hoping they hang around long enough to be seen again. In the meantime, look out for bottlenosed (Tursiops truncatus) and common dolphins (Delphinus delphis) that are arriving here in large numbers, and of course the usual gathering grey seals (Halichoerus grypus) hauled out at Towan and other familiar locations, in increasing numbers as the season progresses.