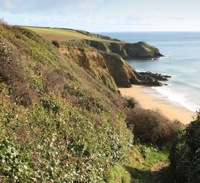 You’ve celebrated Christmas, partied-in the New Year, and consumed practically your own weight in rich food and drink. What better way to shed some excess pounds than by taking a long walk (or several) around the Roseland’s stunning landscapes? Get the wellies on and layer up the outdoor gear, to stay dry, warm and cheerful  out in any weather.

A walk along the coast paths will be a bit muddy, windy and sometimes rainy, but the weather adds drama to the stunning scenery we have here. From Place to St Anthony, St Just to St Mawes, you will have wonderful sea views across the Fal estuary towards Messack and beyond, with iconic stands of Monteray Pines overlooking rocky shorelines, and marine traffic on the move. Take your binoculars and try to spot as many different bird species as you can, both on and off shore. At St Just Creek you are likely to see diving Little grebes (Tachybaptus ruficollis), as well as Grey Heron (Ardea cinerea), Little egret (Egretta garzetta) and the occasional graceful Mute swan (Cygnus olor), to name but a few. 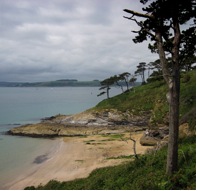 From Portscatho, the path going South takes you down to Greeb Point, where our Choughs have most recently been hanging out, surrounded by other corvid specis. Just beyond, the glorious stretch of almost endless sand and rocky shore  at Towan is irresistable to stroll along; shell treasures left by the receding tide are evidence of the sheer abundance of life in the seas beyond. Moving on to just south of Towan, you will lately have an opportunity to view our grey seals (Halichoerus grypus) hauled out on their own private beach. As many as 20 or more individuals have been seen here at this time of year, and there is now a camera set up by Cornwall Seal Group to monitor them as they come and go. 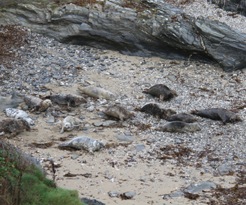 If you go North of Portscatho to Pendower, you will have an opportunity to view some of the winter visitor diving birds out in Gerrans Bay. Great Northern (Gavia immer), Red throated (Gavia stellata) and Black throated (Gavia arctica) divers can be seen along with the usual shags (Phalacrocorax aristotelis) and cormorants (Phalacrocorax carbo). Among the divers you may even be lucky to see the rare Pacific Diver (Gavia pacifica). There are likely also to be several species of duck, among whom may be Teal (Anas crecca), Pintail (Anas acuta) and Red-breasted merganser (Mergus serrator).

Walking out to Nare from the National Trust car park, one can traverse the rugged gorsey top of the headland, to gain a view of Gull Rock with its population of Razorbills (Alca torda) and Guillemots (Uria aalge), as well as various gull species. Eventually your walk may bring you to the sheltered wooded valley – a complete contrast to the headland top – where small woodland bird species hide amongst the scrubby trees and ferns, including Willow warbler (Phylloscopus trochilus) and Goldcrest (Regulus regulus). 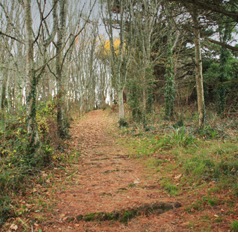 Despite much rugged landscape, the Roseland has many sheltered wooded places where public footpaths cross. Look out for the slot marks in the dirt made by Roe deer, the most commonly seen deer species. And if you see a deer, then there is almost certainly another with it, close by. Muntjac deer have not been officially recorded yet as being in the Roseland but they are very elusive and may already be here too. Animals such as badger leave their own distinctive paw prints on soft ground, as well as tell-tale pathways worn over banks and field edges. Once you learn to notice these signs of animal life you soon realise that they are everywhere!

Something to do this month in the Roseland

It’s the RSPB’s Big Garden Birdwatch (BGBW) time again, coming up at the end of January. This year it has some new features and ways to record your sightings via tablet and smart phone. As well as recording birds, the RSPB would like to hear about certain other species, including: hedgehog, badger, grey and red squirrel, roe and muntjac deer, frog and toad. The more data we can gather about these animals, the better we can plan for conservation measures in the future. So every contribution to the BGBW survey makes a difference. Will you take part this year?

I’ve discovered a great little app that you can download to your smart phone or tablet: It’s called Chirp!, and it has a database of British and European birds for you to look up using the simple interface. You can see images of the birds, accompanied by sounds of their calls and songs to help you identify them. It’s a great way to identify species when you’re out in the field with your mobile device. Chirp! also features quizzes to test your knowledge of bird song and bird ID. There other similar apps available, but I found Chirp! was highly recommended and the cost is minimal.