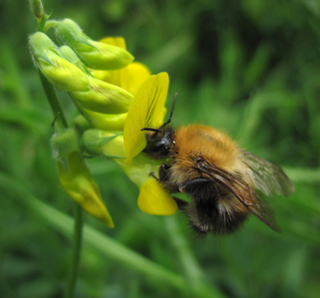 Summer – could it actually be here at long last? Much of our nature would appear to indicate so, with an apparent boost in productivity at many levels in our local ecology, especially plantlife. Dazzling drifts of colour persist in hedgerows and meadows. While earlier spring flora have gone to seed, plenty more have taken their place, stunning stands of Foxgloves (Digitalis purpurea) topping the bill in the last few days of June.

Native to Britain, wild Foxglove is as much admired in our gardens as the horticultural cultivars. Its dust-like seeds spread easily on the wind, ensuring its ubiquitous spread, productivity signified by its popularity with bumblebees. The flowers also provide food for the larvae of two moth species, frosted orange moth (Gortyna flavago) and the foxglove pug moth (Eupithecia pulchellata) 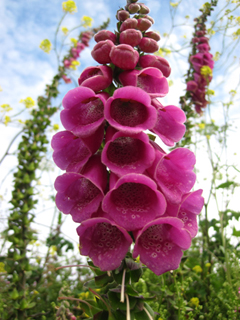 Foxglove has made a fascinating contribution to development of modern medicine. The English physician and botanist, William Withering, isolated digitalis as the active ingredient in folk remedies, establishing appropriate dosages for effective treatment of dropsy (now termed oedema) and related heart conditions. Withering’s account of his work, entitled An Account of the Foxglove and Some of its Medical Uses: with Practical Remarks on Dropsy, and Other Diseases (1785) is considered to have paved the way for modern pharmacology. The modern forms of digitalis, Digitoxin and Digoxin are still widely in use today. Curiously, Digitalis purpurea is also one of several source plants of loliolide, a potent ant-repellent. So whenever you see a magnificent swathe of majestic Foxgloves, you may recall the enormous value of this beautiful plant to humans and other animals.

Foxglove has not been the only plant to attract my attention this month. A number of curious flowering spikes have made their appearance among our coastal hedgerows, benign and rather orchid-like in appearance, but with a hidden, unpleasant secret. I refer to Lesser broomrape (Orobanche minor), member of a genus of parasitic plants that are mainly host-specific. 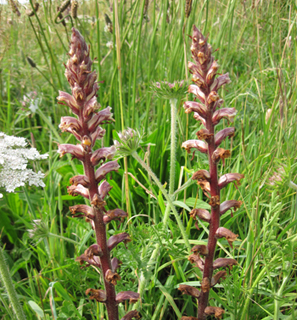 Broomrape cannot photosynthesize, having no chlorophyll in its cell structure, so must use a host plant for its needs. Broomrape seed, produced from flowering stem in June and July, is chemically triggered to germinate when it contacts the roots of its target host, penetrating into the roots and vascular tissue to satisfy its nutrient requirements.

There are nine British native species of Broomrape; some are described as rare. Their scarce occurrence is attributable to their fussiness over habitat and a warm climate – not helpful characteristics in a host-specific parasite.

The Broomrape depicted here is growing close to a wild carrot (Daucus carota subsp.gummifer), which may be its host plant, in which case it may be a Carrot broomrape (Orobanche minor Sm. subsp. maritima). Carrot broomrape is a relatively rare subspecies of Lesser broomrape, typically growing on dry, coastal slopes such as we have in the Roseland. Its rarity is still open to establishment, so little is still known about the genus. You can find out more about this curious plant species here.

After a worryingly slow start to the season, our Cirl buntings are working hard to improve their productivity. So far we have recorded four fledged broods, comprising a minimum of seven new individuals (possibly one or two more), while several adult pairs are feeding chicks in the nest. These numbers are favourable, compared with last year. There are still occurrences of nest failures, probably down to predation rather than bad weather or lack of food, but predation is perfectly natural and normal and pairs waste no time in getting started on new nests and reproductive activity.

Forgive the unashamed plug but this new campaign is way too important to not mention. 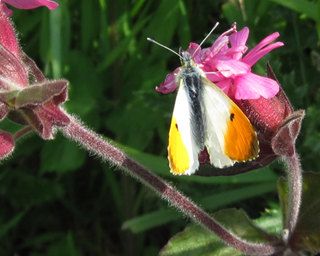 The RSPB has launched a campaign to help tackle the housing crisis facing the UK’s threatened wildlife. Giving Nature a Home will urge the nation to provide a place for wildlife in their own gardens and outside spaces.

The launch of the campaign comes a month after 25 wildlife organisations, including the RSPB, released the groundbreaking State of Nature report revealing 60 per cent of the wildlife species studied have declined over recent decades.

Getting people to act for nature in their own gardens is the first part of a package of actions that the RSPB is launching in response to the State of Nature. Over the course of the next few months, the charity will be outlining what businesses, communities and politicians can do, as well as detailing the RSPB’s own plans for saving nature. 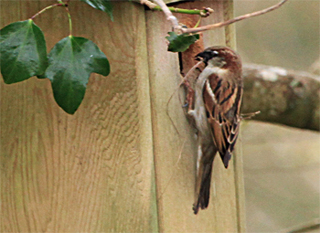 To spread the word and inspire individuals from across the country to build homes for nature in their own gardens and balconies, the RSPB is embarking on its first-ever primetime TV advertising campaign, beginning on 5 July.

Over the coming months many of the RSPB’s reserves will be running events and activities linked to Giving Nature a Home. For more information, visit www.rspb.org.uk/reserves.

The Giving Nature a Home website will give everyone access to expert advice about helping nature in any outside space– whether it’s a huge garden or a small planting tub on balcony – at www.rspb.org.uk/homes

By visiting this website people can get their free Giving Nature a Home starter guide, help populate a map by telling the charity when and where they’ve given nature a home, and share pictures, tips and ideas with others.  You can also find out more about what the RSPB is doing to give nature a home in the wider countryside.