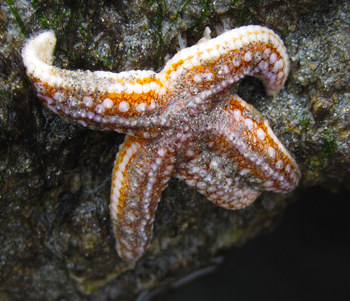 It’s the most wonderful time of the year. Hedgrows and cliff paths exploding with flora and lush green fresh foliage, bejewel our stunning landscape vistas. The door into summer has, apparently, already opened. It’s a great time of year to stroll down to the beach and search along the rocky shoreline at low tide.

Rocks and rock pools are teeming with life. There is much competition for space and resources, whilst trying to avoid becoming a meal for something bigger. One group of predators, the sea anemones, are very familiar to most of us, and appear harmless enough, especially when exposed on rocks out of water. However, like jellyfish, their many tentacles are armed with stinging cells to trap and paralyse prey. 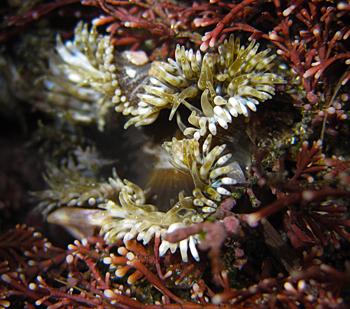 Sea anemones belong to the Coelenterates, primitive animals having a basic sac-like structure, containing a digestive cavity. Once prey has been caught, it is passed down into the digestive cavity. Prey can be anything from small fish, molluscs or crustaceans.

There are several species of sea anemone living along our shores, the most common being the Beadlet anemone (Actinia equina), shown below. It can be seen at low tide on rock faces and in rock pools, usually tucked up in jelly-like blobs, waiting for the tide to return, bringing with it fresh prey. Beadlet anemones exist as red, green or brown colour morphs, but they all possess blue, warty spots at the base of the tentacles. 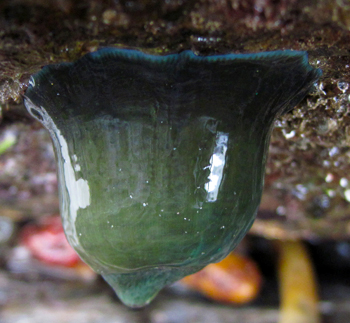 The tentacles and mouthparts are retracted when out of water, to protect the animal from drying out. To all appearances, individual anemones appear permanently attached to their chosen spot, but they can detach and move around, bringing them into contact with other individuals. Beadlets are agressively defensive of their personal space, using their stinging weapons to fend off rivals with whom they come into contact. The damage can be substantial. However, as parents beadlets are curiously mindful, actively brooding young.

Larval anemones released by the parent, exist as plankton for a brief period, before crawling into the cavity of another adult anemone, male or female. Here they develop into fully formed miniatures, at which point they are catapulted out, landing on a suitable surface on which to attach and live the adult life. 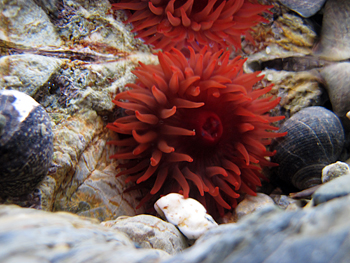 Of course, there are other species of anemone you are likely to see on Roseland shores. The Strawberry anemone (Actinia fragacea), shown below, is so called because its bright red body is covered in a pattern of greenish-yellow dots, but it looks similar to the beadlet at a glance. It was once considered to be the same species as the beadlet; however a scientific study by Carter & Thorpe (1981) established that there were important genetic differences between the two species.

Some anemones are much harder to find than the conspicuous beadlet, as they use camouflage to disguise their presence and deceive prey that may have excellent eyesight. The Dahlia anemone (Urticina feline), our last image, is one such. If you can see its body at all, it will be pink with blueish, sticky warts. However, this anemone is often covered with sand, broken bits of shell and coral, and other materials from the loose substrate on which it tends to attach itself, as shown here. 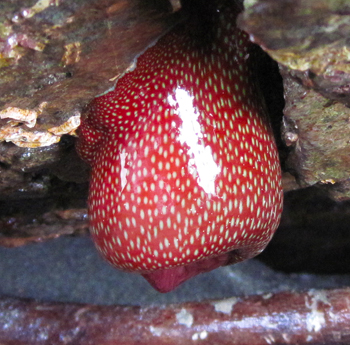 In the last few days, large swarms of Barrel jellyfish have been seen around Cornish shores, especially in the proposed marine protected area around Falmouth, which includes the Roseland. They are the largest jellies to visit inshore waters, having a head nearly a metre wide and tentacles almost two metres in length. However, these are not thought to be harmful to humans if in accidental contact with them. Even more importantly, the barrel jellyfish is prey to the leatherback turtle, so divers are hoping to catch a glimpse of this much rarer visitor too.

The Cirl buntings have, like other bird species, got off to a promising start this year. By the end of April we had almost matched the total number of breeding pairs recorded for the whole of 2013 (28), so we are feeling very confident of exceeding 30 pairs this breeding season. In the meanwhile, established pairs are hard at work nesting, incubating and feeding chicks. Although, as expected, one or two early nests have failed, we have already recorded the first fledging success, by a pair comprising one of our oldest known females at four years of age. Once these parents have sent their young on their way, they will have at least one more go. 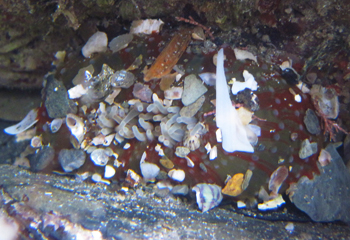