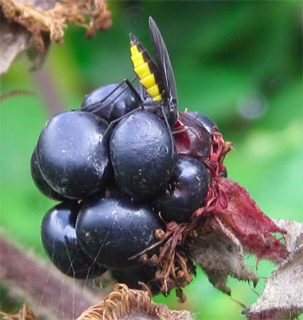 Now is the time for celebrating the bounty of nature. Humans eagerly gather in a harvesst bounty of ripe fruits and grains. Edible fungi are popping up in grassy fields bordered by bushes laden with blackberries and sloes, ripe for culinary and alcoholic uses. Other animals too are thinking of harvesting and consuming as much as they can, driven by the increasing shortness of days with cooler weather, trying to mitigate the challenge to survive forthcoming seasonal famine. And what a rush there has been to capitalize on some of the more sunny days we have had recently! If you can’t quite believe they occurred, then recall the sudden appearance of large numbers of insects in the last month, including butterflies, hoverflies and many other kinds of flying insect great and small. They have emerged because plantlife at the bottom of the energy supply chain has been hard at work producing new growth and resources, which can immediately be shared up through the complex foodwebs. You can experience this festival of late abundance simply by standing in front of a large clump of mature, flowering ivy (Hedera helix) in late season sunshine. Listen! The whole bush seems to be humming with insect life, gathering the rich nectar. 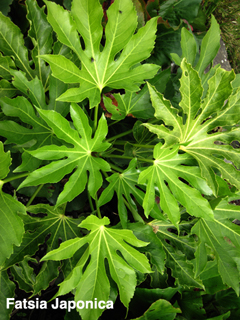 Ivy is a highly abundant woody climber that can be found throughout the British Isles, so is therefore by no means special to the Roseland but its presence here is valuable, nonetheless. Ivy is the only member of the Araliaceae family native to Britain, having many relatives in other parts of the world, mainly in the tropics. A good example of one of ivy’s closest non-native relatives is Fatsia japonica a large, almost tropical-looking shrub commonly grown in British gardens.

Ivy is well known as a persistent rambler and climber, scaing trees to great heights, covering walls and ground in the understorey, using specially adapted suckers on stumpy rootlets along its stems. We are very familar here with ivy growing on our Cornish hedges, where it weaves itself into blanketing cover amongst the other plantlife present. People like to remove ivy from Cornish hedges around their gardens in order to reveal the attractive old Jack and Jill stonework, but this is not always advisable as ivy actually helps to add strength to the hedge infrastructure. 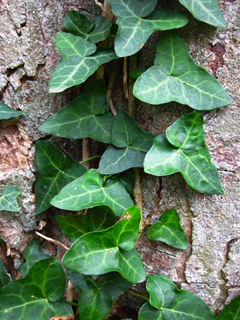 Ivy has also received a bad reputation at times as a tree parasite, rather like mistletoe (Viscum album), but this is not actually the case. The feeding roots are different to the climbing roots, developing only in substrate and feeding at a higher level than the deeper, penetrating roots of trees. There many examples of mature trees, trunks smothered in ivy, that are healthy and perfectly in harmony with their clmbing accompaniment. Ivy has also been attributed with the ability to penetrate building walls but unless the walls are crumbling this is generally untrue as well. Recent study is now suggesting that ivy can have an insulating effect, as well as helping to remove carbon from polluted urban air. With the approach of Christmas too, some of us will doubtless be using ivy to decorate our homes along with sprigs of Holly and fir, following ancient and once pagan traditions.

Ivy is beneficial to nature in a number of ways. Its dense growth and the way in which its leaves overlap minimally – to maximise capture of sunlight for photosynthesis – acts almost like tiles, leading to the creation of dry pockets of space. This is ideal for small animals to hide in, from tiny invertebrates to larger, small mammals and birds. Several of our Cirl bunting pairs chose to nest this year in dense ivy patches, well protected from rain and prevailing wind. 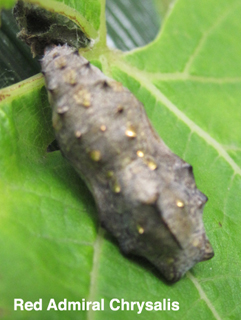 Mature ivy provides valuable food directly to both birds and insects if it has enough access to sunlight to become fertile. It will then produce flowering umbels from September up until December. The flowers smell unpleasant to humans but to insects the scent is irresistable, guiding them to a rich nectar resource. The reader may well have noticed large numbers of butterflies visiting ivy lately; the Red Admiral (Vanessa atalanta), migrant or newly-emerged from chrysalis has been especially prolific, late in the season. The ivy flowers, pollinated by so many visitors, are later replaced, as autumn advances into winter, by green berries. By February they have turned black, clearly visible to birds who are thus encouraged to feast upon them during the famine months of winter and early spring. 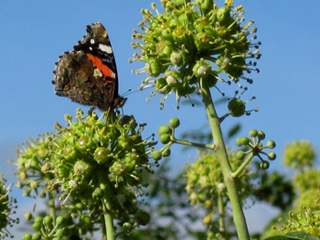 The late abundance of insects may have had a positive effect on the late production of broods of small passerine birds. The Roseland’s Cirl Bunting Reintroduction Project has recorded several late broods fledging successfully in mid to late September. Initially we were very concerned that the poor summer weather was having a highly detrimental effect on nest successes, with monitored pairs attempting three or more times to produce successful broods, and despite active food supplementation by the project. This depressing statistic was apparently being repeated across many species, with reports from the BTO coming in of a nationwide decline. However, Cirl fledgling numbers were lately and significantly increased by nesting successes at Place Barton, Gerrans and Treloan, leading to hopes that the overall population will at least remain stable this year, despite the poor summer weather. As a member of the Project, I will be taking part in monitoring our birds over the winter; currently I am surveying local farmland to record the fields of winter stubbles, where we are most likely to see groups of Cirls and other small passerines searching for winter food. 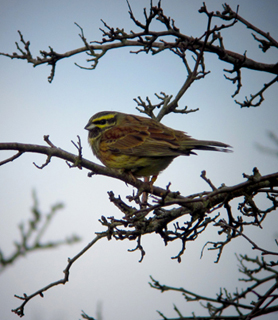 In early September at Tattams beach, Portscatho, a female common dolphin () became stranded. Attempts to help her were to no avail and she died on the spot quite rapidly. The body was removed for post-mortem analysis, however initial observations suggested poor physiological condition through emaciated appearance and an abundance of sea lice and lesions. It will be interesting to see if the results of the PM reveal anything further about this individual’s demise.

What to look out for this month in South Central Cornwall

We are well into the seal pupping period, so readers are more likely to see white coat pups around the seaward coast of the Roseland Peninsula. Often they will be on their own in a secluded spot where the mother has decided the pub will be safest from prying eyes and attack from other seals If you are lucky enough to spot a white coat pup then always keep a kind and respectful distance, especially as the mother seal is probably not far away, watching you. If you are at all concerned about a seal pup, the best guidance for what to do is given here by the National Seal Sanctuary at Gweek. Always do exactly as advised and never act alone in respect of seals. 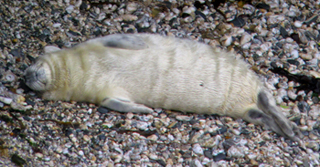 Now is the time to start looking out for migrant bird species, especially the divers and waders. The best places to see waders will be on expanses of mud flats in and around the Fal Estuary, such as at Trethem and Polingey creeks, Ruan Lanihorne and Ardevora. Out in Gerrans bay and beyond there will be increasing opportunities to see Grebes and Divers joining in the hunt for fish with our resident Shags and Cormorants.

What you can do for Nature this month

Build a Cirl friendly feeder
I have just built a new, caged bird table specifically aimed at cirls because of their ground-feeding habit and because a pair established near me fledged a very late brood, half way through September. They have taken immediately to the new feeder, so why not try building one yourself and see what species you can encourage to your garden? You may get Cirls visiting (view the movie clip, right). 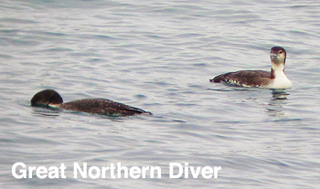 Readers are encouraged to make a diary note to look out for any thrush species seen feeding on ivy and other winter berries, as they may be Redwings (Turdus iliacus), Fieldfares (Turdus pilaris), Mistle Thrush (Turdus viscivorus) or Ring Ouzel (Turdus torquatus), as well as our more common Blackbird (Turdus merula), Song Thrush (Turdus philomelos) or Robin (Erithacus rubecula). If you’re not sure what the difference is between Redwings, Fieldfares and other similar thrushes, the BTO have added a new identification video to their collection to help you identify the species confidently.