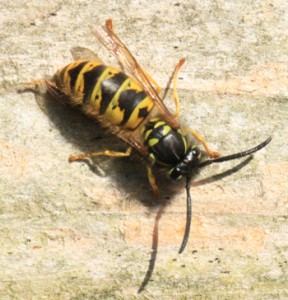 “What’s the point of wasps?” is a question, not infrequently asked by people attempting to relax on the beach with an ice cream, in the beer gardens, or over a delightful cream tea in late summer, surrounded by sweet things attracting annoying attention from the black and yellow buzzing animals seeking a carbo hit.

But such a question is as absurd to an evolutionary biologist as asking what point is there in our own existence. We have all evolved to occupy our ecological niche in evolutionary time. Wasps, like any other group of animals including us, have their ecological niches too, and every species is connected in some way to every other species through the foodweb and eternal life cycle. Even wasps share some of our DNA. 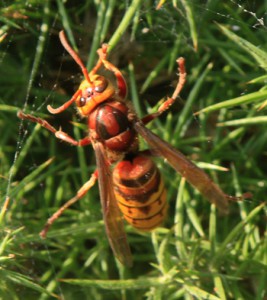 Wasps, along with bees and ants, are termed Aculeates, members of the Hymenoptera order of insects. There are approximately a staggering 9,000 species of wasp in the UK, some microscopically small. Many are solitary and parasitic, like this tiny Pimpla rufipes (depicted here). Just 9 species (0.1{c8c3b3d140ed11cb7662417ff7b2dc686ffa9c2daf0848ac14f76e68f36d0c20} of the total) are the large, social wasps familiar to us. The common wasp (Vespula vulgaris – top left) is ubiquitous throughout the UK, including here in the Roseland. While Queens measure around 20mm in length, adult female workers are smaller (12-17mm). Their life cycle begins in spring when the Queen emerges from her solitary hibernation, to start building the nest for a new colony. The colony will last just one season; only queens survive the winter. You can learn more about their fascinating seasonal life cycle here   from Buglife.

Another species, the hornet (Vespa crabro) is our largest species of wasp. This animal is distinctive for its strikingly colourful appearance, having a mostly yellow head, a ruddy and black abdomen, and the thorax a mixed pattern of browns, reds and yellow. The one depicted here was seen at Sett bridge, Ruan Lanihorne, which is a good habitat for this species. Like the common wasp, Hornets nest in cavities and old outbuildings where disturbance is minimal. They are considered docile in habit, but are secretive. If you come across one you may be startled as to its sheer size, but it is highly unlikely to attack you, unless deliberately harassed. 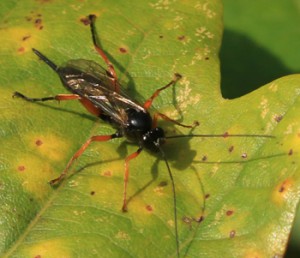 So what are wasps good for? Well, they are the gardener’s friend for starters. Their omnivorous diet includes many invertebrates regarded as pests on our precious plants, including caterpillars, aphids and small flies. Reducing and eliminating chemical control of pests, you may be surprised how you never needed them in the first place, if the predatory wasps can take over. By visiting certain species of flowering plants for nectar, they also act as pollinators. The complex paper nests that wasp colonies construct out of chewed wood also provide shelter for hoverflies, which are themselves important pollinators, as well as other invertebrates that have their valuable place in the food web. The BBC have a fascinating video here, presented by George McGavin, of the inside structure of a live wasp nest.

The Bees, Wasps and Ants Recording Society (BWARS) are particularly interested to receive records of Hornet sightings across the UK, as this species is under-recorded, and an accurate picture of its distribution is lacking. You can send them your records here.

The Cirl Bunting project is currently on a go-slow, now that our breeding pairs have stopped breeding activity and gone into moult. Having to regrow a complete new set of efficient flight feathers and general plumage, as well as keeping out of danger while not being able to fly so efficiently is a tiring experience for small passerine birds. So they hide away at this time, whilst trying to get enough to eat. We hope to see more of them as the autumn advances and they flock together for foraging and to be safer together. The breeding pairs tend to stick together on their territory nonetheless, which also helps us keep track of where everyone is.

The final count of officially recorded breeding pairs came to 39 this year, having produced in excess of 100 fledged young. This has been a fantastic year for our Cirls, and as long as the winter is not too harsh and next summer is as good as this one, then the population will continue to thrive.