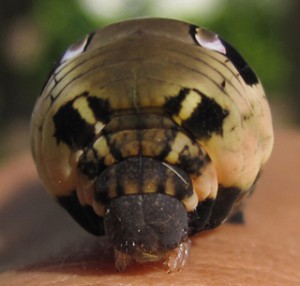 The last thing one might expect to see wandering down the booze aisle in Ralph’s Store, Portscatho, would be an Elephant hawkmoth caterpillar. Nevertheless, there one was, slowly making its way in the direction of the tills, and clearly in need of rescue from being trodden on.

How this particular animal came to find itself in such a place of human activity will remain a mystery, but the occurrence is testimony to the sheer numbers of caterpillars of this species that have appeared locally. 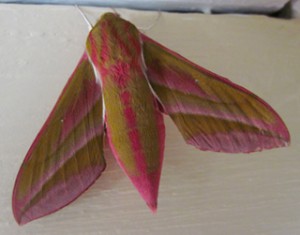 The adult Elephant hawkmoth (Deilephila elpenor) is a beautiful large moth of stunning pink and olive green patterning. It is quite common, and can be found in both the urban and rural landscapes, wherever suitable food plants are available for both the adults and larvae. The adults feed at night on nectar-rich plants such as Honeysuckle (Lonicera spp.), while the larvae prefer Willowherb (Epilobium spp.) and Bedstraw (Galium spp.); they are also keen on non-native fuscia, of which there is an abundance growing in our Roseland hedgerows. The larvae will grow to around 7.5cm in length before over-wintering as pupae, emerging as moths in late spring. 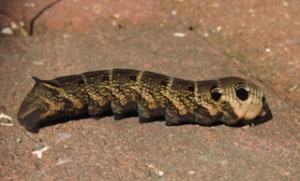 hile the adult moths can fall prey to a number of bat species, the larvae may fall prey to birds. However, they have a useful defence mechanism that can get them out of such trouble. When under threat, a caterpillar will truncate its front body segments into a large club-like shape, that creates the impression of a snake with large eyes. This behaviour is designed to induce a startle response from the predator, which may result in the caterpillar being rejected as a potential meal.

If you would like to optimise your garden habitat for moths and butterlflies, providing food for the adult and larval life stages is essential. Butterfly Conservation have some sound advice to get you started here. 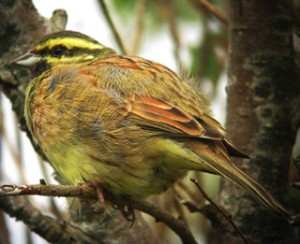 We have now reached 38 recorded breeding pairs, with a possible 39th to add. One pair has fledged 5 young, which is an impressive brood size for this species. Our one remaining 4 year old female has, with her partner (shown here), fledged 3 broods out of four breeding attempts. She has been our most productive female to date. This is due in part to her survival ability, and also due to her and her partner’s sheer dedication as parents.. Such productivity over the last 3 years will ensure that more of their robust genes will be passed on to future generations, improving the strength of the population as a whole. This is also a reflection of the optimal quality of the Roseland farmland habitat where these birds live. Long may it continue to be so. 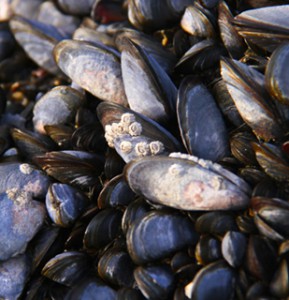 It has been suggested that 10 per cent of plastic that is thrown away ends up in the marine environment. Statistically, this is a highly significant amount. Marine animals can orally ingest tiny plastic particles. However, according to a new study led by the University of Exeter, it has been found that plastic particles are also absorbed through respiration. Microscopic particles resulting from environmental degradation of plastic waste are absorbed through the gills. As a result, the plastic remains in the animal’s body six times longer compared with the digestion process. As a result, the plastic may be getting passed up the food chain, getting more concentrated at each trophic level. Not only is this a concern in marine ecosystems, but one for land animals in the marine environment, including humans, who eat marine animals. Plastics are part and parcel of everyday human life, but we must keep reducing, re-using and recycling to minimise the damage that could affect us too if we do not.