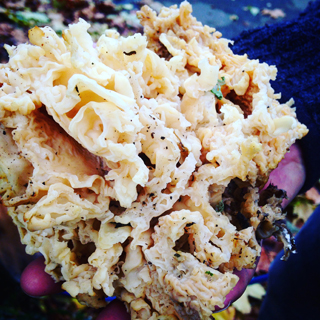 Does winter get on top of you or do you embrace it? The winter months can be damp, dark and gloomy but let’s inject a bit of Danish ‘hygge’ into December to warm our souls and see us through the long winter nights. If you are unfamiliar with ‘hygge’ (pronounced hue-gah) it is enjoying the simple pleasures, cozying up with warm fires and blankets and enjoying friends and family time. I love the simple pleasure of walking on beaches in the winter, collecting driftwood and foraging even through the colder months to go home with my harvest and cook up something delicious.

November showed off its autumnal colours as well as a good few edible fungi including my first cauliflower fungus which I baked with cheese sauce and the usual puffballs, shaggy inkcaps and deceivers. I’ve been nibbling, cooking and experimenting with seaweeds and contemplating the months ahead. The coast is the place to be, whatever the season but especially the winter months. I watched a programme about how the Americas came to be populated and sure enough the route the indigenous people took was along the coast, as this was the clearest way through but also the most abundant. Through the winter, you have the beaches to yourself and plenty of shellfish and frost hardy edibles to harvest. 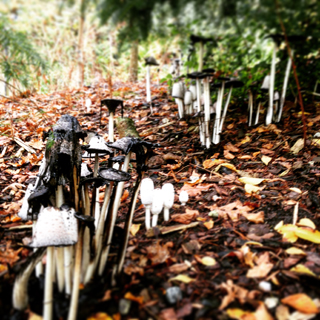 Have you ever picked mussels from a rocky shore? Let’s start with the basic rules of foraging shellfish. Always pick them from a clean source so for example don’t pick from near a sewage outlet (obvs!), don’t pick after rain for a few days as the run off from fields can be filtered by shellfish and don’t pick in the summer months. You will have heard of the age-old saying ‘only pick shellfish when there is an ‘r’ in the month – this is because the warm summer seas are much more likely to cause algae blooms which can be toxic to filter-feeders but also the majority of shellfish are breeding during the summer months (so best to leave them to it!). Go for the larger shellfish which have had a long life and pick sporadically so you don’t remove colonies. Another good tip is to pick the ‘cleanest’ looking shells for example when you are harvesting mussels try to pick ones with no barnacles on them as you’ll only have to scrape them off. 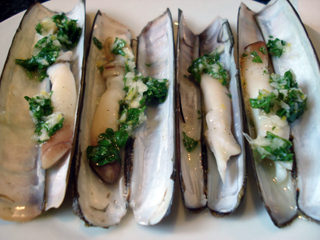 On the shoreline you find periwinkles and dog whelks. Periwinkles are herbivores and graze on algae whereas dog whelks are carnivorous. If you ever find a mussel with a hole in it, then a dog whelk has drilled through its shell with its razor-like tongue and sucked out the flesh. The mussels often get their own back as they spin out liquid byssus threads which we call ‘beards’ and this holds the whelks in place. Basically when the whelks have finished gorging themselves on mussels they realise they are stuck to the spot and die a slow, horrible death. Try winkles and whelks simmered in a court bouillon (stock) and pick out the meat from the shells with a needle, then dip in melted butter.

In silty or sandy estuaries at low tide keep your eyes peeled for clams and cockles. Cockles have ridges radiating from the hinge where a clam’s ridges run horizontally to the hinge. When my lurcher was quite young we camped near an estuary and he was great at spotting them and digging them out! I look out for a jet of water from the ground which gives away their hiding place. Clams and cockles really need purging to get rid of any sand or silt in them so pop them in salty water overnight so they can filter it out. Oysters can also be found on estuaries and my preferred method of enjoying them is to shuck (open) and pan fry them. They are so delicious and sweet I think they are better than scallops! 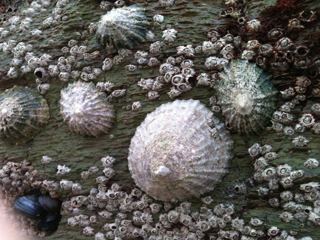 Now limpets may not tickle your fancy but in places like Madeira they have festivals to celebrate them – Festa da Lapa. It is all down to the cooking as they just need to be lightly grilled and adding garlic and herbs makes them pretty tasty. If you overcook them, they become rubbery and tough.

One last shellfish to mention, razor clams! If you haven’t tried them before, look for a sandy beach which tends to have empty razor shells. At a good low tide, take some salt and a squirty water bottle and look for keyhole shaped holes. Pour some salt in, squirt some water after it to jet it further down the hole and wait. If you’re lucky a razor clam will pop up out of the hole. Don’t bother trying to pull it out as they have a very strong ‘foot’ which they dig fast with but instead just hold it until it can be collected easily. Steam, grill or pan fry the shells open and try them with a herby butter.

This recipe is from my winter foraging book and named after my friend who cooked this up for us on Pentewan beach with the freshest mussels! 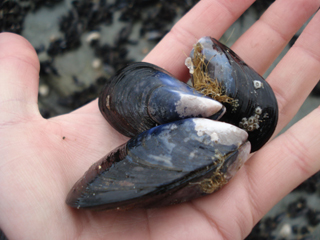 A thumb size piece of ginger

1 can of coconut milk

Soya sauce or salt and pepper to season

Chop the chilli (wear gloves for this!), peel the ginger and chop, slice up the coriander stems leaving the leaves for later, peel and finely chop the garlic and bash the lemongrass stems. In a large saucepan (John did this on a fire we made on the beach) add about 1 tbsp oil and add the chilli, ginger, lemongrass, coriander stems and mussels, stirring to prevent sticking. After 5 minutes or so, add the remaining ingredients except the coriander leaves, soya sauce or seasoning. Leave to simmer for 10-15 minutes. Taste and season accordingly adding the coriander leaves when serving.