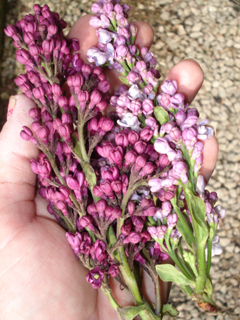 You’ve heard of ‘In like a lion, out like a lamb’ for March? I wonder if there’s one for April to May, such as ‘Just like a phoenix’!? I’ve been totally bowled over by the amount of beautiful, delicious edible plants emerging or flowering at this time of year. The different magnolia species were coming in waves; the honesty started flowering before I knew it with glimpses of purple appearing in hedgerows; the blues of the Camassias lighting up gardens like stars; the ramsons are flowering like crazy; the lilac blooms are bursting with their heady scents… this is possibly the best time of year!

When it comes to shrubs and trees, I always think of beech and walnut being two of the last to emerge. Everything seems to be exploding with life at this time of the year. I was on my way to a foraging walk near Lostwithiel and en route I took a back road… the intensity of the colour green from the ferns, birch, alliums and all the new shoots was almost too much to bear… as bright as the brightest peridot or emeralds, shimmering in the spring sunlight. 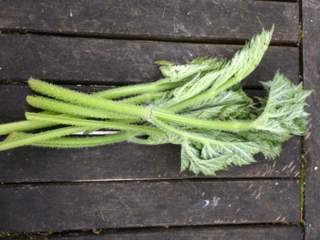 What have you been out foraging for? Have you made anything delicious from spring’s bounty? I have been eyeing up the lilac to make cordial from, keeping a close watch on the growing ground elder, delicious steamed and eaten as a vegetable and also checking out the flowering buds and new shoots of hogweed to steam and eat. Hogweed is everywhere and has had a lot of bad press due to its sap causing blistering BUT if picked with gloves or carefully with scissors, once it is steamed it makes a perfectly safe, delicious vegetable.

Later in the year when it produces dry flat papery seeds, they make an excellent spice with an orange zest and coriander seed flavour which works in both sweet and savoury dishes. Hogweed is in the carrot family but it is an easy plant to identify as it is one of the largest in the family and has hairs covering the leaves and stems. 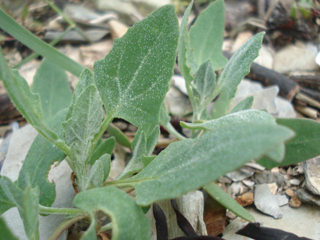 Another plant that is in the carrot family but one of the smallest, residing mostly in shady hedgerows is pignut which is a joy to find. It has extremely fine leaves and tiny white flowers set in the typical umbel shaped flower cluster of this family. If you have this on your land then count yourself lucky as it is the tubers that can be dug up and eaten which are nutty and delicious raw or toasted.

For a salad base I have been eating plenty of ox eye daisy leaves, lambs lettuce including the pale baby-blue star flowers, a smattering of sorrel leaves and garnishes of mustard flowers. Something you might have come across in massive pink cloud-like swathes is pink purslane, also known as Siberian purslane. All aerial parts are edible and the leaves have a metallic, iron flavour which works well in a salad with a punchy vinaigrette, with the pretty pink flowers as a garnish. 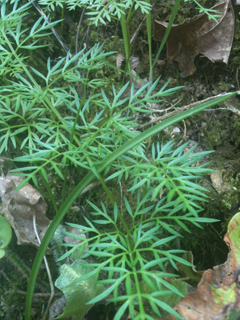 Bamboo is producing a tonne of shoots that are delicious and edible – if you pluck any bamboo shoot from the ground and peel it back to reveal its edible centre, try nibbling on it or finely slicing it and adding it to stir fry. All bamboos are edible although some can be dry and some can make you cough but most are pleasant. Bamboo can get out of hand if planted without root barrier to prevent it spreading but by constantly picking the new shoots that come up helps keep the plant from spreading too much.

The amount of fruit trees that are flowering is phenomenal, I don’t think I’ve seen such abundance like this before. Cherry trees, crab apples, blackthorn… all this blossom can be used to make syrups to flavour cakes, drinks and cocktails. I’m experimenting at the moment with making a lemon balm liqueur and can’t wait for the roses to start blooming to try and make a liqueur out of them. Mentioning blackthorn has just reminded me, I have heard of a recipe using the leaves of blackthorn to make an alcoholic drink called epiné which sounds delicious with an almond flavour and makes a change from always using the fruits which are sloes. 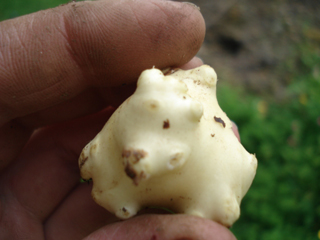 There are quite a few coastal plants that are great at this time of the year, including wild cabbage and atriplex. Wild cabbage is found in select locations around our coastline. Only harvest a couple of leaves per plant leaving plenty behind (never uproot any) and use them as you would cultivated cabbage leaves. I love eating wild cabbage by simply slicing and simmering in butter and water until tender, or by making cabbage rolls with a rice based filling.

Atriplex is in the goosefoot family and has small salty leaves that have an ‘iced’ appearance. Pick from a clean area and try eating them raw, steam them or add them to a dish at the end to have wilted salty greens. They are at their best now before they begin to flower and go bitter. Black mustard is still going strong and will be perfect for picking for quite a few months and try the yellow flowers when they appear in the summer for a sweet, hot sulphurous kick. 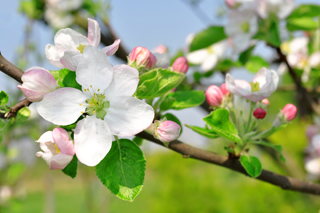 Juice of half a lemon

Zest of ½ an orange

Shake off any bugs and snip off the blossoms into a large bowl, discarding the green parts. Add the orange zest and lemon juice to the bowl. In a saucepan, heat the sugar and water gently until the sugar has dissolved and the mixture is about to simmer. Pour it over the mixture in the bowl, cover with a plate and leave it overnight. Strain the liquid after at least 24 hours. Use it for cocktails, with soda or lemonade or drizzle it over sponge cakes.