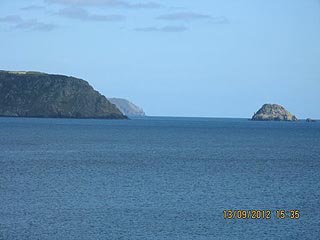 Looking out of the look-out window on one of our rarer beautiful days I could see the end of Nare Head and Gull Rock, with the Whelps stretching out beyond, tranquil in a calm sea, just the tops of the outlying rocks showing above water, easy to see and easy to identify. I could not help thinking about how different it must have been that February night in 1914 when the fine steel barque, ‘Hera’ drove hard onto the Whelps, the rigging freezing, the snow coming down, as she slipped off and sank in deeper water.

It was the 1st February when the ‘Hera’, outward bound from Chile for Hamburg, rounded the Lizard in such poor conditions that Captain Lorenze never saw the light and was reduced to guessing where he was. Fairly sure he had passed Lizard he decided to close Falmouth, a safe harbour, where the St Anthony light would give him his position. He had not realised how far past Lizard he was when he turned, and the ship drove into the blackness, heading not towards Falmouth but to Nare Head. Too late the lookout spotted the broken water around the Whelps and the ship struck. She slid off and, mortally wounded, ran on towards the shore, sinking as she went. She finally went down in the gap between the Gull Rock and the Head, with decks awash and her masts above water. The crew fired rockets but because of the falling snow and blackness of the night had no idea if they had been seen.

In fact they had. In those days there was a Coastguard at Portloe whose duty was to keep a watch to sea for just such happenings.

These were the days before every ship carried wireless and long before such things as automatic distress signals which can be picked up by sophisticated electronic equipment in the ‘Coastguard’ Station at Falmouth – now the Marine Rescue Co-ordination Centre. One can imagine the local man’s problem. A big ship aground, terrible gale conditions, and he needed to sound the alarm and get a lifeboat launched. The Portloe boat had been taken away and the nearest was Falmouth, contactable only by old fashioned telephone, passed from operator to operator. But eventually the Falmouth boat was launched. The ‘Bob Newbon’ was a pulling lifeboat, so the crew had to man oars and row out into a freezing gale, utter blackness, all the way to Nare Head. When they got there they could not at first find the wreck and it was not until 4.30am, six hours after she struck, that five men were pulled from the rigging and saved. The rest, 19 of them, had drowned or frozen to death. 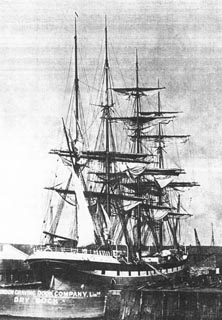 During this time, of course, Coastguards were a vital part of the rescue at sea system. Nearly every port had them, even small places like Portscatho and Portloe, often a group of resident men who lived with their families in the village. Lookout huts were built along the cliffs in good vantage points. Even up to the 1950’s ships had to close the land to get their orders as to their final destination, and the phrase ‘Lands End for Orders’ was a common destination shown on manifests. It actually meant The Lizard where a signal station was maintained to pass the orders on. Many ships were still sailing ships, so that the onshore gale was a real danger and the early warning of a ship in trouble often came from the old Coastguard Lookout.

Our lookout dates from about the start of the Second World War and was fully manned by professionals up to the general closure of these lookouts in the 1990’s. A few years later it was re-opened by the group of volunteers who, with some personnel changes, still run it. We are not professionals – but we seek to give a professional service. Nowadays we have little to do with the big ships on the horizon or even those heading in and out of Falmouth. They provide us with interest when things get boring but that is it.

Modern ships have sophisticated electronics dealt with by equally sophisticated equipment at ‘all singing all dancing’ Centres like MRCC at Falmouth. But the amateur yachtsman has no such gear when things go wrong. True he can radio to MRCC, even press a button in a hurry which does that for him, but he needs to be in an area of communication in order to do that. Just like your mobile phone has ‘no signal’ blackspots so are they found at sea – or rather close in. In our case a lot of Gerrans Bay is blackspot so far as Falmouth is concerned so one of our tasks is to listen for a call from such a yacht and make sure that the message has reached Falmouth. Again, we can see and they can’t. They are not encouraged to look out of their windows, their major task does not require it. Indeed their windows are high up so you cannot see out when sitting down. Even if they could Grebe Point gets in the way. So it is not unusual for them to ring us up and ask if we can see something which has a bearing on what they are doing. An Inshore Rescue Boat (IRB) coming into Portscatho Bay or in towards Pendower or Carne can lose communication. Being low down in the water the crew may not see the casualty’s head. But we can see their target and guide them in.

It’s a worthwhile job, with satisfaction and a social atmosphere. Sometimes it’s dead boring, looking out of the window when the rain beats down and only the occasional dog runs on the beach. You can get very wet walking out to the lookout in a rain bearing Force 6 from the South West. But your being there might save some child’s life. And that is not a wild claim It has never happened at Pednavaden – but it has elsewhere in the country. So give it some thought and, if you are fit enough to walk 200 yards of the Coast Path give Pat Rigley a ring – 01872 501838