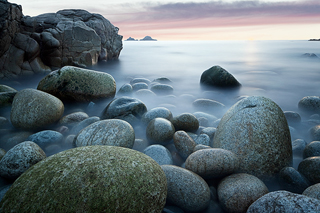 What a great summer it’s been for photographic opportunities this year. We have had non-stop sunshine right through July and August and I hope, like, me you managed to get out and about and make the most of it. Getting out and about taking photos is such a joy for me, I cannot think of any better way to spend my time.

These shots were taken at Nanven Cove; it is situated at the end of the Cot valley in the far west of Cornwall near the town of St Just. Two small west-facing beaches sit in the cove, which lies approximately 5 miles due north of Lands End. Both beaches are predominately rocky with some sand revealed at low tides.

These two beaches have become a mecca for landscape photographers from all over the world. I avoid them like the plague in high season as you find so many photographers swarming all over them which makes it difficult to get a clear person free composition. So I always head down there when they have all gone home.

Naven cove has been made famous by all the photography magazines featuring it so heavily; I have even had my own shots featured. It takes me about an hour and a half to drive down to it and is a location that I always enjoy visiting as it is so different from any other beach that I have seen.

The beach is fully protected and you are forbidden to take any of the stones or rocks away with you. The thing that first strikes you when you first arrive are the huge smooth boulders strewn across the beach in their thousands all in different colours shapes and sizes. It is nicknamed the dinosaur beach for a good reason, as they look like huge dinosaur eggs waiting to be hatched.

If you look up to the cliff on the right you will notice the cliff face full of these boulders just waiting to come crashing down. So it is a beach with unique and interesting geology that was formed in the Ice age and has been studied by scientists for years. 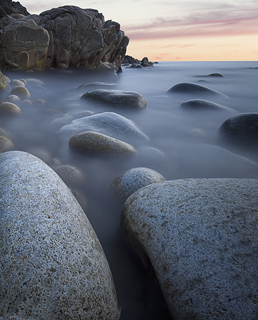 The shot was taken using a long exposure technique and this is what I would like to talk about this month.

Have you ever seen those dreamy photographs where the sea and sky have taken on a dreamlike milky look, the sea smoothed out to give that ethereal relaxing quality the sky blurred and softened making it appear like a fantasy world?

The camera equipment that you would need to achieve such a look is a digital single lens reflex camera, DSLR, sturdy tripod cable release, one or two neutral density filters.

The idea is that you have to slow down the shutter speed so that the sea and sky, which are both moving, become blurred. The land, which is static, is not affected by the slow shutter speed so it stays sharp.

The settings that you need for your camera are the lowest ISO that your camera allows; normally 50 to 200 on most cameras. You could stop down your lens to its smallest aperture but for quality I would go for around f@8 f@16. Only close down further if you cannot achieve a shutter speed of at least two seconds. (I will give an explanation of what f@8/f@16 mean at the end of this article.) 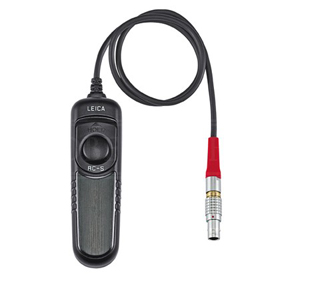 Most cameras only let you set a maximum time of 30 seconds. If you want to go longer you have to switch to bulb mode. Bulb mode is normally found next to a manual mode on your camera dial. In bulb mode you can keep open the mirror for as long as you want to, at least as long as the battery lasts.

This is where you need the camera release cable, press and push the button upwards so that it locks and stays locked until you press it again to release it. Some cameras have a second timer on the top so that you can easily check how long you have been exposed for, if not just use a wristwatch. When you have taken the shot have a look at the results on the back of the camera.

Make sure it is properly exposed and you are happy with the long exposure effects. If you feel that you want a longer exposure and cannot achieve that with your camera settings then you will have to use ND filters to cut out some light, thus increasing the shutter speed. 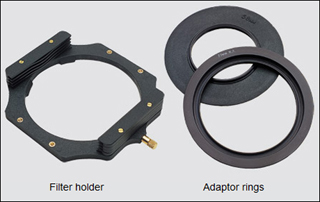 There are various makes of ND filters on the market some square like the Lee system that easily slot in a holder that is attached to the end of the lens. Other’s are round that screw onto the thread on the end of the lens, both have advantages and disadvantages. I prefer the square system as I find it quicker and more flexible to use.

ND or neutral density filters are normally made of glass or resin and are designed to cut light from reaching the camera sensor. They come in various strengths, cutting out up to 10 stop’s of light. Apart from blurring sea and sky they can be used to good effect in crowded city centres making people disappear.

I took this image a couple of years ago and I can remember the experience very vividly. I arrived early evening hoping to get some colour in the sky as the sun went down. I had been wading around the shoreline in my wellies trying lots of different compositions, playing with different exposure times and angles. 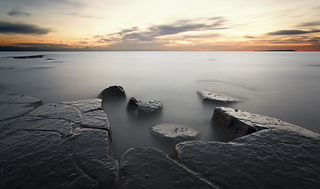 I eventually moved over to the left hand side of the beach, which I thought had the best opportunities. I took several compositions around this small area every few steps opening up a different point of view and perspective. As the light began to drop the sky started to take on that soft pink pastel look that seascape photographers love so much.

With the pink sky perched across the soft slate grey of the boulders and the long exposure making the sea soft and milky I knew by looking at my three inch high resolution camera screen that I was in for a productive night’s shooting. It was one of those special nights that everything came together so nicely for me with all the elements in the right place, light, location and tide. This type of photography is not without risk, although the sea looks calm and smooth, it was in fact rushing at me at a powerful pace threatening to overwhelm the camera and me at any moment.

You have to have your wits about you and be prepared to act quickly as the tides and wave sizes can change rapidly. Also you have to be prepared to get wet… very wet. On this occasion I was soaked through to my skin up to my shoulders. I had a very soggy wet drive home when the shoot had finished; this is not unusual when working so close to the shoreline.

An even bigger risk is losing your camera gear to the sea. On this occasion I wanted the viewer to be involved in the scene so it meant setting the tripod and camera up low almost in line with the sea to give the shot punch and impact, it meant that I had to snatch the tripod up high in the air to avoid it getting wet every time a huge wave came in. 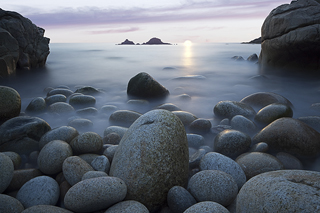 Seawater and camera electronics are not a good mix, there is only ever going to be one winner in an outcome like this.  In fact I have lost two very expensive DSLR cameras in the last two years in situations like this. So be careful out there, watch the tides, do not get cut off from your exit when working on beaches especially late at night when it is dark. It does not matter how good the shot might be it is not worth dying for.

The f@8/f@16 that I mentioned  earlier  is the aperture size. The aperture is the hole in the lens that changes to bigger or smaller sizes depending how much light you need let in, they are named the f/stop. f/stops are a bit confusing   because the numbers appear so arbitrary. This is the standard sequence of f/stops from f/1.4 to f/22. Although it may not seem intuitive at first, in this sequence the f/1.4 setting lets the most light in while the f/22 setting lets in the least.

A lot of people struggle with this concept, give up and do every thing in auto mode. For any of you that hope to take photography seriously, I would urge you to get to grips and learn how the triangle of ISO, SHUTTER SPEED and APERTURE interlink with each other and form the bedrock of photographic exposure .