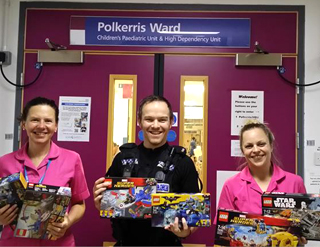 Sick children at RCHT in Truro have benefited from a police officer’s initiative to dispose of stolen property to a good cause.

PC Ross Waite from Camborne Police Station dealt with a shoplifter who stole hundreds of pounds worth of Lego from various shops in West Cornwall. The man admitted the thefts and was given a conditional discharge at court.

Although it was believed the property came from Tesco stores, police were unable to prove this so didn’t have an owner to return the boxes of Lego to.

With permission from Tesco management and the police legal department, PC Waite arranged for the Lego to be donated to the children’s ward at Treliske Hospital in Truro.  The staff are planning to have some of the toys on the ward and give some boxes to sick children at Christmas.

PC Waite is pictured with staff from Treliske’s Children’s Ward.