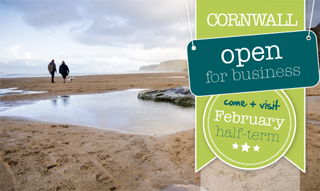 Well-known restaurateur and chef, Rick Stein and Eden Project Founder, Tim Smit, have joined Cornwall in a high-profile campaign to fight against sensationalist reports that Cornwall is ‘cut-off’ following the recent storms.

The Padstow based Cornwall ambassador, features in a short video which aims to restore visitor confidence by showcasing Cornwall as being open and ready to extend a warm welcome. Stein comments: “The way the storms have been reported it almost seems as if Cornwall is shut off. I did a little tweet the other day saying that it is a lovely day in Padstow and that I had been for a swim, my wife rang me up and questioned if I should be saying this at this terrible time – but why not? Cornwall is as beautiful as ever and there’s no reason why people shouldn’t come and enjoy it!”

The video (below), which focuses on things to do during next weeks half-term school holiday, was commissioned by Visit Cornwall, the Cornwall Development Company tourism service, to readdress the misconception that the whole of Cornwall is affected and to squash concerns that Cornwall is inaccessible.

Malcolm Bell, Head of Visit Cornwall, said: “Whilst some parts of Cornwall have taken a battering and the damage to the rail network is causing some travel disruption, it needs to be stressed that all other travel links into Cornwall are running as normal – in fact they are thriving, with the number of flights between London Gatwick and Newquay Cornwall Airport doubling to six a day from Wednesday (12th February).

“The small areas affected are very localised and being used to this weather, our businesses are being characteristically resilient and dusting themselves off. Cornwall is very much open for business and raring to go – February half-term is a great time to visit!”

With its Freaky Nature half-term activities the Eden Project also adds strength to the campaign. Sir Tim Smit adds: “It has been one of the wettest early winters we’ve ever seen but we’ve also had some gorgeous sunny days. Cornwall is of course open and we are expecting a large number of visitors to come and enjoy what we have to offer here during half-term. Even when it’s stormy and raining outside, it’s nice and warm in our Biomes. We probably have one of the best and most spectacular undercover attractions anywhere in the world.”

The South Central Cornwall tourism industry can get behind the campaign by using and sharing any of this content on their own websites and social media profiles or rick’s video, here: