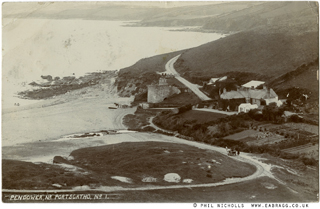 It’s December now and you can’t beat a bracing walk across the cliffs from Portscatho to Pendower on a crisp winter’s day. Throw in a flask of hot coffee and that’s heaven for me!

I’ve been looking at Edward Bragg’s images of Pendower and it seems his visits date between 1906 and 1908. Once again, it’s possible to work out the timescale of his photographic excursions as he was using the bulk of his work to create real-photo postcards, printing his images onto photographic paper with a ‘Post Card’ text backing along with his publishing name and address, and, a box to guide correct placing of a pre-paid postage stamp. Once these passed through the mail system their postmarks become the dating evidence. 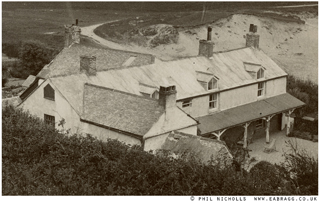 OK, I know when Edward was at Pendower. What else can I glean from his images? I can see the masterly composition of a competent photographer able to wring everything from his basic kit. I also see a little sloppy darkroom practise; cross contamination of photographic chemicals with fingerprints marking the emulsion. Without forensic examination we’ll never know whether this was himself, his wife, or perhaps his eldest son who followed in the photographic business (according to his school report) but that would just be taking the research too far!

The first pin-sharp image shows the house looking to be in good order, tidy allotments visible, and, what I believe is a lime kiln with horse and cart on the track with another alongside the building itself. There’s a boat right on the shoreline too. 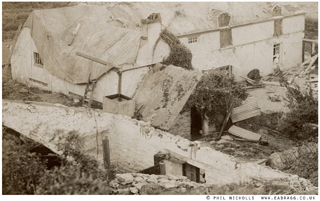 The second image is a detail from another of Edward’s photographs again dating C.1906; it shows Pendower House looking pretty tidy, there’s a smoking chimney in the midst of sound looking roof sections, deckchairs on the verandah, a tranquil scene basically. When comparing this to another frame, the third image, there’s obviously intensive storm damage but I also notice that parts of the building have been overcome with ivy.

Edward Bragg produced a set of images of Pendower House detailing damage after what he called ‘A whirlwind’, storm damage that occurred on August 28th 1908. 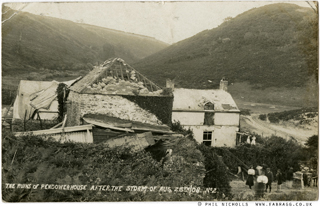 In the third of his photographs that I’m showing here we can see how the building took a real battering, tarpaulins cover the roof and windows are missing. The verandah has been completely destroyed too but I wonder if there had been some neglect between ’06 and ’08 with all that vegetation growing across walls and roof? Slate roofing is easily lifted by high winds after ivy finds it’s way in….

The last couple of images again relate to storm damage of August ’08; one shows a number of people gathered outside the house where the outbuildings have lost their galvanised roof cover and slates are gone, the battens revealed. The final piece is titled, ‘The Whirlwind at Pendower. The Sailing Boat Weighing Half A Ton Was Lifted 100 Yards And Split In Half’. 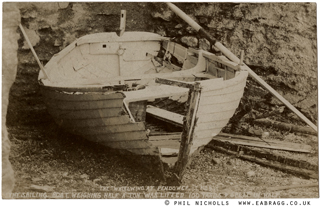 Was this an exaggeration by Edward, I’m not sure, I believe he liked to stretch the facts a little and it does look impressively scary on a commercial print at the end of the day. I haven’t been able to find any reference to events of this date as yet, I will pursue this for the Edward Bragg website and aim to re-create all these locations as they are today, a shoot in spring perhaps if anyone cares to join me!

Please continue to visit www.eabragg.co.uk and of course ea bragg photographer on facebook to see updates on my quest to tell the story of this ‘Master Photographer’ who fell in The Great War.