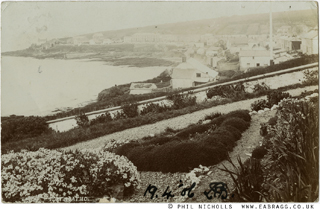 Frequently visiting Portscatho at the beginning of the Twentieth Century, Edward Bragg left us a wealth of images showing the village and harbour in pin-sharp detail. 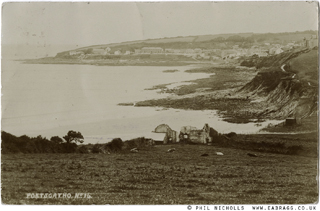 This months article is picture-led and I’ve selected some of his views that include Pednvadn and The Mermaids Chair, Porthcurnick Beach, the village from the cliffs, a panorama showing access via The New Road and a glimpse of the harbour C.1908. I love seeking the spot that Bragg would have used to place his tripod and am beginning to re-create his images as we see them today. I don’t feel the village has changed significantly in the last hundred years or so, there are more dwellings perhaps, but, if Edward were to return today I’m sure it would all be pretty familiar to him. 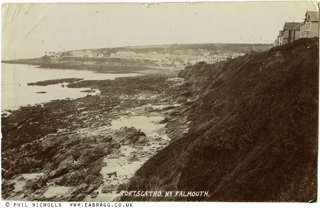 I can’t say exactly when he first set foot in Portscatho, but from the fact that he was producing his own hand-printed postcards, we can get some dating guide by looking at postmarks on their reverse. The earliest I’ve discovered is a view from a garden on Admiralty Terrace that was sent from the village on April 20th 1906. 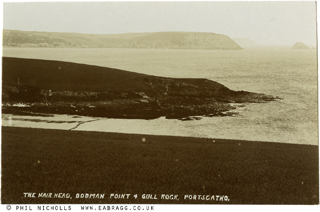 Considering his work ended on his joining the army at the close of 1915 this shows him to have been in Portscatho on photographic excursions across a decade. He was extensively shooting mining scenes in the Redruth around 1906 and I always imagine what a breath of fresh air the cliffs of The Roseland must have been in comparison, literally! 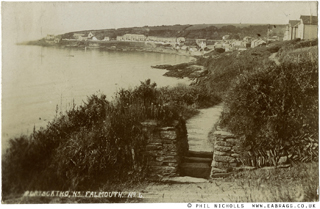 As I write, views from Porthcurnick feel especially topical. Erosion suffered in the storms this year hit the beach and sandy promontory below The Hidden Hut pushing the shoreline back a considerable distance. In Bragg’s image of Porthcurnick, looking beyond the ruined cottages, a track can be seen crossing what is now the beach where it joins the path across the cliff. Taken close by, his image of Pednvadn unsurprisingly shows little change.

A hut has appeared on the point but that’s about it. The Mermaid’s chair too. That of course doesn’t change but the titled image by Bragg, dating C.1910, got me wondering how long it’s been known thus. Local historian Hilary Thompson tells me it went by the name during her Grandparents time in the mid-19th Century. I wonder if we can push it back further with a dated sketch or painting perhaps? I’ve included my recent photograph alongside that by Edward Bragg. 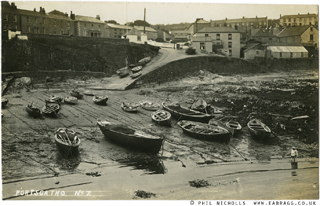 A view of the village square shows the position of the pump at the time, while a vantage point from The Nelyas looks across gardens towards The New Road. The harbour is captured in great detail and a rocky view from behind the breakwater  (pre-extension) hadn’t changed until recently. Those storms again… this year they created a new beach on this spot, perhaps that was one of the few good things to have happened during the recent pounding! 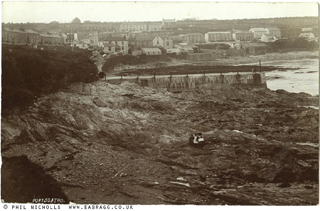 I’m finishing on The Percuil River this month. I’ve had a photo-card by Bragg (simply titled ‘Old Cornish Cottage on The Percuil River, Falmouth’) for a number of years and just couldn’t find the location. Studying a panorama showing the St.Mawes side of the river opposite Percuil I spotted a tiny detail, the familiar shape of that cottage I’ve been seeking for so long. There it is! A hi-res scan confirms the spot and another mystery is solved. Take a look at the last couple of images on this page. 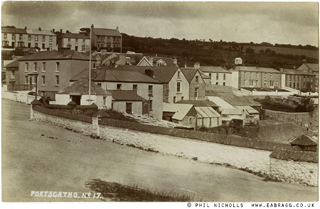 I continue to seek an example of a Portscatho photo-card by Edward Bragg with postmark pre-dating April 20th 1906 so please check the family albums and let me know what you find. Also, I’m looking to record more examples of his Roseland Peninsula images so don’t hesitate to contact me if you find something. His work is easily recognised with that small white strip of text across the front, almost exclusively running from the bottom left-hand corner. If in doubt, check the reverse, his name on the back is a dead giveaway!

Again, I have been asked for prints and canvases of his work and all enquiries of that nature please visit the Bragg website for information or contact me via email info@philnicholls.co.uk 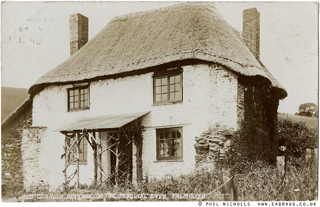