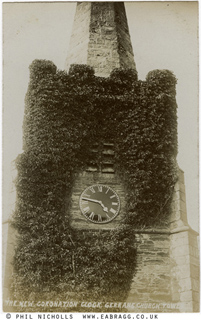 I’ve spent years searching for Edward Bragg’s images of The Roseland, Portscatho in particular, occasionally I come across his views of Gerrans.

This month I’ve selected a set of six of his photographs that actually include in their caption, ‘The New Coronation Clock, Gerrans’. Gathered across a period of twenty-five years, now scanned and recorded, not only do I notice the same people posing in the background but also the hands of the clock itself which pass from approximately 4.47–5.19 pm!

On his visits to Portscatho from Falmouth (via Percuil) in those pre-war years until his voluntary service (1915), Edward would often have passed through Gerrans Churchtown. Maybe a themed shoot featuring the clock was his one and only purposeful photographic trip to this spot. 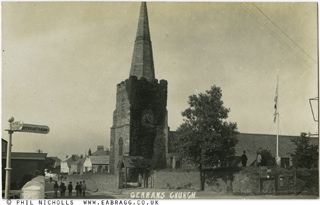 The Clock, celebrating the coronation of George V in 1911, was placed in the tower with money raised from public subscription. I don’t have an exact date for its installation, but, considering George came to the throne on May 6th 1911 and the postmark on one of these images is August 3rd, well, we have a rough idea I suppose. Read on and there’s one more date revealed under high-resolution scan that may be another clue… 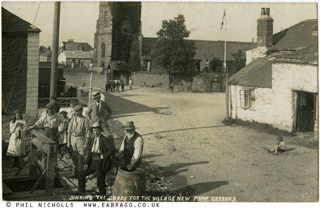 Here are the times shown in each image:

4.47pm: The first image is a close-up showing how the ivy was not actually stripped from the tower but just cut away to accommodate one of the clock faces. This pin-sharp image is probably cropped from an original full frame negative; I do believe Edward had progressed from glass plate to actual film by this period. It does show the fine quality achieved by the medium!

4.57pm: Edward has stepped back and shot the church with the lych gate visible, to the left, children pose in the street while a couple of chaps stand in the churchyard, one looks to be wearing a dog-collar, might this be Archibald Wood, rector at this date? We see those classic old signposts to the left with ‘Portcuil & Portscatha’ displayed,and, there’s the post box set into the wall. The village notice board is visible too and as good as the image quality is, it’ll take a bit more work to decipher the text on the posters there. The wording that is clearly visible includes, ‘A Grand Evening Concert, Saturday July 15’. This I believe is the clue to the date of this photographic half-hour in Gerrans. 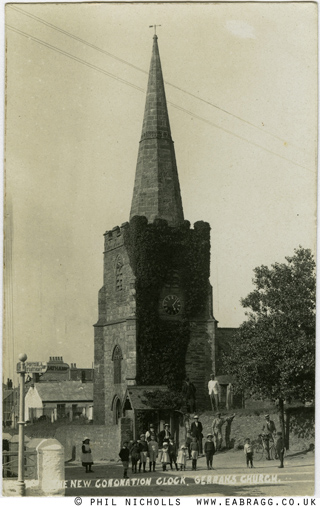 5.00pm: Stepping back further we see the crew involved in the sinking of the shaft for the new village pump. The workers look to camera and have been joined by a few villagers; the same bunch of children hangs back by the church while the two chaps watch from the churchyard. To the right of frame (behind a child sitting in the motor-car free road!) is an open stable-door. On the lower panel a hand is just visible, perhaps an unwilling subject just observes the moment being recorded by Edward Bragg. There’s another poster here on the door, crumpled and barely readable although I can see the words ‘Public, anniversary’, and, the name F.Beard.

5.07pm: A few steps forward again and here’s a ‘portrait format’ image of the church. The children are still in place but have been joined by some of the workmen and a chap with a bicycle. The two chaps in the churchyard have moved closer to the gate. I wonder if Edward was directing the onlookers? Given the short time between frames he must have been working quickly.

5.13pm: Edward steps forward into Gerrans Square. People gather around the shop while a cartload of timber, pulled by a pair of donkeys is in the foreground. I imagine the timber is for the works at the pump. Edward has definitely posed this frame as I’ve seen another version where he’s moved the workmen into a different position. 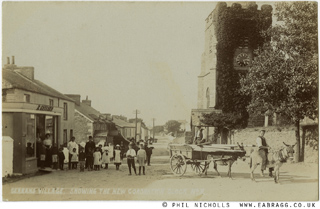 5.19pm: This frame shows the other face of the coronation clock and a very smart looking gate in the church wall; Wearing a white jacket and to the right is a man who stood in the churchyard in the previous frames; On the left a little piece of village construction is captured by Edward Bragg.

Roofing is in progress while new window frames are stacked, partially covered with canvas, slate and bricks litter the front of the site on which a pile of timber sits; Scaffolding is not a priority and a bucket sits precariously on the roof above the chap who is looking to camera. There was no danger of a health and safety inspection in 1911! 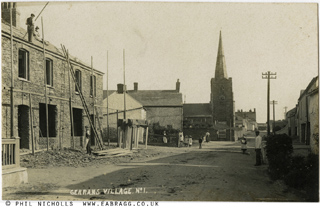 These six images capture half an hour on a day sometime in 1911, June perhaps or the first weeks of July? I really hope to narrow this down. I shall pursue the information on the notice board posters with a bit more editing and will be creating a related gallery on the EA Bragg website (www.eabragg.co.uk) if you’d like to follow my progress. Please don’t hesitate to contact me if you have something to add to this article. I welcome any thoughts; perhaps a search through your family photograph collection may extend our half hour with Edward Bragg, please have a rummage!