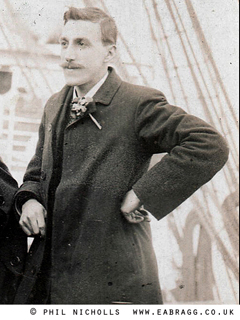 The life-story of photographer Edward Bragg reads like the script of a novel!

Last month I began by saying how elusive he is as far as personal records go; he does appear in census records where I’ve tracked his passage from childhood in Lancashire to his home in Falmouth from which he left for war after joining up in 1915.

So, how have I put the tale together to date?

His work appears for a short while in The Cornubian (a Redruth based newspaper), a school report exists for a couple of his children, and, The National Archive hold documents which relate to his taking out a copyright on a pair of character portraits in 1907. That’s pretty much it. His military records were destroyed in The Blitz, his descendants (recently tracked down) know nothing about him and basically this is how it goes on.

But, back to the beginning of his story; There’s a period around the end of the 19th Century and beginning of the 20th where I can’t find him but believe he was working in Blackburn, Lancashire, possibly with the celebrated film-makers, Mitchell & Kenyon. Perhaps this led to his mastery of documentary photography. I’ve yet to positively establish the connection. 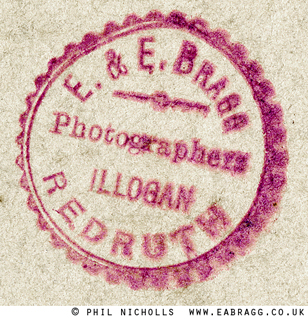 1901: I find him in the census for that year, lodging in Redruth with his wife and child – his wife, Elizabeth, had relatives in the area which probably explains why they chose Cornwall on moving from The North West.

1903-05: He eventually settles in Illogan and I’ve recorded a small number of his early photographic prints from this period. On making hi-res digital scans of his photographs taken from Illogan Church Tower (C.1903) I realised that some of them would work as a panorama – three fit together perfectly and I don’t know how he was able to shoot and produce a perfect panorama especially from the awkward space atop the tower. I’ve been there to try and reproduce this image and it’s not an easy space to work from especially if you’re using bulky kit with tripods and glass plates! It’s difficult enough to make the ascent through the levels of the tower, squeezing through tiny trapdoors, climbing across the bell-frame and finally emerging through a granite aperture feet first without having to carry photographic equipment. Did he hoist his gear up the outside of the tower? That’s what I had to do! 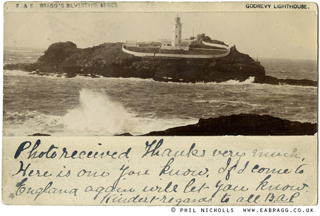 Most of these early prints are ink-stamped to the reverse stating ‘E & E Bragg, Outdoor Photographers’ describing a working partnership with his wife Elizabeth. A series of postcards is created at this time too; a photographic print is simply stuck onto card, and marked E & E Bragg Silvertype Series’. Looking at the postmarks on all the surviving examples I’ve seen they must date to 1903 as they date so closely across a few months. It’s all part of the detective work. 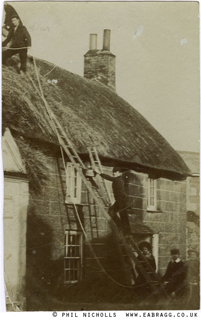 Referring to last month’s instalment, I talked about the use of postcards as a most efficient, regular and reliable method of pre-First War communication with a number of collections and deliveries per day. This was the hey-day for postcards and Edward Bragg made his own prints by the thousand. I’m piecing together his story through these real-photo postcards that he created and actually used himself, occasionally even roping in family members as models to appear in a landscape. 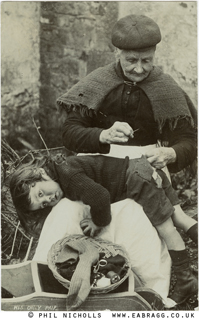 The majority of images are town and seascapes shot for bulk sale but occasionally something more personal to the photographer and his family is found as mentioned above. One of the earliest shows the thatch on his Illogan home being repaired after a fire that apparently destroyed much of his work and photographic materials. Five months later a report in The Royal Cornwall Gazette tells of his appearance in Truro bankruptcy Court – it states that he left ‘a situation’ in Huddersfield due to severe illness, owed money to his previous employer and had lost £200 through a supply of inferior photographic materials. The Gazette reports that his examination was concluded and he was allowed ‘to pass’. I wonder if there was a link between the fire and the bankruptcy hearing?

Thanks to Linda Flynn, Great Granddaughter of Edwards Eldest Brother, we get another little part of the Bragg story. From a few cards in her possession, each with a quirky note on the reverse scribbled by Edward himself, we get an insight into family life – an image of a boy having his shorts repaired (whilst still wearing them!) has a note by Edward saying, “This is my eldest boy Harry, we have sold 40,000 cards of this subject. Everything & everybody is turned into account at this establishment for profit or loss”. On another of Linda’s images featuring Edward and his Sister he playfully describes the two of them as “Distinguished individuals” and “Excellent samples of the Bragg family!” 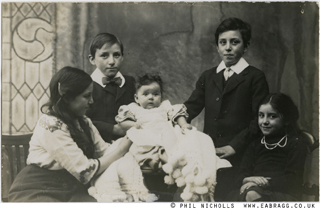 1906-07: The random personal notes I’ve discovered scribbled on Edward’s own real-photo cards from this Illogan period are a valuable source of information regarding his business; one has text written perhaps as an ad for The Cornubian. He says, “We are now getting up a splendid series on Cornish mines and miners. We have some excellent views of underground workings taken by flashlight”. Another tells of his illness and how he soon hopes to be well enough to get his glass photographic plates developed. 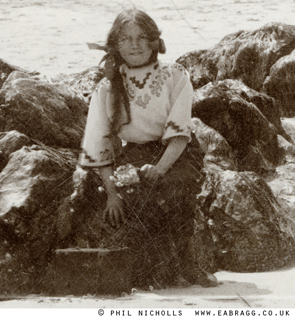 1908: A little later and he’s moved to Falmouth – a shopping list appears addressed to a hardware store in Market Street there, it’s written on the back of one of his shipwreck images. This really is a glimpse into his life on a particular day. He’s asking for Green paint, white paint and a small brush for painting around edges and corners. He also requests half a dozen ‘eyes’ for fixing stair rods! This is his second DIY note I’ve found.

1910-12: Looking at a portrait of the Bragg children, contained within a Christmas card and probably mailed to relatives, friends and clients, we see his eldest daughter Marian in a distinctive outfit. Comparing a couple of photo-cards of Kynance Cove we see her again wearing what must have been her ‘best’ or perhaps favourite top. A hi-res scan of one of these images captures her sitting with a fist full of sea-pinks, some of their heads scattered around a camera case at her feet. I’m constantly checking for these Cameo appearances in the commercially produced pieces! 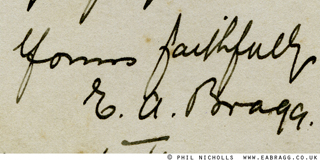 1914-15: A descriptive note to a relative of Elizabeth Bragg finds Edward saying “Thinking of joining up, but never get further than the thinking”. He hopes to get into the photographic section of The Naval Air Service but says he has no Naval friends to recommend him. “….wages & allowances are good & Liz & the children would be all right” he explains. This affectionate note, also describing business being slow, is simply signed Ted. He does eventually join up at the end of 1915 and as far as we know was gassed, ending up living on his army pension at the Falmouth Poor Law Institute. He died there in 1928. 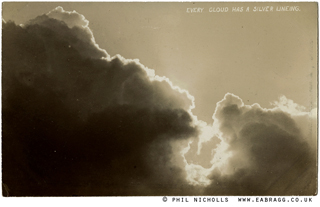 I hope my search is of interest to you, it’s a story based on scraps of material, a little documentary evidence, and, basically my interpretation of this photographers images. Please remember, there’s plenty of speculation here and these are only the bare bones of the story. The dates in this piece are only a loose guide too. I’ll finish with a photograph of a sunburst over Falmouth that has the wonderfully optimistic quality and title, ‘Every Cloud Has a Silver Lining’.  Optimistic. This is how I like to think of Edward Bragg, loving life and roaming our creeks and countryside in pre-war Britain.

Now you have some of the background it’s back to Edward Bragg’s images of Gerrans and Portscatho next month.

Again, I have been asked for prints and canvases of his work and all enquiries of that nature please visit the Bragg website for information.

Special thanks to Paddy Bradley for permission to use some of the images included here.