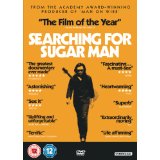 In the late ‘60s, a musician was discovered in a Detroit bar by two celebrated producers who were struck by his soulful melodies and prophetic lyrics. They recorded an album that they believed was going to secure his reputation as one of the greatest recording artists of his generation.

Despite overwhelming critical acclaim, the album bombed and the singer disappeared into obscurity amid rumors of a gruesome on-stage suicide. But a bootleg recording found its way into apartheid South Africa and, over the next two decades, it became a phenomenon.

Two South African fans then set out to find out what really happened to their hero.

This really is THE film of 2012. Even if you’re not into music, this extraordinary documentary from the people who bought us “Man On A Wire” is an absolute must-see.

Verdict: Can’t recommend this highly enough and a great start to your 2013 DVD collection. *****

(This film will be shown at the Harbour Club, Portscatho on Tuesday 8th January – Click here to see trailer.)