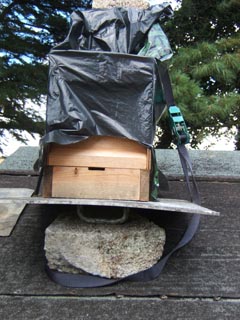 As I said last month, nature would not be so stupid as to allow the bees to starve by not providing weather conditions, at least at some point, suitable for plants to secrete nectar and yield it to feed the bees. She isn’t! The month of August proved to be the saving of our bees – at least for now! They have been bringing in nectar in a frenzy, making up for lost time, even to the point where I have been able to take a small honey crop from most of my hives after the bees had filled their brood boxes. Nothing like my normal take, though.

In fact, only about a quarter of what I normally get, I would say. Whilst being better than no honey at all, this still leaves me low on reserves, so I am being very cautious as to where it all goes – it will need to last me until next May, at least, and as some of my commercial customers expect a continuous availability, I will have to monitor supplies quite carefully. Anyway, the bees now have enough to see them through until the ivy and asters start to flower, which could be any time soon, and they are still foraging for nectar and pollen on the drier days, so that is good news. But it’s really strange, the temperatures have not been at all bad, considering, so the plants are still producing nectar. It just depends on there being a sufficiently long dry-ish spell after the rain to allow the bees to get at it. 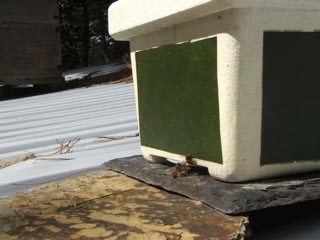 After removal of the honey, the next step is to treat the bees for Varroa. Varroa is an insect that lives on the bee and its brood, so can’t be totally eradicated with an insecticide, as it would take a dosage rate that would also kill the bees. All we can do, if we are treating with insecticide, is to use a low dose that will kill some of the mites, thereby reducing the mite load on the bees to a level that they can cope with. I don’t use chemicals in my hives – on principle – as I don’t like the idea of mixing such things with honey that I, and others, wiil be eating. Instead, I use an innocuous treatment of icing sugar dusting. By dusting all the bees (no, not one by one – a frame at a time!!), the bees are encouraged to groom one another to remove the icing sugar (which, of course, they eat – another benefit for them) and in so doing dislodge the mites. 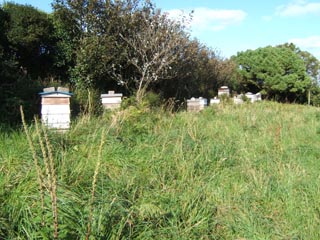 Additionally, the pores of the mites’ feet, which are sticky and allow them to attach themselves to the bees bodies, become clogged and they can’t maintain their grip. In both cases, mites drop to the floor and, if it as an open mesh floor, drop through the (less than bee-size) gaps into the outside air, where they die (they can’t live for very long if not attached to a bee or a bee larva). The hives thus treated seem to take on a new lease of life after dusting and appear re-vitalised, flying a lot more actively than before treatment – though during dusting it’s quite a sight to see all these ghostly-white insects flying around the hive! The dusting is done three times over a nine day period to match the development cycle of the mite and at the end of the nine days the mite load has been reduced to a level that the bees can more readily cope with.

It might seem strange that sometimes the strongest colonies (especially from a honey-yield point of view) have the biggest problem with mites, but this is a reflection of the way the mite replicates itself inside the sealed larval cells of the bees. So the stronger the colony, the more brood, therefore the more mites that are born – and it is these colonies which are likely to succumb (and die) if not treated. So Varroa treatment is a “must do” part of beekeeping – it has been since about 1992 when the mite was first found on our bees (in East Devon, interestingly), and will be until we find a way of totally eradicating the parasite from our bee colonies. 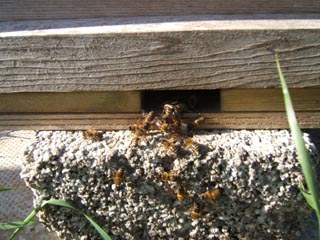 Finally, what of my mini-nucs and their new queens? Unfortunately, one of the queens has died (no obvious reason, it just happens sometimes) but the others are fine. One is currently being united with a standard set of nuc frames, ready for transfer into a full-size hive, so they can build up during September (with appropriate feeding) ready for the winter. When I set the double-tier hive on the bee-shed roof, it had been a beautiful warm day, so I did not think about rain. That night and the following day, it poured down! The roof of the nuc hive is flat, with a ridge around the edge for re-inforcement, and I was lying in bed, listening to the rain thinking “OMG, they’ll all drown!”

So first thing next morning, I mopped up the excess water retained by the roof edges, and covered the whole lot in a bin bag! It works perfectly and the bees are flying without a care in the world – though I’ve never seen bin bags advertised in the bee supplies brochures!

Swarms? Unlikely this year, I think, as the colony sizes have all been reduced by the bees stopping the queen from laying when there wasn’t any nectar being brought in. So maybe a peaceful month or so ahead, once the ivy starts – we’ll see!