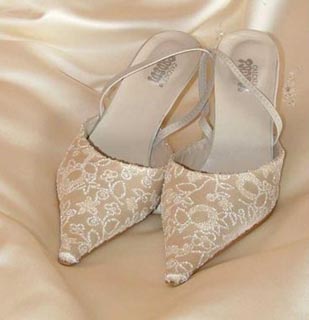 On the Thursday before our wedding, I was shopping for shoes. This felt like a fairly high level of organisation by my standards, but the shop owner’s horror when I told her that they were to wear on the Saturday and that I was the bride told me otherwise. Similarly concerned looks crossed the faces of visitors to the workshop in the weeks leading up to the launch as they looked at how much we still had to do and wondered aloud if we’d be ready in time and as the 19th August got closer and closer we began to do the same at times. But it’s amazing what a deadline and a large bottle of acetone can achieve….

Happily this was not the only parallel to be drawn with our wedding day; despite the endless rain of the week leading up to our launch day we were blessed with beautiful blue skies for the day itself, which coupled with the champagne and the enormous white dress I was wearing made me feel like it was June 2006 all over again. Unfortunately nobody gave me any diamonds last Sunday, which I think was a bit of an oversight. In all seriousness though we could not have asked for a better, happier launch day and we are still working our way through photos and trying to take it all in. 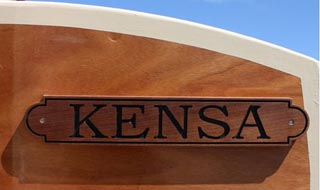 The last month of boatbuilding was hectic. There were so many jobs to do once we turned the boat over, so that although we finished the structure of the boat quite a while ago now decks, rudder, sole boards and lockers have all been added in the last few weeks, along with much sanding, epoxying, painting and varnishing. One of the nicest things has been working with materials or tools for the second time at a much later stage in the project and being able to see how much we’ve learnt. Fibreglassing the decks was so much easier and quicker having had the chance to learn how the materials behaved and worked best. There were a couple of jobs that had to be left until the last minute, like putting on the last coat of antifoul, and some things that frankly we didn’t have time to get done until the morning of the launch. We made a decision to leave rigging and ballasting until after the launch; although we were working with Si’s designed waterline we wanted to see how she floated and handled before drilling large irreparable holes in the deck. 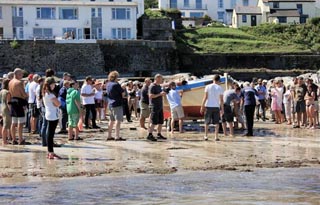 So the morning of launch day saw us up at the workshop putting on cleats and fitting fairleads while an increasing number of friends and family turned up. Getting Kensa out of the shed was the next thing to do which was not as easy as it might sound, given that the doorway was only three inches wider than the boat. But it all went fine, and with the help of scaffold poles and boards to roll her on we got her down the path and round the corner to the closest place that could be reached with a trailer without scratching or breaking a thing. We had so many lovely people helping us and we’re so grateful to Bob and Robin Edwards for making the move from the workshop to the beach happen so smoothly. 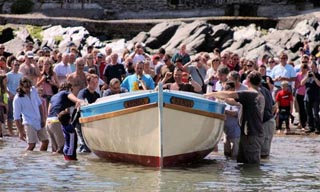 Once the boat was on the trailer, with about an hour to spare before launch time, we finished off cleats and breathed a sigh of relief. We also stood back and had a look at her for the first time ever from more than about two feet away; the workshop’s size meant we were always working on the boat at close quarters to so it was very exciting – if not a little surreal after very little sleep and a week of very long and paint solvent filled days – to properly see the boat we’d built for the first time. 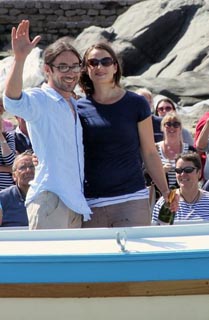 We really weren’t prepared for was the sheer number of people who turned up to see her launch. Robin hitched Kensa up and began driving her down the hill from the quarry to Tatum’s but it wasn’t until we were about halfway there that I turned around from where we were sitting in the cab next to him and realised that there was a little procession following us down, which grew the closer we got to the beach, where another little crowd was waiting. I looked around at one point while were getting Kensa off the trailer and onto boards to launch her from and I could hardly see a beach for all the people. We never for a minute expected so many people to be there, but we’re delighted about it.

We opened a bottle of champagne once we’d had a chance to say a few words, which were slightly curtailed by the over zealous cork which leapt out of the bottle narrowly missing Simon’s eye before I had the chance to do any exciting Formula One style shaking of it. Hopefully an auspicious start…. We poured some of it over Kensa’s bow and saved a little bit to pour in the sea for Neptune. Apparently it’s also good luck to throw coins in the sea when you launch a boat, so I’d picked up a couple of old pennies that we’d found in the workshop when we moved in and threw those in as well. And then we launched her, pushing her into the water in the old fashioned way. We’d laid down planks as far as they’d go and were going to stop at the water’s edge and move them forwards, but in the end she slipped so beautifully over the sand we just kept going until she floated. We had a short row around the moorings before beaching her again and being fed champagne for the rest of the afternoon by our friends. We should do these boat launches more often. 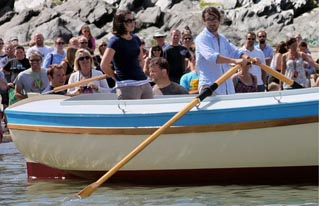 Sitting on the mooring at the end of the day when most people had left the beach and it was just a few of us left and looking at Portscatho from the sea on the boat we’d built was a very special moment indeed. The support we’ve had from everybody here, over the past few months and on launch day itself, has been overwhelming. Thank you all so much.