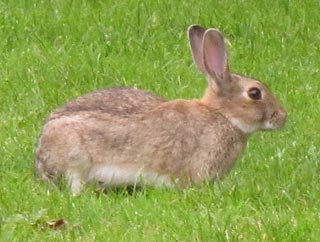 I seem to have spent much of August at war with pests. More rain and some warm, damp evenings have heralded party time for slugs and snails. They seem to appear from nowhere but inevitably they have been hiding from the sun in the stone walls and breeding like rabbits only to slink out when the damp weather returns. The aforementioned rabbits are not a problem to me. We are surrounded by them in the fields but our cats seem to do the job. Rarely do they catch one but just the smell of cats seems to keep them at bay from the garden. Joining the snails on an outing to Trewartha are the caterpillars.

There is much talk in the media about the decrease in butterfly numbers and in late spring and early summer I would have agreed, but they have all arrived, (together with the tortrix moth and red spider mite) and whilst I love them dearly I am not keen on the ghastly caterpillars they leave on my summer planted spring cabbage, purple sprouting and even on the thicker leaves of my sprouts. I could net the whole crop but somehow I never get round to it and so I regret I have to squish a few. 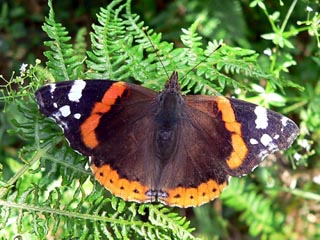 I do not spray edibles even with the organic mixtures. I also remembered my own good advice to plant nasturtium seeds in the hanging baskets in July. If we have a wet summer and the flowers look bedraggled then the new leaves and flowers of the nasturtiums are a real joy but again the butterflies see them only as a new home for their caterpillars. I must net the greens next year, squishing is a ghastly process and we need the butterflies.

Still on the subject of pests, you can hear the regular bang of the gas guns that the farmers use to deter pigeons. Now this is the one pest that I don’t get in the garden despite the cabbage and cauliflower beds. I am told they don’t like to feel confined and must have a clear flight path out of the veg patch so my long raised beds with narrow paths obviously act as a deterrent. I really haven’t been bothered by them at all but last August was a different matter.

I was late home just having finished a stint with Veryan Players in Portscatho. My weary arms reached out to close the bedroom curtains and there, bold as brass, was a very wet and bedraggled pigeon sitting on the Chapel guttering. I rapidly pulled down the sash window, clapped my hands and yelled at him like a banshee. He turned his weary head and looked at me with one eye as if to say ‘yeah, what? Keep the noise down.’

He wasn’t moving and having consulted my husband who was more interested in turning in than turning out to play pigeon deterrent, I was advised firmly to ’shut up and go to bed.’ 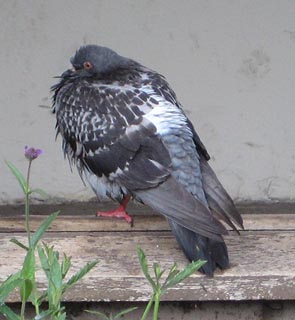 Next morning, ‘Percy’, was on the Chapel roof but had clearly spent a great deal of time on one of the window sills and what a mess he left. Stuart advised me that both his legs were ringed and he was probably a racer. Now Percy was very pretty, but I am not keen on pigeons. Several years ago in London some office friends of mine become very ill and it took some time to realise they had been bitten by pigeon mites because they had had the windows open and the birds had merrily sat on the ledges close to their desks.

However I digress, on the Tuesday Percy was still there, pacing around on the roof though looking a little more perky and judging by the by now huge piles of mess he was definitely eating somewhere – (probably my wheat field as the cabbages were left untouched!), I consulted the internet and found a telephone number for a lady in Falmouth who used to have racing pigeons and although very helpful and much amused no progress was made. So I rang the Vets who were very helpful and said ring the RSPCA or the Bird Sanctuary in Mousehole.

The RSPCA declined to answer the telephone because I used the non urgent option, but the Bird Sanctuary was superb. An extremely helpful lady told me that even if I could read the rings on his legs his owner was unlikely to want him back as he clearly wasn’t much good! Equally that I should catch him, put him in a box and take him to her, but with the full knowledge that as he had been here 4 days he would probably return as he may now have ‘homed’.

Oh heck, as if snails, slugs and caterpillars aren’t enough, I discover the chickens had been attacked by red mite (I sorted that one) and now I have a homing pigeon in the front drive! Apparently my only chance of getting rid of him was if a flock of pigeons flew over and he joined them. Well the gas guns are deterring them and as I said I don’t get bothered by pigeons. I had not fed Percy as he was clearly finding food but I did give him water because, as the lady said, he has to be fit before he will leave and there is a fine line between encouraging him to stay or to leave. Ten days later he was still around on and off but I got the distinct impression that we were not going to be a permanent home, thank heavens. Pity the slugs, snails and caterpillars can’t make the same decision. 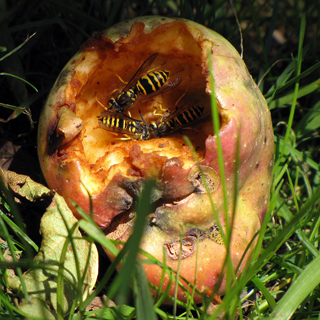 Just like the farmers the biggest job now is harvesting. The apples are early and attract wasps if you don’t pick or pick up. The runner beans, tomatoes an

d cucumbers are still producing and the damp this summer has encouraged the weeds. Get back into the gardening habit now, August is over and after the weeding there are roses to take cuttings from, herbaceous borders to start looking at for splitting the perennials.Its not too late to plant spring cabbage plants and of course there is the lawn to

rake to remove the top thatch.Daffodild,alliu and crocuses need planting,oh and don’t forget Christmas is coming so plant prepared hyacinths!

The list is long for one of the busiest months of the year. Of course that is after you have won the prizes at the local Shows with your flowers and produce. Don’t forget to support the shows however small your contribution. The committees do a grand job and deserve our grateful thanks for keeping this great British tradition alive.