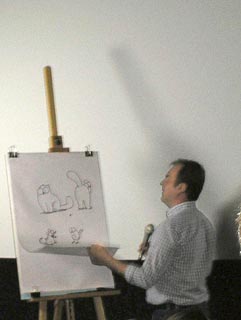 01.11.11: I was fortunate enough to attend the recent première of Double Trouble in Leicester Square, when the new book was launched. As well as being able to watch three of his earlier films on the big screen, Simon himself introduced his latest mini-blockbuster.

Inspired by TV cartoons, he started animating when he was very young, creating basic flip-books in an attempt to copy what he saw on screen. He has always been keen on animals, British wildlife in particular, he also enjoys painting, the great outdoors and, no surprise this, he loves cats. To his great delight he was recently invited to become Patron of Stray Cat Rescue.

Although the audience at the première was uncritical, the artist was far less so, assuring us he could see several glitches in his drawings, particularly the early ones and, in a delightfully frank Q&A session, I also learned that Simon’s cat is not too proud to undergo the slightest touch of airbrushing when the situation calls for it, that Simon’s drawing pens come in bulk from Tesco, and that it takes around seven weeks to complete a film of one to two minutes in length.

We heard “live” all the various cat and human sounds which add so much to the films and watched in awe as, within seconds, Simon drew on newsprint all the key characters from the books and films. 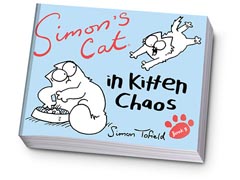 Before leaving I took the opportunity to thank Simon for his morale boosting work and, while he dedicated a book for my wonderful vet, we chatted about my [late] cat’s fishing expertise – he generously brought in through the cat flap fish he caught in nearby rock pools; when I failed to appreciate the gesture he kindly drew it to my attention by leaving one in my shoe. If Simon’s next film features a hysterical woman, a very irritable fish and a bewildered cat you’ll know where the plot came from!

As if that wasn’t enough, my “goody bag” contained a signed copy of the latest book and loads of otherSimon’s cat treasures. It’s no exaggeration to say that every single member of the audience left Leicester Square smiling. Thank you, Simon!