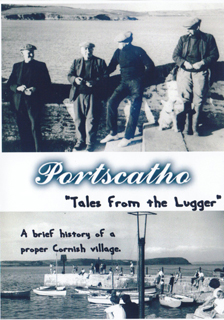 A new film about life in Portscatho through the lens of Buttz Yoddles has been produced and is now for sale.  Roseland Online has been catching up with its producer and asked him why he decided to make the film which intruduces us to a number of unique Portscatho resident, past and present!

“As a child, growing up in the East End of London, I could not comprehend why my mum had decided to move away from Portscatho for the ‘greyness’ of London. All our Summer holidays were spent down in the Village which was the highlight of the year and left us with the most amazing memories a child could hope for. Back then the train journey took 9 hours and we were met at St. Austell station by Granfer Fred Nicholls, we stayed at 3 the Lugger where the front and back doors were always open. There was an endless stream of friends, relatives and kids running in and out.

“My Dad had acquired an 8mm movie camera,.. which was loaded with a film that lasted 5 minutes,.. so we were told to only film things of interest,.. using short bursts!! It really was quite an expensive hobby back then,.. even sending the films off to be developed was a waiting game,.. not knowing what had been captured,.. or even if it was in focus at all! 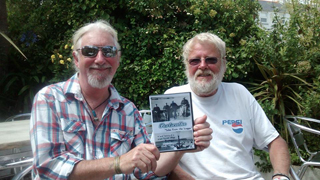 “Through the years, I made sure these old cine films were kept safely,along with my family photographs. I always knew they were precious, the closest thing to a time machine we have. I also knew that technology was ever changing and that, one day, I would be able to do something with the old footage. This day came this year!

“So… with the help of cousin, author and Gerrans boy Chris Pollard, Portscatho boy & Mayor of St. Austell, Derek Collins, historian Peter Messer-Bennetts, local legends  Dougie Chaffin, Elsie Neal, Pearl Sutton and my own Mum, Sheila Nicholls, I asked to be told the Tales from the Lugger…  and got more than I expected. It developed into a charming picture of Village life, from the turn of the Century,.. through the wars, to the great Carnivals from the 50s to the ’90s.

“I am hoping the film will appeal to a wide range of people from locals to passing visitors and anybody who has an interest in social history. It’s a slice of Village life preserved forever on disc and an interesting historical account of this wonderful quiet little fishing village. ”

Those wanting a copy of the film can purchase one  at www.buttztv.com via its online shop.