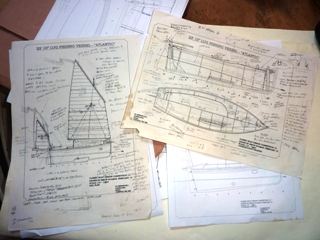 It’s strange to think that this time last year I was sitting down to write my very first feature for Roseland Online! Kensa didn’t exist, except for as a (at the time not quite finished) drawing. I had a sketchy understanding of how we would be building her and a vague appreciation of the tools and materials involved. We had no workshop, no scale models of the boat and no real useful knowledge of fishing beyond a bit of luck with some mackerel while out sailing for the day. And I remember writing about what a steep learning curve 2012 was going to be….!

If it’s possible, that curve has been even steeper than I had imagined. I’ve probably learnt more over the past year than I have done since university and I’m

fairly sure Si would say the same. I’ve learnt about tools and materials; how to use a plane properly and how to fibreglass. I’ve learnt about different kinds of fish; how to gut them, fillet them and cook them. I’ve found muscles I didn’t know existed aching after days of sanding and energy I didn’t know existed after days of paint solvents and varnish! And most importantly of all, I’ve learnt that if you put yourself out there with an idea and ask for help, then no matter how unrealistic or unlikely it may seem, people will tweet you 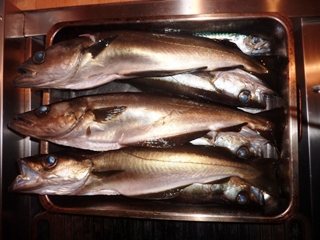 , email you, blog, Facebook, phone you or call you over in the pub for a chat to give you a hand. We’ve been amazed and delighted at the amount of support we’ve received since we started and our launch day back in August was a real reminder of that. So really I just wanted to thank you all for following us on our journey so far. We’ve still got a fair way to go, but we’re looking forward to 2013 and everything it might bring. Ideally, quite a lot of fish! 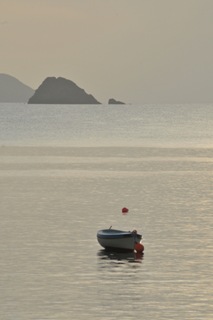 I’m writing this before Christmas, so with everything that’s been going on and the weather we’ve had there isn’t a lot of news from us and Kensa to add to last month’s update. So, I thought instead I would finish with one of my favourite Cornish Christmas stories, which is set in the little fishing village of Mousehole. You probably all know it well…. Many years ago one Christmas time, the village of Mousehole was battered by storms. The seas were so big and the wind so strong that no boat could safely go out to sea and fish. Days and weeks passed and people began to grow hungry as food stocks went down and no fish was landed. Then one day, legend has it, an old fisherman called Tom Bawcock – a widower with no family – decided to risk his life and put out to sea. The gale was still blowing and his boat was tiny against the huge waves rolling in, but he managed to return with enough fish to feed the village and put an end to the starvation. Which is why in Mousehole, every year on 23rd December, Tom Bawcock’s Eve is celebrated with lanterns and lights and a feast of fish to pay tribute to Tom’s bravery. Frankly, given our fishing efforts so far, we’d need some kind of miracle to feed an entire village with our catch, but I hope that by this time next year we might be a little bit closer to it. Merry Christmas and a Happy New Year to you all!