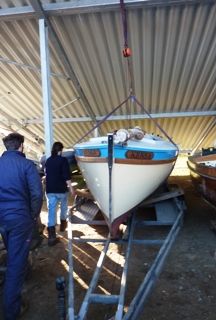 Some of you might have noticed there was no news from us last month. Unfortunately due to family illness we’ve been away quite a bit and had to take a break from Teach a Man to Fish for a couple of months. But we’re home now and looking forward to starting fishing again very soon. So this month’s update is just to let you all know where we’re up to and what our plans are and to look ahead (on a chilly, somewhat windswept evening) to calmer seas and sunnier weather… and ideally lots of fish! 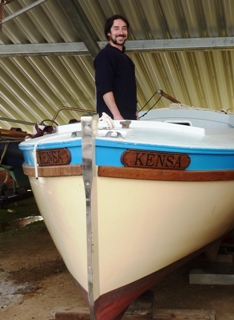 Before we went away we took Kensa out of the water to dry her out as we’d noticed a small patch of dampness in the water ballast tank area. The water ballast tank is an ingenious little feature that Si included in her design to improve her performance and stability in a range of conditions and to allow her to be as seaworthy as a much larger boat in heavier winds and seas. It’s an enclosed tank space in the centre of the boat which is filled with sea water via a seacock and pumped out using Kensa’s main bilge pump. You can see it in the picture below; it’s the unpainted section next the person asleep. I have no idea who that is. In average to stronger weather conditions we’ll be keeping the tank full of water in order to keep Kensa stable and floating to her designed waterline and in calm conditions or when we have the whole boat heeling with fish (obviously this will happen ALL the time…..!) we will pump out the water to empty the tank and make her lighter for rowing when there’s no wind to sail or to keep her floating higher if we are weighed down by a catch. 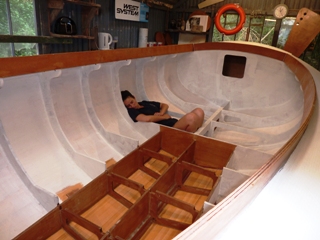 So, all of this means that the tank area is constantly wet. We decided not to seal up the tank completely before we’d finished rigging and testing Kensa out so that we could have plenty of opportunity to check everything was working as it should be. As it was, despite having coated the planks inside Kensa with two layers of epoxy we were slightly concerned to notice slight discolouration on a small area of two of the planks in the tank area which suggested it was possible some water was seeping into the planks from the inside. Having emptied and dried the tank completely while she was still afloat, we’re happy we’ve eliminated the possibility of any water coming in from outside (and I’d like to see it try, given the layers of fibreglass, epoxy and paint it would have to get through!). So we decided the sensible option would be to get her out of the water and fully dried out before lining the tank with a layer of fibreglass. This way we’d avoid any niggling concerns about possible water ingress once we were fishing properly and using the tank every day. 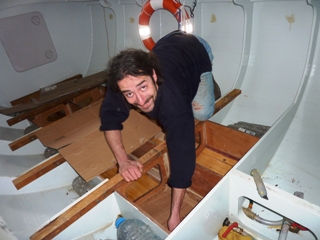 We’ve got the glass cloth panels cut to size, the epoxy keeping warm in our house (it’s become a dubiously semi permanent fixture in our living room!) and we’re just waiting for some slightly warmer weather to get the job done. Although it’s not too cold for working outside or painting, epoxy resin is difficult to work with in low temperatures. It becomes very thick and slow to react the colder it gets and if it’s applied to cold surface or in a cold ambient temperature it may not fully cure properly, which can lead to a very bad fibreglassing job indeed. And unlike a bad paint job, which is bad enough in itself, rectifying a bodged bit of fibreglassing is nigh on impossible to do well, not to mention costly! So although we can work small wonders with a tarpaulin and some fan heaters, a starting temperature of above 5 degrees would be good! 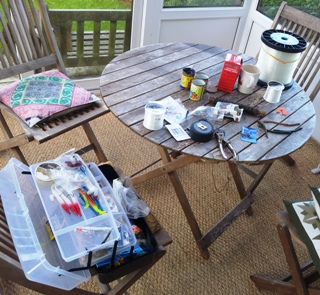 The good news is that once that’s done, we’re ready to relaunch Kensa and get fishing! There will obviously still be quite a few teething problems to overcome, but we’re sort of looking forward to that too, in the knowledge that sorting out any snags and reaching a point where we can sail and fish effectively from our boat is an exciting challenge in itself. We would have liked to have made more progress with that by now, but given the weather we’ve had for the past few months I’m really not sure we’ve missed all that much. More easterlies anyone? 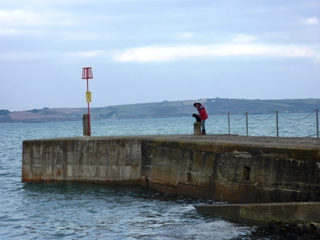 The other good news is that waiting for the weather to improve gives us time to get on with other things, like making up fishing kit, updating our blog and most importantly, training up our first employee and crew member Stella. For those of you who haven’t already met her (turns out she loves going to the pub… nightmare!), Stella is a ten week old spoodle with a penchant for chewing wood and ropes. Quite how this will work out on a wooden sailing boat I don’t know, but we’re hoping to channel this into knot tying, pot hauling and tea making capabilities before the year is out! So far she is showing every sign of loving the water – as she should do with a spaniel for a dad and a poodle for a mum – and now that she’s had all her jabs, we’re hoping to take her for a little row in the punt this week. In the meantime, here she is cutting her teeth on an off cut of Kensa’s planking and generally looking (not entirely accurately) like butter wouldn’t melt…. 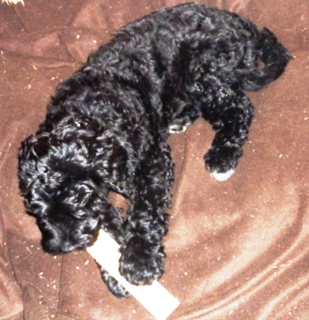