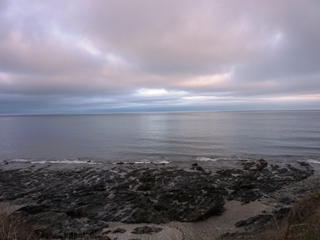 Since our update last month, April has thrown one gale after another at us since it arrived. So we’ve been getting on with other jobs; repairing boats and painting and demolishing houses. Different houses, obviously… Then just as we were beginning to despair of Spring ever arriving at all, the sun came out for a couple of days and the doom, gloom and doubt about our business choices came good again as we finally found some lighter winds and warm air! With this came a flurry of activity from us both and we’ve spent the last week collecting more potting and netting gear, sorting out Kensa’s summer mooring and picking up some of the fishing books again which had become somewhat dusty and untouched in the horrendous weather. 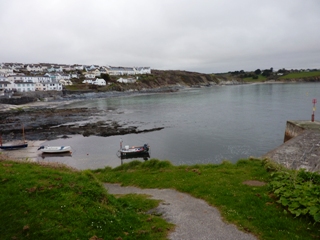 Our kitchen is once again harbour to an array of fishing gear and if I leave Si for a second he purloins a chopping board, a knife or our washing up bowl to use to make or store lines and nets. This morning the transducer for the fishfinder was in the sink and this afternoon there is a gill net on the kitchen table.

Si spent an afternoon last week down at Gorran Haven talking to a retired fisherman who had some pots and gear for sale. He had started fishing in the thirties, so of course remembers fishing under sail well. He was so helpful and full of advice, talking Simon through the various designs of crab pot and considering which would work best for us fishing without an engine. Nowadays, most boats have electric pot haulers, so the weight of lobster and crab pots is less critical than it was when they were being hauled by hand. 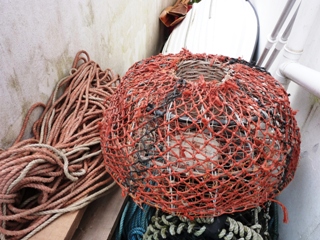 Si came back from Gorran armed with two pots, infinite lengths of rope and lots of stories. One thing that Mr Pascoe said that was taught to him by his grandfather particularly stuck in our minds. Apparently, when you start seeing slugs and snails about in the garden, crabs are on the move and it’s time to start laying pots again; a reference to brown crabs’ migration inshore in late spring. At the time, this seemed an unlikely prospect for the near future, but then last night while out walking the dog, I looked ahead at the path and realised it was full of snails on a kamikaze mission from the bank to the flowerbeds. Never been pleased to them before! 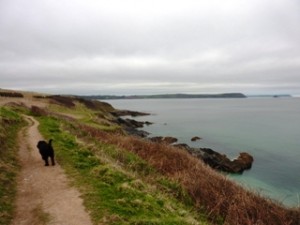 If anyone else on the Roseland has any crab pots, old fishing gear or wisdom that they’re interested in passing on, do let us know.

The last couple of months have taught us good lessons about the uncertainty of fishing. This was of course something we were aware of from the start, but I don’t think we’d fully appreciated how dispiriting prolonged bad weather can be when you have all your interests invested in a new business and you’re trying to make it work. All this is nothing new, however. For generations, Cornish fishermen have spent spells of bad weather (sometime entire winters depending on the fishery) working ashore as labourers, painters and decorators or in other trades, waiting for the weather to improve and fishing to start again. The other night I was re-reading ‘More Tales 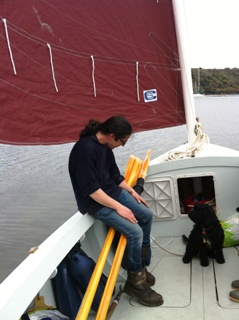 from a Cornish Lugger’, an excellent and highly amusing account of the Cornish mackerel fishery in the 1970s written by the lovely and brutally frank Paul Greenwood, a good friend of ours ever since we bumped into him (not literally) in Brittany on his Looe lugger Erin, while on our way home on Planet. The following passage sums up the last month beautifully and gives us much encouragement for the future: 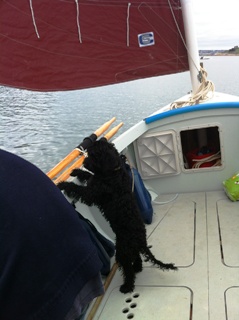 “A winter gale might be over and gone in twenty four hours. There again, it might last a week, or a really bad spell of weather could set in making it impossible to go to sea for a month. You never knew; life as a fisherman is a complete lottery. There are good times when you think you will never be poor again, and times when the boats are double roped and fendered alongside the quay as the storms run up through the Channel one after the other. […] It is then that you seriously doubt the wisdom of the life, but when the sun shines again and you can once more enjoy the freedom to range the Channel hunting the mackerel shoals, then bad times are soon forgotten and you wouldn’t swap your way of life with anyone.”