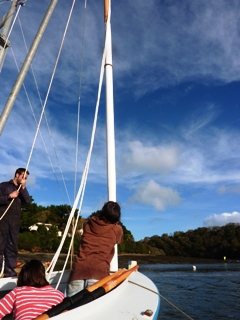 This month we have been mostly rigging our boat. Now if you’d asked me how long it would take to do this at the end of last month, I would have said a few days, a week at the most. But as with most other stages in our project so far, one job has a knock-on effect on the next and ticking one thing off the list has a habit of adding several others below it!

Si finished making up the main mast a couple of weeks ago and Robin and Debs gave us a hand to get it down to Percuil, where the Webbs had very kindly offered us the use of their crane to hoist the mast into Kensa. Surprisingly, this all went very smoothly and quickly, and before we knew it we had assembled the whole rig, albeit with various bits lashed in place until we were happy with where best to fix cleats and eyebolts. 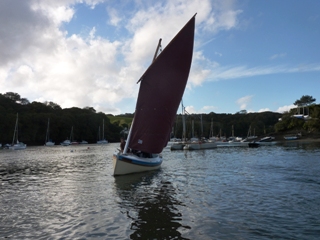 We had a short sail down the river to Kensa’s mooring and despite going upwind with the tide against us Kensa went really well. It was such an amazing feeling to be sailing a new boat for the first time, let alone your own boat, that you’ve built, at Percuil. The combination couldn’t have been better and we were all so overexcited by the time we got back on dry land that we had to go to the Plume for a bit to recover our nerves. 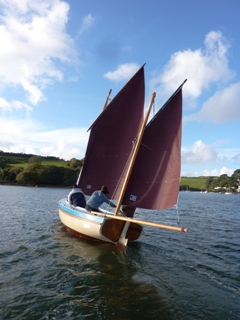 Apart from some obvious issues like the need to fit sheet leads rather than have to continue hanging onto the mainsheet for dear life, the only main concern we had after our trial sail was the main mast which was showing some signs of being slightly too flexible for comfort. Kensa’s certainly got plenty of canvas and it’s likely we’ll reef quite early in normal working conditions, but there will be times when we’ll be grateful for all the sail we can get and be glad not to be rowing, so for now we’ll keep the sail plan as it is. Instead, we decided the best option would be to wrap the bottom section of the mast in fibreglass to stiffen and reinforce it.

There was a certain urgency to completing this job, as we had less than a week before quite an important deadline. A month or so ago we got a phone call from a television production company who were making the second series of a programme called ‘The Hungry Sailors’, featured on ITV last winter and presented by Dick and James Strawbridge. They were keen to talk to us about the possibility of being involved in an episode of the new series, so we met with the producer and agreed to meet for filming last week. 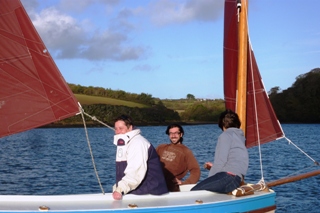 We explained we were very much starting out fishing and were still in the process of finishing rigging and testing everything, but that we were keen to involve people in our project as much as possible. If you didn’t catch any of the programme last year, it follows Dick Strawbridge and his son James as they sail around the coast on a pilot cutter, meeting local food producers and cooking on the boat. So we reinforced the mast and had a chance to test it out in quite breezy conditions before meeting the film crew last Thursday. There was a fairly fresh easterly wind, which meant we had to meet them in St. Mawes rather than Portscatho which would have been too exposed. Robin Edwards drove the film crew on Jane and we sailed on Kensa with Dick and James on board. We had a couple of hours of sailing, interviewing and fishing before heading back in as the light faded and the wind picked up. 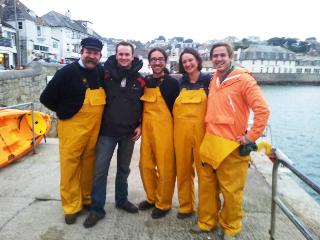 It was a slightly surreal experience to be taking Kensa out under full sail for the fourth time ever with a film crew following us, and quite a challenge to sail her well, smile, talk sensibly about our project and try to catch fish all at once. Somewhere between a job interview, a Funday game and an alarmingly convincing dream. We were shattered by the time we finished, but it was great fun doing it and an amazing opportunity which I’m very glad we took. And we managed it all without mishap, which frankly felt like a bit of miracle! 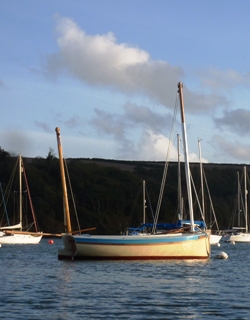 We didn’t catch any fish, but we’ll blame it on the presence of TV cameras and an east wind. Who knows how it will come across on television; I’m not entirely sure our concept was quite conveyed as there seemed to be some confusion over who we were teaching to fish and whether our boat had an engine, which slightly misses the point…. But at the worst we can all have a bit of a laugh when it screens and watch some nice footage of us sailing, so it’s all good! This week we’re off to Morwenna, the pilot cutter used in the series, to be cooked for by the Strawbridges. They want us to catch a bass for them; large enough to feed quite a few people, so that should be easy enough (not!!). Cross your fingers for us and you’ll be able to see the outcome when the series is screened on ITV sometime early next year! Although if any enormous bass leap onto our lines between now and next month, I clearly won’t be able to stop myself from proudly showing you all photos!