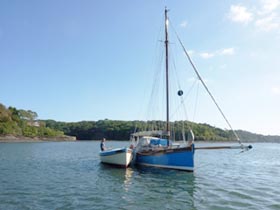 Well for once I’m not sitting down to write an update for Roseland Online which starts ‘It’s been a hectic month’. It’s been bliss after months of rushing and anxiously calendar watching for our deadline to have a few hours, days and even a few weekends free of boatbuilding. We finished August and started September with a bit of a holiday, just sleeping and enjoying the rest of the summer while getting the most urgent and fun jobs done on Kensa. We had some time to go sailing on Planet (the boat we went away sailing on for a couple of years) and spent a lovely two weeks living on her anchored off Percuil with Kensa tied up alongside. Planet makes a great floating workshop and we managed to get a lot done on both boats. 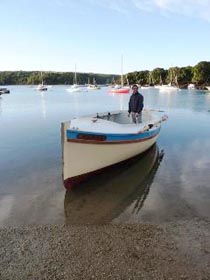 The biggest job was getting the mizzen mast and sail finished and rigged. Si went up to Collins Sailmakers and worked with Nick to get the sail finished while I varnished Planet’s hatch and cleaned up Kensa. Nick’s been so supportive and helpful with our project and we’re so grateful to him for all the time and resources he’s given us. The mizzen mast was still at the workshop, so Si gave it a few more coats of varnish and made up the step for it to fit through the deck and onto the foot we’d made and fitted before launch day. The weather was glorious, which made working outside really pleasant and easy and we had a beautiful Percuil morning to get Kensa on the beach to step the mizzen. 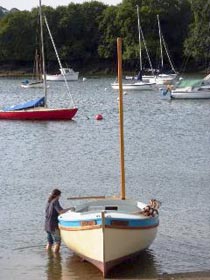 We decided that despite not having finished our main mast yet it was about time we took Kensa out on a proper trip, so a couple of Fridays ago we set about rigging the mizzen and getting the sail up. You might remember that on launch day the rowing situation was less than ideal. Given the size of our workshop, we weren’t able to test the position and height of the rowlocks before launching, due to the two foot clearance either side of Kensa in the shed while we were building her. So when Si started rowing round the buoys on the 19th we realised quickly that the rowlocks were fitted far too low for the oars to clear the cockpit coamings, which made for fairly awkward progress! We’ve since rectified this by raising the height of the rowlocks, and we may move them further inboard once we’ve tested them out a bit more. 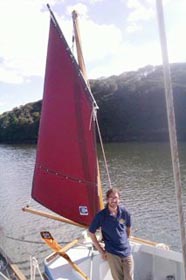 We had a great trip out from Percuil, rowing slowly out to just inside the lighthouse. The tide was against us but with two of us rowing into virtually no wind we made good progress. The wind filled in just as we reached the lighthouse, so having no mainsail up we decided fairly quickly to head into the shelter of St. Mawes bay before it picked up any more and we ended up getting stuck. Rowing into a reasonably fresh head wind was hard work and extremely slow and both of us looked at each other once we’d got inside Carricknath Point and said ‘We’re not bloody doing that again!’ But fortunately we won’t have to; had we had the mainsail rigged and up we would have been able to sail and make good speed. Just having the mizzen meant we couldn’t make any progress upwind, although heading back up river later in the day with the wind behind us was great. The mizzen filled nicely and Kensa sped along without any need for oars, which gave us an exciting taster of how she’ll handle under sail. We can’t wait to get the rest of the rig finished and go sailing! 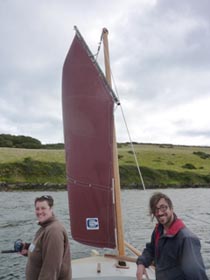 The main news of the day, however, was that for the brief time we were anchored off St. Anthony we managed to do some fishing! Actual fishing from our actual boat!! We put some feathers out as we got closer to the lighthouse and blow me down something only went and ate them! I was so surprised and excited as well as tired from rowing and possibly a little…ahem…hungover that I was fairly useless about dealing with the situation of a fish landing in Kensa. So the only photos we have of our great first fish are of me doing what I can only describe as squeezing a small mackerel with a look of rapture on my face! 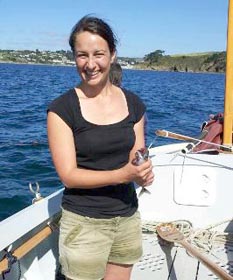 (It had been swiftly taken off the line and killed by then I promise!) We debated about what to do with it; suggestions ranged from stuffing it, casting it in epoxy and framing it, smashing it over the bow or just eating it, but in the end we cut it up and used it for bait to catch more fish. See how we speculate to accumulate! Sadly given the conditions we didn’t have much more time for fishing after that and our attempts to catch anything on the lines out behind us as we made our way back in were fruitless. Probably because we were doing about quarter of a knot at best…… Still, we can’t help thinking that a small mackerel is an appropriate and respectably modest place to start on our fishing odyssey. Mighty bass from little mackerels grow!