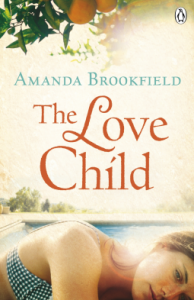 The Love Child by Amanda Brookfield (Published in paperback by Penguin, on 17 January 2013)

As regular readers of my column will know, I’m not a fan of women’s contemporary fiction, so it is praise indeed when I say how much I enjoyed this book. It may seem strange to say that what is basically a love story is so gripping, but I found The Love Child really absorbing.

It is the story of old friends – three and a half couples and a teenage daughter. Set in London, Spain and Sweden, it delves into their backgrounds and the complications of love, loyalty, failure, friendship and eventually (for some) personal growth.

Amanda is a highly regarded author, who doesn’t take her characters in the direction the reader necessarily anticipates. It’s the unexpected twists, the bleakness of day to day life as well as the sunshine, and the level of detail which raise her writing above the norm, so for example, Nina, who might otherwise have been relegated to a minor role, is described with real care and (I imagine) accuracy, and the descriptions of Dougie’s battles with alcohol seem incredibly perceptive. *****

Note: Amanda is a strong supporter of the children’s hospice movement and as part of a fundraising initiative in 2011, generously agreed to give a reader the chance to name a character in one of her books in return for a contribution to Children’s Hospice South West. So, many thanks to Amanda and well done Sam, the cat, for his supporting role in this story.