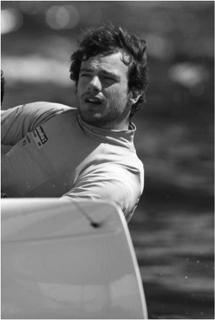 Firstly let me briefly introduce myself, My name is Tom Phipps and and am one half of a sailing team campaigning for the Rio 2016 Olympic games. Between myself and my team mate and fellow Cornish sailor Zennor Pascoe, we are aiming to represent GBR in the mixed multihull class.

Hopefully over the proceeding months you’ll get an idea of what trials and tribulations olympic sailing has to offer. But because ‘racingwise’ things don’t start to get exciting until March, I wanted to use these first few articles to introduce us and you a heads up on how Zennor and I have got to where we are.

In this article I want to tell you a little about me!

Zennor and I have only been sailing together for a few months now, but our histories are filled with the sea and sailing from and extremely young age for both of us.

My connection to the water started from the beginning. Without sounding overly clichéd, I can honestly say that I was literally on a boat before I could walk. The combination of growing up in one of the best water sport areas in the UK and my family running a sailing school business, paved the way for me… but I must say that it has been no easy ride. Whilst the environment was there, it has always been down to me to make it happen. 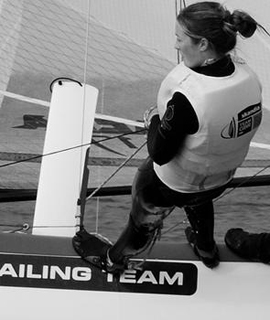 I am definitely a local-family boy and it is often hard to spend so much time away from my natural habitat, but the one driving factor has always, and will always remain consistent… Gold at the Olympics!

That said, whenever I get the chance, there is nothing I would rather do than be at home, camping out at Turnaware, Wakeboarding in the harbour and of course sailing with friends and family.

As I said, because of my particularly fortunate situation, my sailing career began very early on. There are many photos of a very chubby five-year-old Tom, 2up’ in a plastic optimist with my best friend Jon. Jon and I grew up sailing together and by the time we were ten, we had had enough of plodding around in our Oppies and wanted more speed.

Over the proceeding years, Jon and I dominated youth sailing securing two Golds and a Silver medal at the youth Sailing Olympics. As we progressed the demands from sailing increased and when a choice between sailing and education needed to be made, Jon opted for the latter.

In order to continue my Olympic dream, I teamed up with a new partner in the Tornado, which then was the current Olympic class. We had only been sailing the boat a few months when, in the build up to the 2008 Olympic games, the rug was pulled from beneath me. The Tornado, and only Olympic catamaran class, was dropped from the 2012 line up.

After what seemed like a huge blow to my dream of sailing a catamaran in the Olympics, I decided to concentrate my efforts on other areas of personal development and attended university to study engineering. For a boy who never planned to go to uni, and considering I didn’t think I was particularly academic, I was very surprised and please to graduate with 1st class honours and special recognition for my final year project.

Then, with the re-introduction of the “Nacra 17” Catamaran to the 2016 cycle – well timed with my graduation from university – it really did seem like the stars were aligning for me. 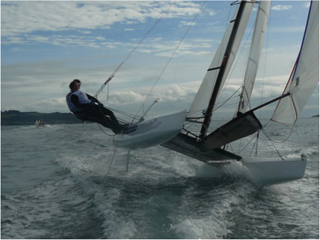 I have spent the last year crewing the Nacra 17 for previous Olympian Lucy MacGregor, but have now switched back to the – for me – much more comfortable and natural position of helming. I am now teamed up with fellow Cornish sailor, Zennor, and we are preparing to set the world alight at our first regatta in March.

I really do feel extremely at home on the water, and while I do understand the enormity and seriousness of what we are doing, it is so important for me to have fun and enjoy what I do. When your love and passion becomes your job, it’s easy to let it turn into a bit of a chore. Fortunately, between myself and Zennor, we are able to switch between serious and fun mode, making our time on the water productive and enjoyable.

After putting together a few Olympic campaigns now, I really do feel like Zennor and I have a great chance to do great things in the coming years.

In the next article, get ready to hear from Zennor about how she’s got to this stage, and what makes her tick. In the meantime, if you are out and about around the Carrick Roads, look out for a catamaran with white sails flying… that will be us!