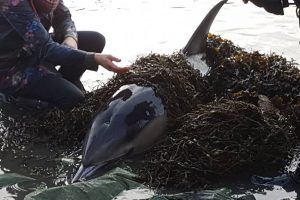 Two dolphins had to be rescued after stranding themselves in Froe Creek, off the Percuil River.

British Divers Marine Life Rescue (BDMLR) were called out at 11am on Wednesday 12th December to monitor the dolphins who were freely swimming and feeding  around the creek at Froe.  It soon became clear that something was wrong and the creatures ended up stuck in the mud, one  stranding itself a second time after it was freed.

Speaking to the press, Dan Jarvis from BDMLR said, “At around 3pm the behaviour of both animals suddenly changed and they moved in to the shallow water close to shore.

“The smaller dolphin became virtually inactive in the water, whilst the other actively tried to stand itself some 50 metres away. 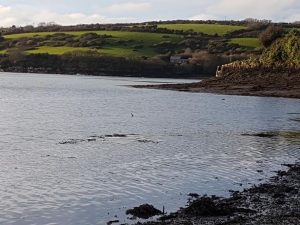 “The latter animal was initially helped back into knee-deep water, on the premise that it may just have made a navigational error, but to the dismay of the team it again stranded itself in the mud.”

It was decided that it would be necessary to bring the animal to shore to carry out a proper examination and this was done with the assistance of the kayaker.

Dan Jarvis continued, “A similar exercise was then carried out to remove the second animal and an urgent request was sent out for assistance from other BDMLR Medics to attend. Both dolphins were initially moved to a safer exit route for the rescuers and, having satisfied the veterinary criteria, the two animals were carried out into the water as darkness fell, and were successfully released.

“The pair were followed out to the main Percuil River by the RIB that had been assisting throughout and were last seen swimming towards the mouth of the Carrick Roads and have not been seen again in the days since.”

This story has a happy ending, but many will recall that the same area in the Percuil river was the witness to a mass stranding in 2008 which became the largest on record in the UK for this species, involving more than 70 animals.