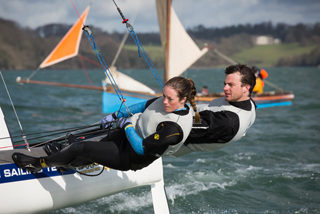 Well, hopefully by now, and from the last 2 articles, you will have a bit of idea of who Zennor and I are: two very determined Cornish locals aiming to do something incredible.

So now to the nitty-gritty. How are we going to go from sailing around in the beautiful waters of cornwall to standing on the top step of the podium in Rio?

Different to most other Olympic sports, in sailing only one boat can represent its country in each class. This means that qualification is incredibly hard and particularly in well established sailing nations like our own. In order to go to the games, you need to be selected, and in order to be in a position to be selected, you first need to be part of the British sailing team (BST). So there is a three stage process between us and gold in Rio. All of these selection decisions are purely based on performance, and each level unlocks more support and better funding.

Where are we now? 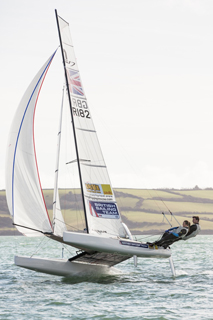 Since teaming up with Zennor, and since splitting from my sailing partner Lucy at the end of last summer, our national support and involvement with the BST has been limited. We need to reprove ourselves as a new team. The best way to describe our current situation is probably to say we are semi-part of the BST on the books, but need to show that we deserve our place before we can have a full program with the team.

Over the last four months, Zennor and I have been based out of Mylor, which despite the weather has been great. It has given us a good opportunity to sail regally and in an incredibly cost effective way. Between Mylor and Windsport they have provided fantastic facilities and, in my opinion, some of the best sailing waters in the world. Being both local has even made it possible to get out on the water in those short windows between the crazy storms we have been experiencing.

With all of this in mind, stage one of our world domination plan is to get ourselves back fully established within the National Squad giving us access more specialist support and funding. The BST host four boats in the Nacra 17 squad, which is currently full. So our only way in to to ‘kick’ another team out, to do this we need to be ranked within the top four GBR boats at the next quarterly review. And of course, in order to improve our ranking, we need to race. The first opportunity to race and start to show everyone what we are made of, is at Palma OCR (Olympic class regatta) at the end of march, which is coming up fast. 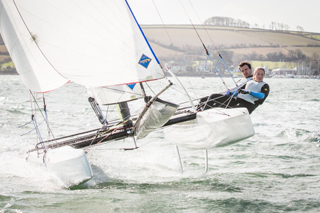 Once reestablished within the BST, it will be time to start climbing the funding and support ladder. This is based on performance and results. We will need to follow the Olympic circuit around the world and compete in the OCRs to secure good consistent results. It is likely that the federation will select 6 months prior to the games , a bearing in mind only 1 team goes the journey begins to out-perform the rest and establish ourselves as consistently the best British boat, get the Olympic selection and make it to gold in Rio.

Naturally as soon as we leave the comfort of cornwall in march, things become a lot more complicated but the biggest barrier for us is the hike in expenses. As I’m sure you can imagine carting a car, boat, kit and ourselves around Europe is rather an expensive process. Over the next year the campaign is likely to spend in total around £25,000. This is to cover areas like, travel, accommodation, entry fees and boat maintenance. As detailed earlier currently we have all but no national support, so Zennor and I are in the position of looking to raise private support and sponsorship to get this exciting journey going. Despite our current early stage in the campaign, this is when we are most reliant on private support. Once we are reestablished within the BST, while still necessary, private funding doesn’t become quite so fundamental to what we are doing. 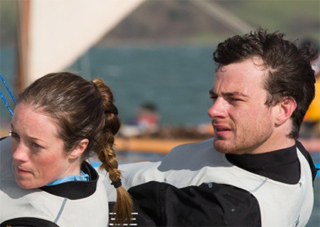 We now more than ever need to raise support, we have in place the opportunity for a number of corporate sponsorship levels, but also I would to point out the ‘personal donations’ page on our website (http://www.teamphippspascoe.com/#!personal-donation/c1ifh), where if an individual feels so, they are able donate a small amount, and help us on this Olympic journey. Zennor and I really are so wholeheartedly grateful for all the support we have already received, as currently this is the difference between us competing or not.

If any of you readers have ideas or contacts that you think may be interested in supporting the team, please don’t hesitate to get in touch, we would be so appreciative.

Thanks for all of your continued support, In next months article we will already have completed in our first UK event of 2014 and have traveled to Palma for training and our first OCR as a team. That will be a good one!

Have a look on our website at the videos we have recently posted from our winter training so far.